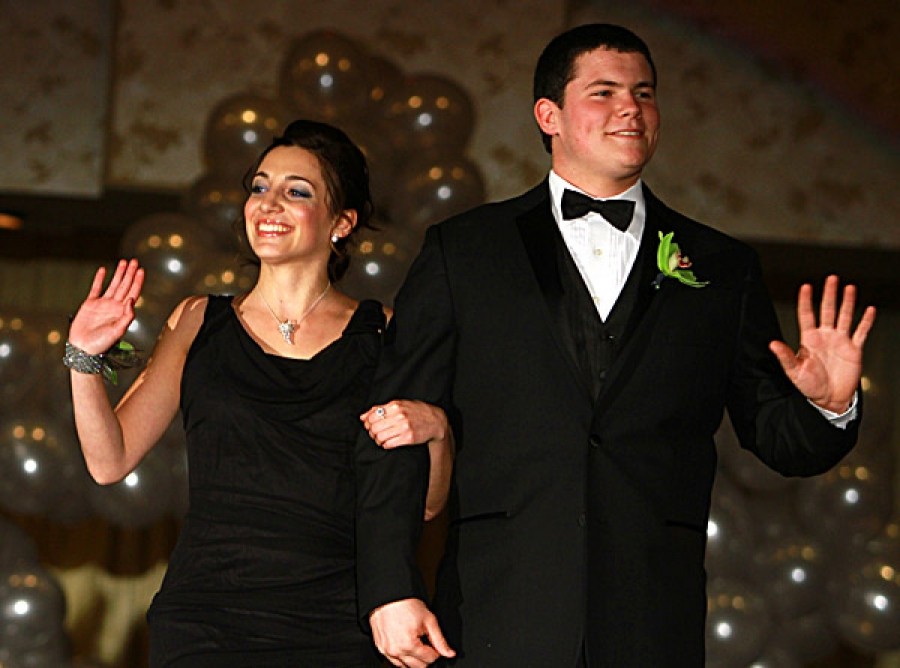 Sports have been Donlin's passion since a young age so all of those things have become routine.

On Thursday night, March 29, Donlin was elegant and formal as one of the models for the student fashion show that was held as part of Morristown High School's Project Graduation.

"I like both," Donlin said of playing sports and dressing up during the event at the Birchwood Manor. "I like looking pretty. We had our makeup done. It was really nice. Getting dirty is good, too."

Donlin, one of several female athletes to take part in the fundraiser, wore a full-length purple evening gown for the formal portion of the show. When she walked the runway in casual attire, she had on a teal maxidress.

Never nervous when on the court for volleyball or basketball or behind the plate for softball, Donlin, who will graduate in June with nine varsity letters, admitted to being a bit unsettled when under a different kind of pressure - literally having to walk the walk before 500 people.

"I had never done anything like this but it was great because it brought everyone together," she said. "It's my senior year so it's the last hurrah. It's sort of a prom before the prom."

Morristown's Project Graduation is in its 24th year. Funds raised from the dinner, raffles, gift auctions, a 50/50, journal ads and donations from families, friends and local businesses will go toward a safe alcohol-free and drug-free party for the school's 355 graduates on June 21, 2012 at the Parsippany Hilton.

"It's great for these kids to have the experience of being a model," said Donlin's mother, Joanne. "What's most important is that they're raising money for the whole class."

Samantha Southard, co-captain of the golf team and a first doubles player for the tennis squad, was anxious as well. She compared modeling to playing sports and drew on her experiences on the course and the court.

"Nerves were a factor, just like they can be when I'm playing," Southard said. "I had to prepare mentally. I have a routine in sports and I had one here. I had to know when and where to stop and know the poses. Our uniforms were dresses tonight."

She enjoyed the opportunity to "dress up" and was grateful to all the parents who worked on Project Graduation.

Jennifer Colvin, the sweeper for the field hockey team, was thrilled to be involved in the show, where the girls donned fashions and accessories provided by Blush Boutique of Madison, Say "I Do" Bridal Boutique of Caldwell and Operation Bling of New Providence. Flowers were provided by Elliott's in Morristown. The male models, also Morristown High School seniors, were attired in tuxedos from Cozy Formalwear of Morristown.

"I've known everyone here forever," Colvin said. "I like participating and it's all for a good cause - so we can celebrate the night of graduation together. We're all for Project Graduation."

Lauren Cataldo, who swims, specializing in the 100 butterfly and 400 freestyle relay, glided down the runway with the same ease she exhibits in the pool. And, just like at a meet, she had to overcome jitters.

"I was pretty nervous but this was so much fun," Cataldo said. "I get nervous before the first race then I swim and I'm fine for the rest of my races. That's how it was tonight. I'm glad to be involved in this. It's a great way to raise money."