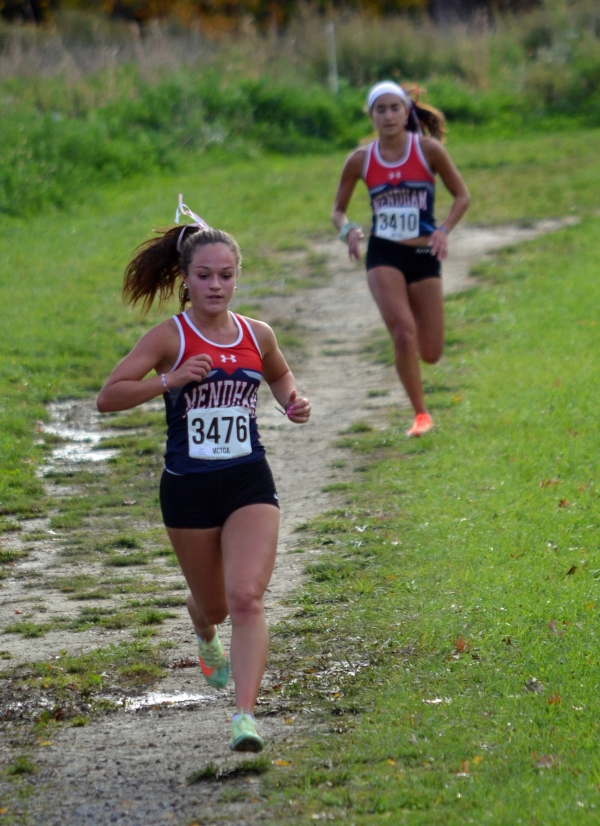 PARSIPPANY _ Since fifth grade, Central Park has provided many fond memories for Mendham's Grace Vives and her teammates.

Vives, now a senior, and the Minutemen added one more on Wednesday, Oct. 27, capturing the girls team title at the Morris County Cross Country Championships at Central Park. Vives took second while teammates Ava Augustine, Megan Smith and Madison Orlins finished third, fourth and sixth for Mendham, which had 31 points.

Sarah Petitjean of Chatham, the winner of the NJAC Large Schools Race last week, was first in 19:09.79.

"Coming in, I knew we had a chance to win it," Vives said. "We won when I was a freshman and sophomore. There was no meet because of COVID last year so... We really wanted to go out with another championship. This is our last race here at Central Park so it was special."

When Vives,a co-captain, and her teammates started out, they were part of the Mendham Magic program. Running at Central Park was always a highlight and they wanted to make sure they excelled in their finale.

Petitjean quickly took the lead and maintained it while the Minutemen stayed together. Each of the Mendham runners in the top six clocked in under 20 minutes.

"Our top four were really close in time," Vives said. "We rotate who wins for the day. At the third mile, we changed who was in front. It's good to be together."

When the Mendham runners pass one another, they often give their teammates a pat on the back or a word of encouragement. Still, there's rarely much difference between them as they prefer to be in a pack. They're hoping the strategy will benefit them as they head into the state meets.

"We believe in the team aspect and I'm going to miss that a lot," said Vives, who plans to attend Bucknell and be a member of the cross country squad.

The meet was postponed by a day because of a nor'easter that drenched New Jersey and much of the East Coast on Monday and Tuesday. That meant there was plenty of mud on the course.

"Sometimes, we had to slow down," Vives said. "We wanted to get out fast so we wouldn't get stuck."

Petitjean, a senior, had the same concerns as did everyone who was running. She kept her arms up for balance and it worked as she didn't slip. Petitjean also hoped to get out in front immediately so that she wouldn't have to jostle with her competitors.

She was pleased with her time - 19:09.79 - and took advice from her junior varsity teammates who ran before her.

"They told me to run through the mud and not go around it," Petitjean said. "It wasn't really that deep. It was very muddy so I wanted to be by myself. That way, I'd only have me to worry about."

The postponement of the championships stressed Petitjean out and she couldn't stop thinking about it. She "zoned out" in class and resisted eating ice cream all weekend, reminding herself she had a big meet.

"I had to take extreme precautions," she said.

With the meet and another gold medal, Petitjean, unbeaten at Central Park, finally was set to indulge. Her reward? She was planning on chocolate moose tracks ice cream at McCool's in Madison.

"It's amazing," Petitjean said. "I was a little worried when the meet was changed. I had to be aggressive and confident. I had to push my body. I knew I could run with Mendham. We're pretty evenly matched. Knowing that made a difference. I'm so excited to be the county champ. It's the first for Chatham in a long time and it feels good."