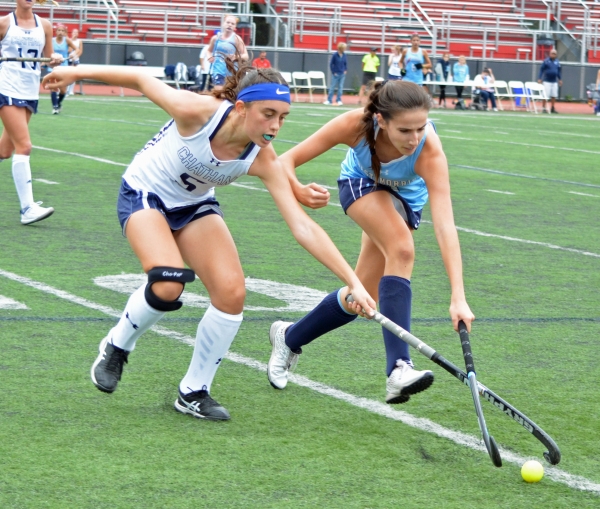 Photos by Maryann Harlow Brooke DiBiase, left, scored Chatham's first goal in a 2021 MCT semifinal.
Rate this item
(8 votes)
Tweet
BOONTON _ Recognizing and writing down fears has long been the first step in attempting to overcome them.
Chatham took the practice several steps further after its workout on Friday. The players wrote what upsets them on white ceramic plates then smashed them to ensure the fears would disappear.
The motivational session was a great success and several Cougars players felt it played a significant role in their 2-0 victory over seventh-seeded West Morris in the Morris County Field Hockey Tournament semifinals.
In the second semifinal on Saturday, Oct. 23, top-seeded Randolph shut out fifth-seeded Morristown, 2-0, behind goals by Gianna Drake and Anna Stock.
Junior left forward Brooke DiBiase, who had a goal and an assist for Chatham, loved the plate-breaking activity. One of the words DiBiase, a dynamic player, wrote on her plate was “frustrated.”
“I sometimes hold back and things get in my head,” DiBiase said. “I let things get to me.”
Not anymore. This time, the plate wound up in pieces, not DiBiase, whose goal with 6:49 left in the first quarter staked Chatham to a 1-0 lead. DiBiase tipped the ball into the left post from near the stroke line following a pass from Kate McManus.
“We were so psyched,” she said in reference to the motivational session.
She felt that recording the first goal set the third-seeded Cougars in motion.
"It was important to get that goal," DiBiase said. "It got us really, really excited. We always say it's 0-0 anyway so we don't get took cocky."
Chatham, which split with West Morris prior to this semifinal, was thrilled to make it to the title game. In 2019, the Wolfpack blanked the Cougars, 4-0, in the MCT semis before securing the championship. Cougars coach Kaitlin Leyden is impressed with this group, especially because 12 seniors, nine of them starters, were lost to graduation.
"It's great getting the chemistry going," Leyden said. "The communication. The passing. Knowing how everyone plays. They all wanted it today. Our practices sometimes don't translate to what we want to do. West Morris is always good. Seeds don't matter. It was hard for us to get over the semifinal hump."
The third-seeded Cougars are headed to their first MCT final since 2010. Chatham will be seeking its third MCT crown. Randolph also is in pursuit of its third and its first in 18 years.
DiBiase assisted on Emmy Chazen's goal off a corner with 8:48 remaining in the third quarter. Chazen inserted the ball to initiate the corner play and went to the post, where she got her stick on a rebound.
Another key performer for Chatham was senior goalie Kelly Bernich (8 saves). After not seeing much action in the first half, Bernich's play was critical in keeping West Morris off the scoreboard.
"I never want to let the team down," Bernich said. "This was a huge game for us and I didn't want to mess it up. I really wanted the shutout and to have a great game."
Bernich sat out last season after playing as a freshman and sophomore. She had a nagging kneecap injury, classes were hybrid due to the Coronavirus and she wasn't sure she wanted to make the commitment. She decided to return after having a conversation in English class with her friend, Ellie Hilgendorff, one of the captains, last spring.
"Ellie helped convince me," Bernich said. "I really missed it. I strengthened my knee. It feels a lot better."
What did Bernich put on her hype plate? I'm not strong enough. I'm not fast enough to get there.
She'll be ready for another showdown with the Rams on Tuesday, Oct. 19 when the final is played at Boonton High School at 7 p.m.
"This feels so amazing," Bernich said. "I'm at a loss for words. West Morris is so great and so is Randolph."
The Rams triumphed with a dominant attack, taking 21 shots on goal. Randolph's offense flowed and passes were right on target.
"We had guts and hustle and heart today," Rams coach Gina Adickes said. "You can control the game but it's heart that pushes you through."
The sequence that led to Stock's goal was the perfect example of Randolph's precision and unity when on offense. The Rams traveled upfield as a team, with nearly every player having possession of the ball. Joelle Yurchuk set up Stock, who sent the ball into the right side of the goalcage with 10:34 left in the fourth quarter.
"I think just about everybody touched the ball," Stock said. "It feels really good when that happens. We work on it in practice. When that transfers to a game..."
Prior to Stock's goal, Randolph had an abundance of corners but some attempts went wide or were stopped by Morristown goalie Emma Jackson, who ended with 16 saves. Jackson and the Colonials' defense, led by Aiofe Nerz, Mabel Acuna-Casey and Anna Sacus, did fine job in keeping the Rams at bay for most of the game.
Stock had a hand in Randolph's first goal, which came off the stick of Drake, a midfielder, with 7:49 remaining in the second quarter. The Rams had three corners in a span of 3:40 before Drake, on the right post, connected on the next one.
"We just couldn't score at first," Adickes said. "We love the left post but we need to work the right one sometimes. When we finally did, we got it in."
On defense, Randolph (14-2) relied on Katie Lachanski, Jordan Saybe and Ava Sawyer.
Adickes is elated about appearing in the final. It will be her first as a coach or a player. Adickes played her high school field hockey at West Morris before competing at William Paterson.
"It's so exciting," she said. "I'm looking forward to it."
Stock said that Randolph "is a strong team" and "will play our game."
***PHOTO GALLERY BELOW***
Last modified onSunday, 17 October 2021 10:55