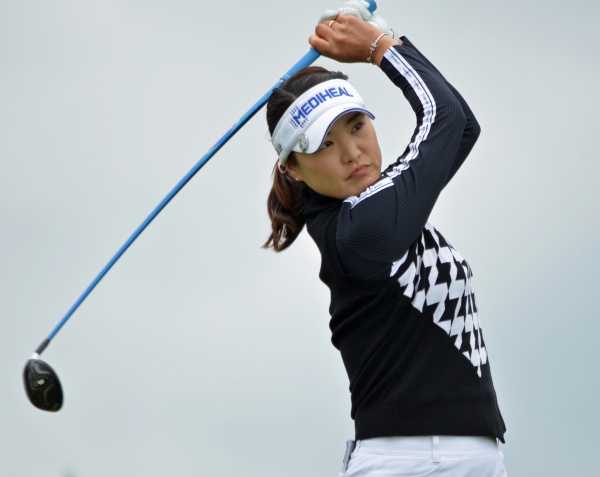 WEST CALDWELL _ Elizabeth Szokol drove the ball with exceptional accuracy in the third round of the Cognizant Founders Cup, hitting fairway after fairway.

Szokol's accuracy off the tee, along with on-target putting, vaulted her from a 22nd-place tie with eight other players into second place, right behind leader Jin Young Ko, who needs one more round in the 60s to join one of golf's elite in the record books.

It was a sensational showing for Szokol, a native of Chicago, as she turned in the day's low score, a 65 on the par-71 yard course at Mountain Ridge Country Club. And Ko's round, in which she carded a 69, was equally impressive.

"I hit a lot of fairways and that definitely helped," Szokol said. "I had a lot of good chances for birdie and got a few long putts to fall so it was definitely a good day. It got pretty windy out there I was happy to stay patient and have some putts fall."

By staying out of trouble off the tee, the 27-year-old Szokol raced up the leaderboard. Only one other time this year did she find herself in contention on the final day of a tourney. That was at the Marathon LPGA Classic in July when she finished second. Szokol was seventh at the Pure Silk Championship in May. She missed the cut in nine tournaments, including last weekend's ShopRite Classic, in 2021.

"I played in the final group at Marathon, which was awesome, so I think kind of the same thing," Szokol said. "Stay patient and see how many putts will fall. Same game plan. Just hit fairways off the tee. I feel like if I do that, I'll have a pretty good chance."

Szokol birdied three of the four par 3s and had seven birdies overall. She concluded her round with a birdie on the 18th hole, a 493-yard par 5.

Ko holds a four-stroke lead over Szokol and three other golfers - Yuka Saso, So Yeon Ryu and Lindsey Weaver. Nelly Korda and Lexi Thompson are among a group of five players at 7-under.

With another round in the 60s, Ko will be side by side with Sorenstam, who reeled off 14 straight rounds that were less than 70 in 2005. How'd she do it? With steady golf and four birdies.

She said the course was very different from the first two days and noted that it was much more windy and chilly. Ko used a 7 or 6-iron and a hybrid club often to contend with the conditions.

After completing her four holes, Ko napped then went out for her 12:57 tee time.

"I took a nap after four holes in the morning and so I tried to feel fresh before the tee off in the afternoon," she said. "When I play on the course, I can focus well. Like I know how do I play golf and how do I putt. It's fine."

Nelly and Jessica Korda were in the same group and seemed to be having an abundance of fun. Jessica said that she and Nelly sometimes forget they're playing serious professional golf.

"So I have to honestly remind myself that we're at a tournament," said Jessica, whose third straight 69 put her in a tie for 11th. "Sometimes, we just joke around a bit too much. But it's nice. I mean, I love being paired with somebody that I like playing with. It makes it more enjoyable on tough days. I think that would be something that I always look forward to."

New Jersey native Marina Alex was hurt by three bogeys and shot a 73. She ended the third round tied for 60th. She had a birdie on No. 15, a par 5.