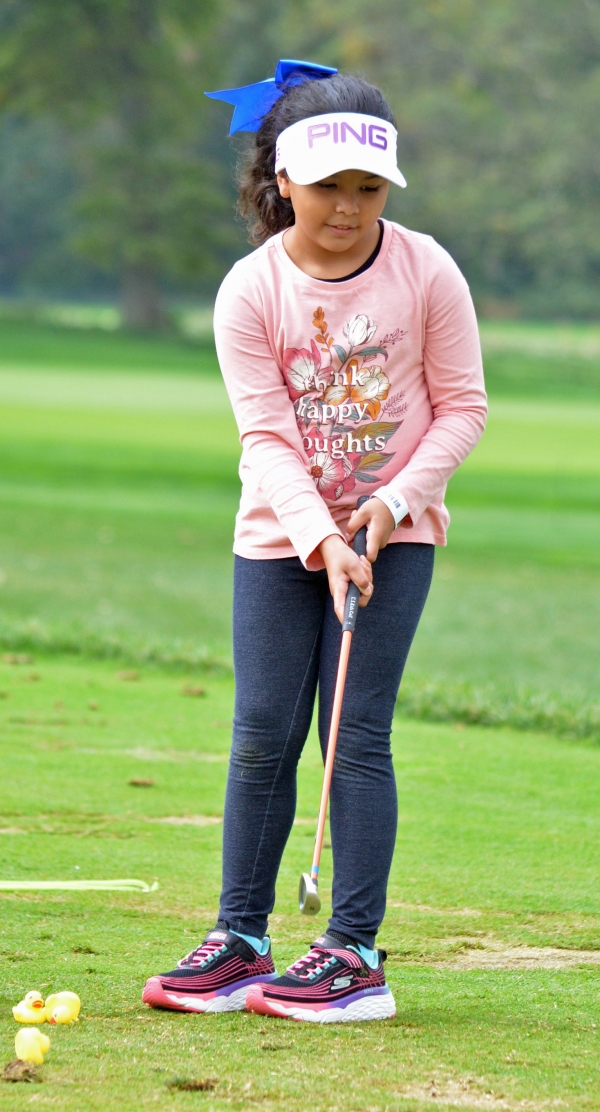 Photos by Maryann Harlow Young golfers, as well as a few older ones, enjoyed numerous activities on Junior Golf Day at the Cognizant Founders Cup on Saturday, Oct. 9.
Rate this item
(7 votes)
Tweet

WEST CALDWELL _ Johanny Bosch's daughter, Sara, and stepdaughter, Emily, were carefree as they spent time pitching rubber ducks and other brightly colored animals onto the tic-tac-toe board in the fan zone at the Cognizant Founders Cup.

The girls, whose only previous exposure to golf was by playing the mini version, seemed deep in concentration as they attempted to hit their marks. Of course, they were having fun, too, and made sure they visited every station at Camp PING.

"I was aiming and I won," said 9-year-old Emily, a fourth grader, who was complemented by volunteer Rinchen Sahni for her efforts. "I liked playing golf. I think I want to learn more about it."

Seven-year-old Sara preferred arts and crafts but was fascinated with the golf carts and expressed a desire to drive one someday. The second grader enjoyed taking a turn on the range, where the objective was to pitch the ball to a pink inflated hippo.

The fan zone, not just for children, was buzzing on Saturday, Oct. 9, which was junior golf day at the LPGA event held at Mountain Ridge Country Club. Young and old received lessons from pros and took part in the Par Tee in Pink.

For Bosch, seeing the children happy was the ultimate reward. She said she and the girls were invited through the Center for Hope and Safety, an organization based in Rochelle Park which was founded in 1976 and is dedicated to assisting victims and survivors of domestic violence and their children.

"It was an unfortunate situation," Bosch said. "They needed this. Although they've never played golf, they're interested. They like sports."

"I've only been playing a little while ago but I like it," said Yun, of Plainview, N.Y. "I'm going to see all of the golfers. Maybe I can be as good as them. I want to hit the ball as far as I can."

Shortly after spending time in the fan zone, Yun and her father were off to watch Lexi Thompson.

Sahni, a freshman at Stony Brook University and the former captain of the golf team at J.P. Stevens High School, has volunteered at LPGA, PGA, USGA, AJGA and First Tee events for seven years. She is an "E" Leader, which means she help teach the five principles of girls golf: empower, engage, exercise, enrich, energize.

"Golf has been a big part of my life so working with the younger kids makes me happy," Sahni said. "I love the game."

In addition to the activities, there was a Q & A with an LPGA player and a Hall of Fame Skills Challenge that featured Nancy Lopez and Chicago Cubs first baseman Frank Schwindel.

Adults, like Joann Mattei of South Philadelphia, had the opportunity to receive golf tips at the lesson zone. Mattei used to play golf in her 20s but hadn't played in decades. She was on the driving range, learning from an instructor named Min.

"My sister, my boyfriend and my father all play," Mattei said. "They'd like me to come out with them. This was my chance to try it again. I found out what I'm doing wrong with my swing and what I've forgotten over the years, like shifting weight to my other foot."

Swinging a club again, Mattei said, "made my day."

"I enjoy golf," Mattei said. "Learning is exciting. I love watching it. I love the beauty of the course. This topped it off."