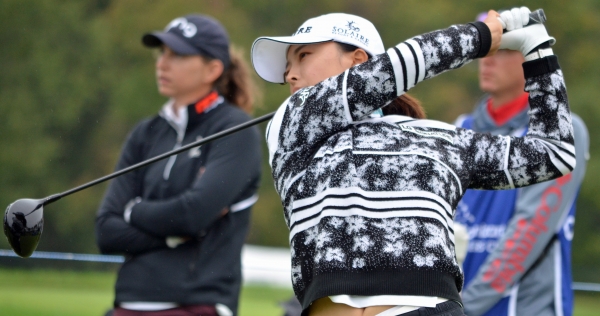 WEST CALDWELL _ The celebratory champagne rained down on Jin Young Ko shortly after her victory at the Cognizant Founders Cup.

Ko, of course, didn't mind being sprayed with the sparkling white wine. After all, she was under pressure for the last four days as she sought to string together 14 consecutive rounds under 70 and pull even with Annika Sorenstam and countrywoman So Yeon Ryu as well as defend a title she claimed two years ago.

The weather - in the mid 60s, with rain coming down harder after 1 p.m. - certainly was not conducive for golf. Still, Ko persevered.

"I needed to just (be) bogey-free and lots of birdies so I didn't look at the scoreboard the whole way, whole day, and I just check the scoreboard on the 18th green," she said. "My caddie told me 'Did you notice?' No. Yeah, I made it, and I'm so happy right now. Finally, I can go back to Korea for tomorrow."

Ko, who won her 10th tournament, waited more than two years for the chance to repeat. The Founders Cup, previously held in Phoenix at the Wildfire Golf Club in March of 2019, was not contested last year because of the pandemic.

"I got a lot of pressure but I tried to be calm and like patient and just comfortable on the course," Ko said. "And then I love this course. This course is like in Canada, like two years ago. I won the tournament bogey-free round and like amazing play. I love this course and fairways and greens are really clearing perfectly. I'm so happy."

Putting, Ko felt, was the key to her success in this tourney. Accurate off the tee and with her approach shots, she only needed 27 putts to capture the championship. She began using a new putter four weeks ago in Portland. Since then, Ko, whose top finish earned her $450,000, has attained two wins and two top-10 finishes with the Titleist Phantom X 5.5.

"I think I will love this putter," she said, with a smile.

Germany's Caroline Masson, tied for sixth entering the final round, was second and had a 64, which was her best round this year. Masson registered seven birdies.

"I can't tell you how big this is," Masson said of being runner-up. "It's been a little bit rough this summer. Honestly, mentally, it was a really, really tough stretch, probably the toughest in my career. So to come back out and have a good week last week and feel like I'm getting really close, you know, I know I'm pretty far away from winning this week scorewise, but it was pretty close. Pretty amazing."

The weather, which worsened as the day wore on, did not bother Masson. She's actually used to it.

"You would think I feel right at home being from Germany," she said. "We have a lot of this at home. I don't know. I just had a really good mental approach today. We know it's going to be tough, going to be raining probably. Just take it shot by shot. I was really, really calm out there. Didn't get ahead of myself."

Elizabeth Szokol was 11-under and took third while Jeongeun Lee6 and Yuka Saso shared fourth place.

"My putting was really solid all week," Szokol said. "I think I only had one or two three putts so that was good, especially on these greens here. I feel like I made a lot of good putts so I'm excited about that for sure."