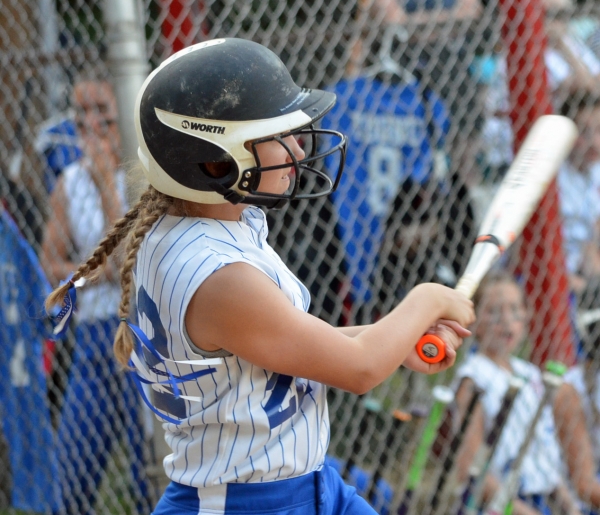 Photos by Sandy Seegers Pequannock sent 15 batters to the plate in the first inning and took a 9-0 lead against Somerset Hills.
Rate this item
(0 votes)
Tweet

POMPTON LAKES _ Heavy rains on Thursday, July 9 caused Pequannock and Somerset Hills to pack up their equipment and go home after just a half inning of play.

A day later, the two teams got the Little League Section 1 losers' bracket game in, with Pequannock coming out on top, 12-0, in four innings behind Emily Deitch's one-hitter.

The win puts Pequannock right back where its wants to be - in the winners' bracket opposite Par-Troy East. The showdown between the two teams is slated for Saturday, July 11 at Joe Grill Field at 3 p.m.

If Par-Troy East comes out on top, it is the section champion and moves on to the state tournament. A Pequannock victory forces another matchup between the two highly talented teams on Sunday at 1 p.m. at the same site.

"We're pumped for it," Pequannock coach Ed Shalongo said. "We need a little revenge on them for the other night."

After a scoreless three innings, PTE scored all of its runs in the fourth and fifth innings and blanked Pequannock, 5-0. Brielle Toone will start again on Saturday. PTE likely will start Tori Freire.

"I think it'll be very close," Shalongo said. "It'll come down to who makes the first mistake in the game. It will be another great pitchers' duel."

In order to get ready for Freire and PTE, Pequannock, which was the runnerup to Robbinsville in the state tournament last summer, will take lots of swings against the pitching machine prior to the game. Pequannock's objective is simple - force another game.

Playing Somerset Hills was a formality. Pequannock, which had a nine-run first inning, was focused and determined to try and repeat as section champion.

Deitch (5 Ks, 1 BB) not only allowed one hit, a single by Riley DeMaray in the fourth inning, she also helped herself by knocking in two runs with a base hit to right field in the first inning. Toone and Alexa Shalongo also had run-producing hits during Pequannock's fast start.

"There was a lot of energy here after (being rained out) last night," Ed Shalongo said. "I expect the same in the next game."

Deitch said she "was excited" about winning last night and getting another chance to play PTE. Because Toone will be pitching, Deitch will be at third base.

View the embedded image gallery online at:
http://soar-nj.com/sports/little-league/item/1115-peq-ll#sigProId66ba9582d1
More in this category: « MN's Champi delivers in clutch Braga redeems herself with a double »