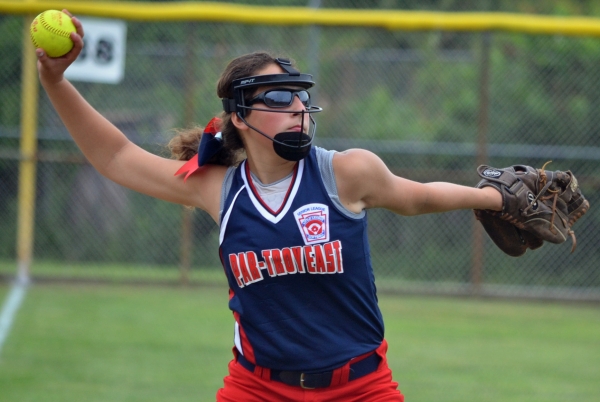 CLIFTON _ There are times when hunches pay big dividends.

Like the one that prompted Par-Troy East manager Rich Leitner, after consulting with his coaches, to make Lauren Vuolo the starting designated hitter for the team's game against Elmora in the Senior Little League State Tournament on Friday, July 17.

Vuolo had been hitting line drive after line drive during practices so Leitner felt she deserved the opportunity.

The hunch was right on as Vuolo stroked not one, but two, critical base hits and knocked in four runs as PTE clinched the state title with a 16-4 win over Elmora.

"Lauren is one of our younger players," Leitner said. "She did a great job. Lauren had been hitting the ball hard but right at someone."

Prior to the win, Vuolo, who soon will enter ninth grade at Parsippany High School, had one hit in six at-bats in the district, section and state tournaments. She struck out the first time she got up but came through in clutch spots.

"I was excited when I was told I was starting," Vuolo said. "I was a little nervous then I calmed down. I wasn't happy when I struck out but I realized it wasn't that scary and I focused more."

The Eastern Regional in Worcester, Ma. is the next stop for PTE. On Sunday, July 26, PTE will open play in the regions against Maryland at 10 a.m. On Monday, July 27, it will meet Delaware at 12:30 p.m.

PTE came into the third inning trailing, 2-1. It put across six runs, two on Vuolo's base hit to right field, and went ahead, 7-2. Meg Leitner (4 for 6, RBI) singled and Elizabeth Quigley walked before Alivia Mercuro reached on an error to tie the score, 2-2. Caitlin Brennan singled in the go-ahead run, making it 3-2.

An error was made on a ball hit by Claudia Bennett and PTE went up, 4-2. Vuolo, batting seventh, then got a base hit. Julz Del Viscio closed out the big inning with an RBI single.

Vuolo credits two of her travel team coaches, Nick Sisco and Karl Monaco of the Montville Lady Mustangs, with making her into a strong hitter. Sisco, she said, helped instill confidence in her and taught her not to lean so much because she used to pop the ball up. Monaco often works with her off the tee.

It was a tremendous state finale for PTE's attack, which hammered out 21 hits. Winning pitcher Caitlin Brennan aided her own cause by going 4 for 5, including a home run, and three RBIs. Quigley, Nicole Ruggiero and Savannah Cerrato added two hits apiece. Quigley scored twice and Ruggiero drove in a run.

Brennan, who allowed five hits and struck out 10, was the beneficiary of the strong offensive showing. Rich Leitner noted that Elmora was a very good team and that it had 10-runned Middletown, 12-2, and Monroe, 13-2.

PTE didn't sweat when it had to come from behind twice. Elmora was in front, 1-0, after its initial at-bat. Brennan pulled PTE even, 1-1, slugging a solo home run to left field in the second inning.

"This state championship certainly made up for last year," Rich Leitner said. "The girls fell short and wanted to go beyond. This team has been getting big leads early. They don't want teams to be able to come back. Tonight, we had to fight a bit but pulled through."

In July of 2014, PTE appeared to be on the verge of securing the state crown when it held a 9-3 advantage over Manasquan/Brielle/Wall after four innings. PTE, however, made an abundance of errors and was defeated, 12-10.

"This is very, very exciting," Vuolo said. "To get to go to regionals is great."