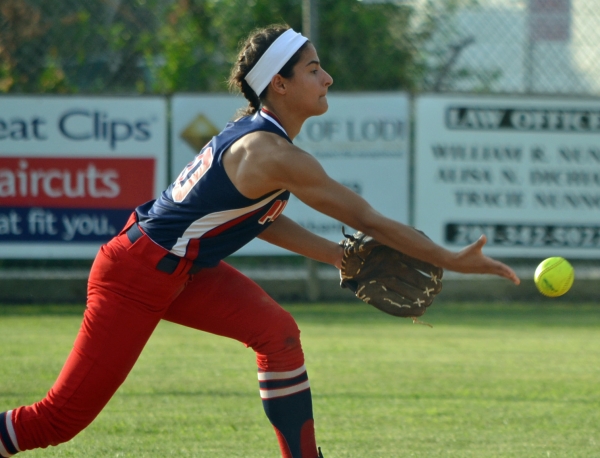 Photos by Sandy Seegers Shortstop Luisa Barone, pictured above, made a diving catch of a line drive to end PTE's game against Maryland in a pool play action at the Senior Little League Eastern Regional. The photo below features Julz Del Viscio, who knocked in the game-winning run with a double.
Rate this item
(0 votes)
Tweet

Del Viscio doesn't mind being last. Actually, many times she winds up being first, jumpstarting the attack before Luisa Barone, the leadoff hitter, takes her turn.

On Sunday, July 26, Del Viscio came up with her "biggest hit in a long time," doubling in what proved to be the game-winning run in the bottom of the sixth inning when PTE trimmed Perryville, Md. 3-2 in pool play at the Senior Little League East Regional Tournament.

"It was pretty cool," said Del Viscio, who sent the ball over the left fielder's head with two outs and the count full. "It was in our heads that they got a home run so it was nice to get the lead. Our coach tells me the ninth batter should hit line drives in the gap to get the next hitter up. Luisa gets the whole lineup going."

PTE and its formidable lineup shut out Stanton Newport of Delaware, 10-0, in five innings on Monday, July 27 in its second Mid-Atlantic Pool B matchup.

The home run Del Viscio referred to was hit by Carly White in the top of the sixth inning, robbing PTE of the comfortable 2-0 lead it held for five innings. White's homer was a two-run shot, evening up the score and putting PTE on edge.

Claudia Bennett, who doubled and moved to second on Nicole Ruggiero's sacrifice, scored PTE's third run in the lower half of the sixth.

"It was a very exciting first game," PTE manager Rich Leitner said. "I would've preferred it was not so exciting but we came out on top. Julz is what you want in a No. 9 hitter. She gets on and we get going again."

Del Viscio has nine hits in 23 at-bats during the all-star season. She reached once on an error. She has scored nine times.

Watching White round the bases after her home run did not perturb PTE, which has rarely faced a late-game deficit. It simply went back to work. There was pressure on Del Viscio when the count reached 3-2 yet she came through.

"We couldn't be fazed by the home run," said Del Viscio, who will be a sophomore at Parsippany High School. "We played our game and got the run we needed."

Maryland had hearts pounding on both sides when it got a runner to third with two outs in the top of the seventh. Barone, PTE's shortstop, ended the game with an excellent diving catch of a line drive.

PTE got on the scoreboard in the first inning. Barone singled, advanced on an error and crossed the plate on another miscue.

In the third inning, PTE increased its advantage to 2-0. Barone doubled, went to third on a groundout and scored on Elizabeth Quigley's double.

Caitlin Brennan did her part, pitching a complete-game three-hitter and striking out eight. In the last two games, Brennan has allowed only eight hits and struck out 18.

"We were all nervous going into the first game," Del Viscio said. "We calmed down. We just had to see how everything went."

Versus Delaware, PTE didn't have to sweat it out. After three innings, they were up, 8-0.

Barone (3 for 4, 2 runs scored) was at the core of the attack once again. The game's first batter, Barone doubled and scored when Meg Leitner slugged a two-run homer. Claudia Bennett lashed a two-run single to knock in Quigley, who was hit by a pitch, and Alivia Mercuro, who had a base hit.

Ruggiero (two-run single) and Carly Homler (sacrifice fly) came up big in the third inning when PTE widened its advantage to 7-0. Leitner picked up her third RBI with a sacrifice fly. Barone, who tripled, came in on the sac fly. Barone finished a home run short of hitting for the cycle.

The ninth and 10th runs scored in the fifth inning when a ball hit to the outfield by Del Viscio was misplayed.

"The girls just took care of business today," said Rich Leitner after the second game. "They came in and did an awesome job."

View the embedded image gallery online at:
http://soar-nj.com/sports/little-league/item/1121-pte-again#sigProId1536dc1717
More in this category: « PTE manager goes with hunch PTE Senior LL must bounce back »