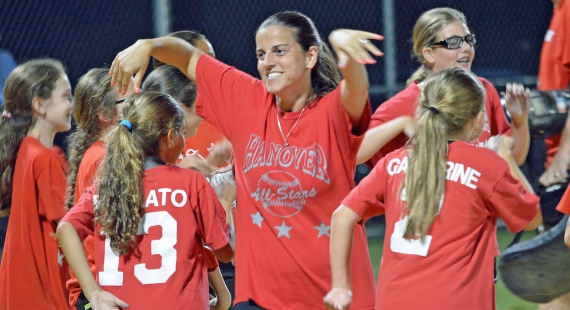 Photos by Sandy Seegers Coach Maria Mess, above, makes her way through the dancing Hanover 9/10 Little League Softball Team after their scrimmage on Tuesday, July 28. Below, the players enjoy pizza after practice with manager Kristin Yacat the night before departing for the state tournament.
Rate this item
(1 Vote)
Tweet

HANOVER _ Not long after the Hanover Little League 9/10 All-Stars completed their scrimmage against the 12Us, they formed a circle and the fun began.

"Watch me Kelly, Kelly," the players yelled, beginning a dance, their version of The Whip.

They went through the song-and-dance routine that began earlier this July after a game versus Warren at the Denville Tournament, laughing and joking. Each 9/10U player was mentioned then the 12Us.

"The song gets us pumped up," said outfielder Gabby Brulato.

"It gets us moving," Giovanna Mess added.

The Hanover 9/10s certainly have been on the move during the summer of 2015. They are in the midst of a journey that has garnered them district and section 1 titles. Their next stop? The state tournament, which commences on Thursday, July 30 in Northfield.

"It's so cool to go back," said Mess, the shortstop and one of four Hanover players fortunate enough to get a second chance at a state championship. "It's exciting. We're having lots of fun."

Hanover, which defeated Morristown National in the district tourney and Pequannock to take the section, will meet Wallington in its first game at 5 p.m. Defending state and East Regional champion Robbinsville and Swedesboro-Woolwich face off at 7:15 p.m.

"The girls are having a great time," manager Kristin Yacat said. "We're looking forward to the state tournament. We're going to take advantage of what we do well."

In this instance, that would be defense. Over and over, Hanover, the runner-up to Robbinsville last year, has made big plays in the field.

"We work really hard at the fundamentals," Yacat said. "Many of the plays have been amazing. There have been many great catches and stops."

Yacat's daughter, Brynn, has impressed her teammates with her efforts at third base. The younger Yacat has taken her lumps at the position, knocking down nearly everything that comes her way. She's been hit in the shins, ankles and knees yet manages to make the plays.

"I'd say Brynn's our best fielder," Mess said. "She gets hit and stays in the game."

The squad's offense has had its struggles. Still, it has been effective enough to earn Hanover sweeps in the best 2-of-3 series against Morristown National and Pequannock.

"Our motto is, if we put the ball in play, we can win the game," Kristin Yacat said. "If we get people on, we have good team speed."

Mess, capable of bunting and hitting away, sits atop the batting order. She get her teammates going. Yacat said "The girls feed off her." Brooke Gasparine, the second baseman, bats in the No. 2 spot and has some power. Brynn Yacat is third in the lineup and possesses a good eye, drawing frequent walks.

First baseman Bella Pecora and Alyssa Pavone, the pitcher, hold down the No. 4 and 5 slots. Right fielder Melina Ayash follows them. All three can hit the ball for power.

Evelyn Dente, the center fielder, is one of Hanover's top clutch hitters. Dente was a slapper but is now swinging away. She, too, has some pop in her bat. Mikayla Swan, a fine defensive catcher, is eighth. Mandy Myron, known for her "D" in left field, completes the order.

Colleen O'Grady is Hanover's most versatile player, pinch running and seeing action as DH and outfielder.

"I get the opportunity to do a lot of different things," O'Grady said. "I like that. I can run, hit and field."

Colleen's sister, Kelly, comes off the bench to play outfield. Brulato is called upon to pinch hit and has been reliable in that role. Madeleine Oswald is another of Hanover's talented reserves.

Pavone, very accurate, pitched all of the district and section games. She rarely walks a batter.

"We're ready," said Mess, whose mother, Maria, is a coach along with Craig Gasparine. "We all care about each other. We get along. Everyone brings something to the team."

The double-elimination tournament continues on Friday, Saturday and Sunday (and Monday, Aug. 3, if necessary) with all games being played in Northfield.