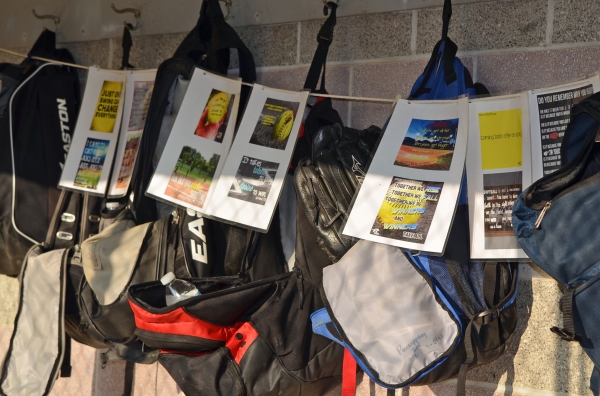 WORCESTER, Ma. _ Kara Fluet, a pitcher capable of consistently throwing inside, and her team, Jesse Burkett of Worcester, Ma., defeated Par-Troy East 10-2 in a semifinal at the Senior Little League East Regional Tournament.

Fluet, a righty, didn't strike an abundance of batters. PTE's batters made contact but not with much success.

"The umpire had an inside strike zone and their pitcher kept hitting it," said PTE manager Rich Leitner. "Even when we put balls in play, they were not well struck. Everything was in on the hands."

The setback in the game played on Thursday, July 30, ousted PTE from the regional. PTE gained its spot in among the final four as one of the top two teams in the Mid-Atlantic Pool.

"We accomplished what we set out to do," Leitner said. "We wanted to win the state title and play well in the region. The girls were very upset last summer when it was all over. They weren't as disappointed this time. There was no long period of sadness.

"They'll play together again in high school. It's the end of the season, not the end of an era. They're a great group of girls and had a great summer."

Worcester had 16 hits and managed four walks against PTE. In the fourth inning, PTE got all four of its hits and both runs. Meg Leitner had an infield single. Elizabeth Quigley singled to left field. Caitlin Brennan then singled in a run. An RBI base hit by Claudia Bennett plated the second run.

Quigley, Leitner and Bennett were the other PTE players to boast batting averages above .400. Quigley, the catcher, hit .500 and led PTE with 19 RBIs. Leitner, the center fielder, batted .465 with 13 RBIs and 14 runs scored. Bennett, the left fielder, was at .421.

Caitlin Brennan toiled in the pitching circle, posting a 10-2 record and striking out 109 in 73 innings. Brennan had a 2.57 ERA.

One day after the Par-Troy East Senior Little League Team had a major collective mental lapse at the Senior Little League East Regional Tournament, forgetting to have fun and be loose, it roared back with an 8-2 victory over District 18 of Rockland, N.Y. on Wednesday, July 29.

The triumph was critical, not only keeping PTE alive but propelling it into the regional semifinals.

"We just looked at each other and said 'This is our game,'" said third baseman Alivia Mercuro, who had two hits, including a double, and three RBIs. "We needed to go back to what we had been doing. We were too tense.

"It's amazing to get to the semifinals. We've been dreaming of it since we were 10 years old. We're two wins away from the World Series and getting those wonderful green uniforms (which are issued to the East representative)."

PTE went 3-1 in the Mid-Atlantic Pool. Its only loss was to Bristol Boro, Pa. by a score of 11-3 on Tuesday, July 28. PTE's demeanor that day was uncharacteristic. The players were tight and lacked focus.

"This was a great comeback," PTE manager Rich Leitner said. "There was a very different attitude today. You could tell the girls were comfortable and having fun."

Catcher Elizabeth Quigley, who threw out three runners attempting to steal, was glad PTE returned to its typical relaxed and laid-back state.

"We took the game against Pennsylvania too seriously," Quigley said. "You can't stress out. You just need to play and to have fun."

PTE will vie with the host team, Jesse Burkett of Worcester, Ma., on Thursday, July 30 at 9 a.m. in the semifinals. Worcester posted a 4-0 record in the New England Pool. The winners of the semifinals play at 1 p.m.

The game against New York was close, 3-2, before PTE extended its lead with a five-run sixth inning. Julz Del Viscio's squeeze with the bases loaded put PTE in front, 4-2. Singles by Caitlin Brennan, Claudia Bennett and Savannah Cerrato preceded the bunt. With two outs, Meg Leitner singled to center field to fill the bases again. Quigley plated two runs with a base hit to center field. Mercuro singled in the final run.

Mercuro was immensely relieved that she was able to contribute a pair of clutch hits.

"I haven't been on my hitting game for the last three games," Mercuro said. "I finally broke through. I'm glad that I hit in such an important game."

Quigley's strong, accurate arm was on display. She cut down runners to end the second and third innings.

"I've thrown out maybe two in a game before," she said. "We needed whatever outs we could get today."

Another player who played a large role in the victory was pitcher Caitlin Brennan, who pitched a complete-game five-hitter, striking out 12 and walking four. Brennan gave up only three hits over the first five innings.

In the bottom of the first inning, PTE received bunt singles from Barone and Leitner. New York threw to second trying to catch a runner attempting to steal and Barone went home on the throw.

The three-run third inning was highlighted by Mercuro's two-run double to center field.

At dinner following the game, the PTE players discussed the fact that they need only two more wins to gain entry to the World Series, which will be held at the Lower Sussex Little League Complex in Roxana, Del.

"Just think about it," Mercuro said. "We need only two more."

Quigley seemed a bit surprised that PTE is in the semifinals.

"We were just shooting to get past the states," she said. "I didn't really think we'd get this far. It's a new experience. It's very exciting."