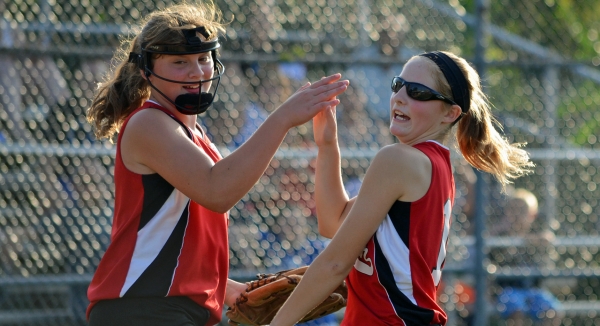 LODI _ Prior to its losers' bracket game at the Little League State Tournament, Hanover formed a circle next to its dugout to prepare for its game against Wallington.

Manager Maria Mess got the group therapy session started then called upon each one of the players to speak. Some of the girls simply offered encouragement while other players were specific, including one who said to watch where the ball was being thrown if it got past the outfielders. Several reminded their teammates to keep believing.

All of the words uttered definitely made a difference as Hanover, buoyed by Julia Swan's one-hitter and Megan Gilbert's three hits, dominated Wallington 9-0 on Friday, July 15 in Lodi.

"They came to play today right from the start," Mess said. "They talked each other up. At the pow-wow, the girls decided what changes were necessary and made them."

Gilbert, 3 for 3 with a walk, felt that the meeting was beneficial.

"Mrs. Mess wanted us to communicate," Gilbert said. "We talked about what didn't go well when we played Robbinsville. If someone got down, we should pick them up. We had to get the ball in fast from the outfield."

Swan, a bit off in the opener versus Robinsville, returned to form, striking out 12 batters. The right-handed Swan struck out the side in order in the first and third innings. She fanned nine of the first 11 batters she faced. Catcher Leslie Arce had Wallington's lone hit, a single to open the fifth inning.

Her teammates, limited to four hits by Robbinsville ace Brynn Hopkins the night before, improved their offense, rapping out eight hits. This time, Hanover got on the scoreboard quickly, scoring three runs in the first inning aided by four walks and an RBI single by Giovanna Mess.

"Julia disagreed with many of the calls the other night," Mess said. "Her mentality changed. She zoned in. Nothing was going to mess with her."

Not even the tumble Swan took after racing to first on an infield single in the third inning... She hurt her left knee when she fell and was replaced by a pinch runner. Still, Swan stayed in the game and returned to the circle.

All game, Hanover, which will clash with Swedesboro-Woolwich on Saturday, July 16 at 6 p.m. in the double-elimination tournament, capitalized in two-out situations.

"We brought ourselves up before the game," Hanover shortstop Brynn Yacat said. "We had a lot of confidence."

After the two-run second inning, which featured Gilbert's RBI single and Yacat reaching on a miscue, Hanover held a 5-0 advantage. In the fourth inning, Katie Brunner and Victoria Sheridan slugged a triple and double, respectively, to produce two more runs. The eighth run scored on an error. Yacat knocked in the ninth run in the fifth inning.

"I felt good at the plate," Gilbert said. "I kept telling myself 'I've got this. I can do this.'"

By ousting Wallington, Hanover moved a step closer to a rematch with Robbinsville.

"I think we're ready," Yacat said. "We need to focus. We've got to try our hardest and play our hearts out."