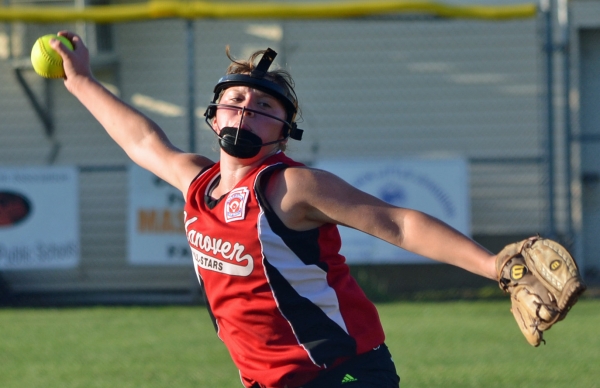 Photos by Sandy Seegers Julia Swan was a workhorse in the circle for the Hanover 12s.
Rate this item
(5 votes)
Tweet

LODI _ Twice in four days, Hanover was shut out by Robbinsville.

The second loss, on Sunday, July 17, stung the most because Robbinsville secured the Little League State Tournament title with a 7-0 win.

Still, the two games were markedly different as Hanover entered the final with a different mindset and a more potent offense. Robbinsville actually felt fortunate to come away with a second shutout.

"We knew it would be really, really tough to have to play them again," Hanover coach Maria Mess said. "I don't think the score, especially in the second game, justified how we played.

"The Robbinsville coaches were impressed and talked about how well we hit their pitcher. We just couldn't string together hits to make runs. Our defense was great."

Held to four hits by Brynn Hopkins in the tournament opener on Thursday, Hanover came out swinging and rapped out five hits, two in the first inning. Giovanna Mess reached Hopkins for a triple to right field in the second inning but was left stranded.

"We were a new team," Mess said. "We had the runners moving. We just couldn't get anyone across the plate. Our girls attacked Hopkins. They played hard."

Hanover ace Julie Swan put in yet another solid effort despite being hit in the pitching hand by a batted ball in the lower half of the first inning. Swan's pinkie on her right hand swelled but she kept throwing. Mess offered to move her to another position. Swan, however, wanted to stay in the pitcher's circle.

"Julia pushed through," Mess said. "She wanted to stay in and pitch. She did what she needed to do."

So did first baseman Victoria Sheridan, who remained in the game with a bloody nose.

Robbinsville used four hits to score four runs in the first inning on Sunday. Hopkins had an RBI base hit in the inning and Shea Krebs doubled in two runs.

Alexa Klepper had a two-run single in the second inning. Robbinsville's seventh run scored on Hailey Pacifico's groundout. Over the last three innings, Hanover clamped down and did not allow a run. Swan retired the last seven Robbinsville batters in order.

Hanover, which claimed district and section banners, left two runners on in the first inning. Mess was left on third after tripling with one out in the second inning. Katie Brunner got her second hit with one out in the top of the third but did not advance. Brynn Yacat singled in the fourth and the younger Mess was hit by a pitch, putting two runners on. A strikeout and groundout ended that threat.

Hopkins closed out the game by breezing through the last eight Hanover batters. Megan Gilbert was the only player to hit to the outfield in that stretch, flying out to right field.

After dropping into the losers' bracket, Hanover battled back with wins over Wallington and Swedeboro-Woolwich.

"It was a fantastic way to end the season because everyone contributed," Mess said. "Hanover didn't just walk away. It rose to whatever was thrown at it. There's no need for the girls to hang their heads. You could see the spark in the last game. We didn't just hand over the win."