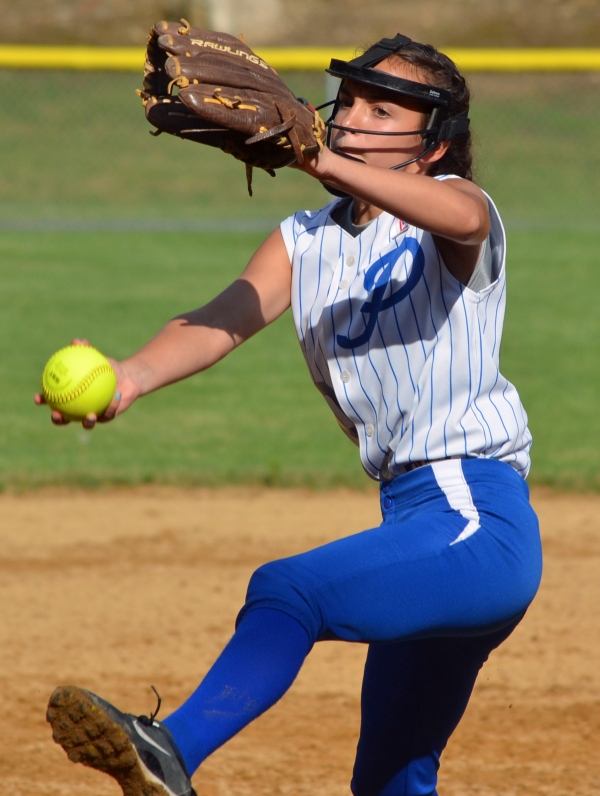 Photos by Sandy Seegers Nikki Klimek struck out six batters over six innings to help Pequannock to a 2-1 victory over Hanover in the Section 1 final.
Rate this item
(5 votes)
Tweet

PARSIPPANY _ Each summer, Pequannock sets its sights on the Little League State Tournament and often breezes through district and section play.

A 2-1 victory over Hanover in the Section 1 final on Friday, July 7 vaulted Pequannock back to its desired destination for the first time since 2014.

"Our girls are definitely ready to go," Pequannock manager John Banya said. "They're confident. They're excited to get the game in and get going."

Nikki Klimek, who struck out six over six innings in the title game against Hanover, returns to the circle. The 11-year-old right-hander allowed just one run in the district tournament. Klimek has received exceptional backing. Pequannock amassed 37 runs in three district games.

Banya had nothing but praise for the always reliable and effective Klimek, whose older sister, Carly, was a three-sport standout in high school. The younger Klimek, no surprise, works under the tutelage of Pequannock High School coach Maryann Goodwin.

"The pitching has been phenomenal," Banya said. "Nikki has pitched very well. She's young but she's doing great. Nikki is one of our leaders. She keeps the girls in the game."

Offense, obviously, is a strength with hits and runs coming from a variety of sources. In last Friday's sectional final, Banya called on Kailyn Gaffey to pinch hit and she came through with a one-out, two-run single in the fourth inning.

"Kailyn has been an asset off the bench and has come up with some big hits," said Banya. "That was one of them."

The runs were set up by back-to-back singles by Danielle Cannizzaro and Sara Tobin. Brielle Rotter followed with a sacrifice bunt.

Rotter is the catcher while Cannizzaro anchors the infield as shortstop. The third baseman is Tobin. Megan Chorba and Christina Banya play first and second base, respectively. Faith Tucker, McKenzie Minervini and Emily Fricker start in outfield for Pequannock, which last claimed the state crown in 2009. The 2006 squad went all the way to the World Series and was runnerup.

View the embedded image gallery online at:
http://soar-nj.com/sports/little-league/item/1438-softball#sigProIdbca213df9d
More in this category: « Hanover blanked in opener