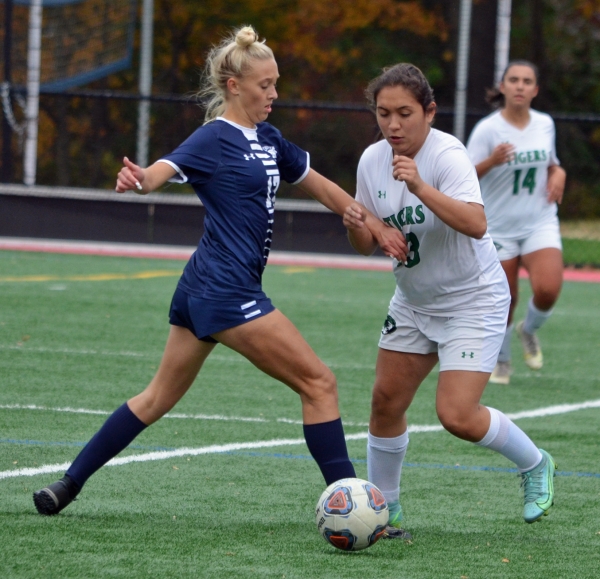 Photos by Sandy Seegers Abby Droner, left, was one of three Chatham players with two goals in a 10-1 state tournament win over South Plainfield.
Rate this item
(6 votes)
Tweet

CHATHAM _ There was no grudge to settle and absolutely no desire to send the score into double digits.

Five days after a devastating setback to Mendham and a 10 days after a euphoric event - claiming the Morris County Tournament title - Chatham opened the state tournament with a 10-1 victory over South Plainfield in a North Jersey Section 2, Group III first-round game on Tuesday, Nov. 2.

The Cougars (11-4-3) went into halftime leading 4-0. At the break, Chatham coach Gary Adair put in some of his subs so they'd get playing time. They took their turns on field seriously, netting six more goals.

"Ten goals are a lot," said junior center back Stella Straka. "It was good to see everyone get some action. Some of the players don't get in very much. There was so much camaraderie. We shared the wealth. Because we were coming off a loss, we wanted to be confident and not nervous.

"We had a game plan going in and have been practicing hard. Some moments today were exactly like in practice."

Adair said the intention wasn't to drive the score up and end with a blowout.

"We usually have 11 players who have been in the big situations before," he said. "We've gone against lower seeds and still struggled. We needed to engage our other players. We need them if someone is out. It's good to have players who can fill in at a moment's notice. We wanted to get the job done early and relax."

Junior Sam Canto is the perfect example. Canto scored the sixth and ninth goals, which were the first two of her career. McKenna Hogan, a freshman, picked up her first varsity assist. Depth is needed if the Cougars are to make a run in the states.

Having players who are a bit rested, too, will help Chatham, which will take on seventh-seeded Mendham for the third time this fall in a sectional quarterfinal on Friday, Nov. 5 at 10 a.m. at Haas Field.

"In our conference, we don't get a break. There's no rest," Adair said. "We've got Randolph, West Morris, Mendham, Morris Knolls, Roxbury. All of them are great teams. We didn't want 10-1. It doesn't do anyone any good. What was good is that many players got to play and it was important to move on."

Kayleigh Coughlin opened the scoring for the Cougars, putting the ball into the net five minutes into the game after receiving a pass from Kate Pickett. It went to 2-0 on Ashley Kiernan's goal at the 20-minute mark. Coughlin then converted again for 3-0 before Paige Droner recorded a goal.

In addition to Canto and Coughlin, Abby Droner recorded a pair of goals. Hogan and sophomores

To get past South Plainfield, Chatham, the 2021 MCT champion, had to start from its defense and work the ball upfield. They had to use set pieces rather than one player because the visitors, Straker heard, are fond of dropping back.

Mendham will be tough, Straka said. The Minutemen tied the Cougars earlier this season.

"It will come down to how we step up and attack weaknesses and defend strengths," Straka said. "We have a lot to prove going into the game. We can do it. I have faith in this team."

Adair feels several elements will be beneficial versus the Minutemen.

"The last time, we were a little impatient," Adair said. "We need to take care of the ball better and find better ways to take advantage. We're familiar with Mendham. We've got to play them properly."

View the embedded image gallery online at:
http://soar-nj.com/sports/soccer/item/1718-chatham-girls-soccer#sigProIdd870cf1a49
More in this category: « Historic season for Hornets