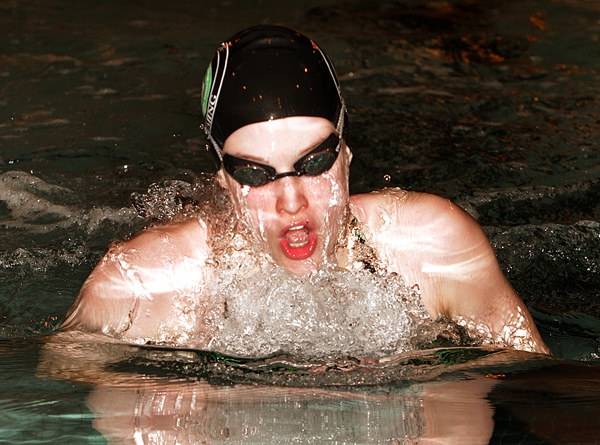 While it seems like a laid-back approach, it actually was the ideal strategy.

The Cougars didn't have a first-place finish until the seventh girls race when sophomore Regan Kology claimed the gold in the 400-meter freestyle.

However, what occurred before and after that - an abundance of places from second through 12th - enabled Chatham to capture its fourth consecutive Morris County Swimming Championship on Saturday, Feb. 4 at Morristown High School.

"We have girls with potential to be in first place for every event," said Cougars sophomore Jessica Gorham, who was tops in backstroke (1:05.55) and served as anchor on the winning 200 and 400-meter freestyle relay teams. "The captains did a good job emphasizing that a third is as good as a second, a fifth is as good as a fourth and a 12th is as good as an 11th. We work for depth."

Gorham praised the captains - Alyssa Raiola, Julia Harrigan, Taryn McLaughlin, Kate Buchser and Jessica Aloia - for being repetitive. She didn't mind hearing what they had to say over and over.

"Every place matters," Gorham said. "Being first is a great accomplishment but it's more important to back up your team."

Chatham, under first-year head coach Karen Gaba, amassed 295 points while second-place Kinnelon had 192. Mountain Lakes was third with 154 and Mendham had 152. Fifth and sixth-place Morris Knolls and St. Elizabeth had 102 and 95 points, respectively.

Kology was the only other Cougars swimmer to take an individual race, repeating as champion in the 400-meter freestyle in 4:27.43.

"I'm happy with my time but that's not what it's about," Kology said. "I did it for the team. I could see and hear everyone cheering for me. That made me go twice as fast. It was an adrenaline rush."

She, too, referred to the talk they had before the championships.

"It comes down to who gets second, third and fourth," Kology said. "We put it out there. Every point is so important."

That's why Rachel Tortorella and Charlotte Morissey, 11th and 12th for Chatham in the 100-meter freestyle, were considered key contributors. So were Jenni Allocco, Evan O'Hara and Raiola, Nos. 7, 9 and 10 in the 400-meter freestyle.

The Cougars came up big in the 200-meter freestyle, picking up 33 points when Kology, McLaughlin and Allocco were third, fourth and fifth. There also was a superb showing in the butterfly as Kara Miller-Radest, McLaughlin and Buchser garnered second, third and fourth for 36 points.

"Everyone stepped up to the plate," Gaba said. "Everyone rose to the occasion. It was a fantastic job. We picked up momentum with the butterfly and 200 free relay. That carried us through to the end."

"There was a collaborative decision made by me and the captains regarding the 200-meter freestyle relay," Gaba said. "We took Gorham out of the medley relay and put her in the 200 free one. Getting records in both was awesome."

Another meet record fell, too, as Maya Scheidl of Mendham turned in a 58.29 in the 100-meter freestyle. Scheidl's performance broke the record previously held by C.J. Pisano of St. Elizabeth (59.82).

"Maya and I are both really fast," Cecere said. "When I'm racing against my teammates, it moves the competition to another level. It's always up in the air as to who'll be first."

"I'm happy," Fisher said. "I was trying to focus on my race and getting fast off the walls. It's meters instead of yards so I worked on my turns. We all came in wanting to have fun. If you're having fun, you swim faster."

Fisher's sophomore teammate, Meghan Thompson, was first in the 50-meter freestyle, just ahead of Chatham's Gorham. Thompson was timed in 27.33. Gorham touched the wall in 27.36.

"Me and my teammates train hard," Thompson said. "It's good to see that what you put in is what you get out. You think you're dying at practice but it's worth it. All I want to do is to do my best."

Gorham was a bit upset at being edged out.

"It was really close," Gorham said. "You can't blink that fast. It was frustrating to lose by so little. I wanted those points for the team."