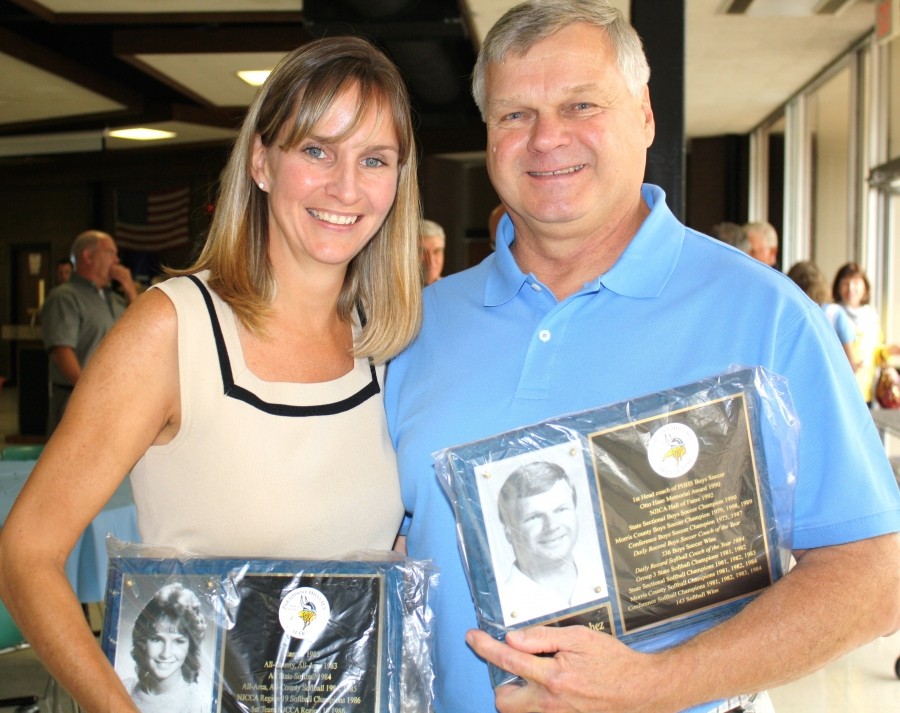 The man Sullivan referred to when she was inducted into the PHHS Hall of Fame on Saturday, Sept. 24 is Jim Delaney. A Parsippany resident who pitched in men's fast-pitch leagues, Delaney began teaching Sullivan when she was in seventh grade.

"I said I had an interest in pitching," Sullivan recalled at the event which feted the 2011 inductees. "It was all free back then."

Sullivan, like JoAnn Ferrieri before her, learned well from Delaney. Her right arm helped the Vikings to the 1984 Morris County Tournament title and made the Vikings a formidable opponent. Parsippany Hills defeated Whippany Park, 4-3, in the MCT final. Sullivan earned MVP honors.

"If not for my teammates, I wouldn't be here today," Sullivan said. "It was a team effort."

Klebez was the Vikings' long-time boys soccer coach as well, racking up 336 victories.

"When I first started coaching, I was told if I surrounded myself with good people, good things would happen," Klebez said.

Angela Rosamilia, Class of 1999, gained entry to the Hall of Fame for her outstanding efforts in track and field.

While in high school, Rosamilia set school records - which still stand - in the shot put, discus and javelin. In her senior year, she was named to the All-America team. She had three first-place finishes in Group III, five first places in state sectional competition and came in first in nine conference championships.

"This is a wonderful honor," Rosamilia said. "I certainly didn't expect it. I'm flattered to be nominated. I just did what I loved."

Entering high school, Rosamilia was infatuated with basketball, making the varsity as a freshman. However, after taking part in spring track as a ninth grader and finding success, she put her attention there.

Several more 2011 inductees were involved in athletics. Chris Singleton (1985) and Joe Orsulak (1980) went on to play professional sports. Upon graduating from Arizona State, Singleton was drafted in the first round by the New England Patriots and played in the NFL for seven years. Orsulak played baseball for five Major League teams and had a career batting average of .273.

Bruce Scherer was the first PHHS basketball player to attain 1,000 points. Scherer (1972) concluded his scholastic career with 1,396 points. He continued his academics and athletics at Rutgers and was a member of the basketball squad that went 31-0 in the regular season and advanced to the NCAA Final Four.

Tom Petrosino (1982) excelled in wrestling, finishing third in the state in his senior year. He was a region and district champion three times and had a career record of 87-8-2.

John Harper, a New York Daily News sports columnist, author/co-author of five books and a regular on several sports talk shows, was captain of the basketball and baseball teams during his senior year at Parsippany Hills. Harper graduated in 1973.

Zeltsman is a world-renowed marimba player, teacher and recording artist. Baldassari has been nominated for Tony and Emmy Awards for his work as a theatrical lighting designer. Martino is an accomplished cameraman in the world of movies and television.

Perlett, an original faculty member, held many positions, most notably head of the English Department and vice principal, durig his tenure. Calabria served on the Board of Education for more than 35 years, was board president and taught for 47 years.