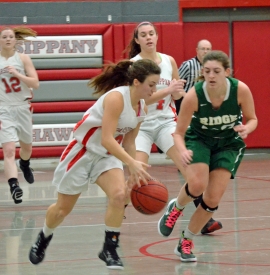 Photos by Maryann Harlow The Red Hawks improved upon their 2014-15 finish.
Rate this item
(0 votes)
Tweet

PARSIPPANY _ Slowly but surely, Parsippany was finding its way.

The Red Hawks had beaten Whippany Park in their opener and edged Madison. Losses to Hanover Park, Kinnelon and Mountain Lakes were by four points or less.

Midway through January, Parsippany was without point guard Salena LeDonne, who sprained her ankle, but managed to put together a four-game winning streak. Circumstances became worse when backup point guard Ragan Kelly was sidelined with a concussion and had to sit out a week.

Still, the Red Hawks, despite struggling on offense, pushed forward, determined to improve on the 2014-15 season when they won three games.

"We hit a very rough spot in the middle of the season," Parsippany coach Joe Kirk said. "Having Salena and Ragan out at the same time really hurt. They're important players for us."

Parsippany finished 9-18 and accomplished its most important objectives - bettering last year's record and making the state tournament for the first time in four seasons.

"We kept our heads up," senior center Nicole Hill said. "We kept going. Sometimes, we were a little off but, when we talked and came together, we all started clicking."

According to sophomore guard Luisa Barone, the Red Hawks often got off to slow starts and were "unable to get out of the ruts."

"Under pressure, we'd sometimes get riled up," Barone said. "We'd make some mistakes. We'd keep shooting and it would work out."

Kirk, in his second season guiding Parsippany, echoed Barone's feelings about the initial eight minutes of games, which often dictated how the remaining three quarters would go.

"When we started slowly, it snowballed," he said. "The girls lost confidence if they missed shots at the beginning. Of course, if they went in, we would get on a roll."

In its North Jersey Section 2, Group II state tournament game against fourth-seeded Rutherford, Parsippany trailed by just three points at halftime. Rutherford took charge in the third period, outscoring the Red Hawks, 19-9, and went on to a 43-26 victory.

There were plenty of positives in the season. Hill, a standout middle hitter for the volleyball squad, averaged 8.1 points and 7.5 rebounds. She was named to the NJAC-Liberty Divison first team. Karli Diaz, also a senior, served as a co-captain along with Hill and was an exceptional leader.

"What Karli brings to the team doesn't show up in the stats," Kirk said.

A third senior, Autumn Foley, made several key offensive contributions, including 13 points versus Hanover Park. LeDonne, an honorable mention on the NJAC-Liberty, returned to action and continued to play at a high level.

More in this category: « All-Star Game is last hurrah Great cause, top-notch matchups »