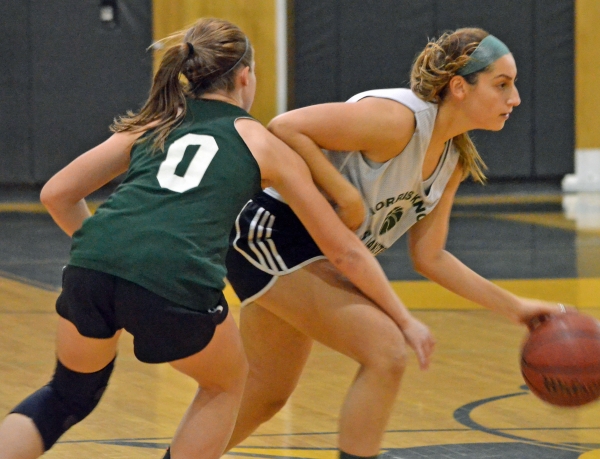 EAST HANOVER _ Defensive lapses were at the center of several of Morris Knolls' losses last season.

Sometimes, the problem was lack of communication. In other instances, the Golden Eagles weren't boxing out or not participating on help defense.

So, if Morris Knolls, which returns all of its players, seemed to fire up its "D" at Hanover Park's preseason basketball tournament in mid-November, it was for good reason.

"We need to have more teamwork, to talk more," said Golden Eagles senior Rachel Sweetser at the conclusion of the two-day tournament.

Sweetser's dad, Jamie, coach of Morris Knolls' fall team, has been urging his daughter and her teammates to pick up their defensive intensity and to position themselves better when rebounding.

"They're an older, more experienced team," Jamie Sweetser said. "There's some height. We're looking for them to jell and maybe challenge for the league title."

A portion of the proceeds from the two-day event went to a fund to help Hanover Park graduate Matt Geisser, who has a rare form of bone cancer. Geisser, now a junior at Towson University, served as captain of the boys squad. Featured items in the raffle at the tourney were a 40-inch flatscreen TV, wine basket and New York Giants tickets.

"We like to give back and do something associated with a charity or someone in need," said Al Wortmann, who has been one of the organizers of the tournament since 2007. "We try for teams from different counties and to have equal matchups. The girls really enjoy it."

Morris Knolls, playing without a few of its top players, took part for the first time and deemed it a success. The Golden Eagles lost close games to Chatham and Morristown before defeating West Morris and falling to Montville.

"It was very organized and for a good cause," Rachel Sweetser said. "We got to see Gill and Manasquan and that was cool. It was a chance to play together before the season starts."

Montville will have to get used to not having an O'Reilly in the lineup for the first time in seven years. The Mustangs, though, seem to be inspired by what they've accomplished in recent seasons and will look to keep building.

"It's going to be very different," Mustangs coach Derek Lynn said. "Players are going to have to take on different roles."

Hanover Park, which is coached by Wortmann in the fall, has both seasoned players and depth. The Hornets' top six players return, including seniors Ava Gammo, Alexa Petrozzino, Emily Seymour, Alexa Bursese and sophomore Kelsey Stites.

"I think we'll be very competitive," Wortmann said. "There are high expectations. It's the same every season. We want to win everything. The girls have to focus and work hard. They have a good chemistry."

Wortmann became involved with the tournament when his daughter, Jenna, played for the Hornets. She graduated in 2009 but the elder Wortmann remained involved. For both days of the tournament, Jenna Wortmann and another former standout, Beth Esposito, did the clock and the books.

"I just like it. I believe in Doug Wear's program here," Al Wortmann said. "I'm just a person who believes in giving back. I still enjoy teaching the kids."