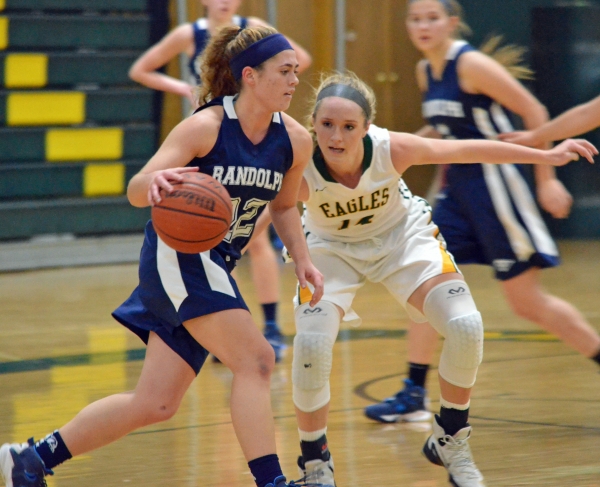 DENVILLE _ Randolph's players simply could not contain themselves after their 48-42 victory over Morris Knolls.

The Rams hugged one another and got loud after the win, their second of the 2016-17 season, and raced into their post-game meeting laughing and with wide smiles on their faces.

To some, the reaction may have been too much, too early. However, for Randolph, which took control of the Dec. 21 NJAC-National Division game with an 18-0 run that bridged the second and third quarters and sealed it with a 10-for-13 showing at the free throw line over the final 4:40, it was a release after a rocky preseason and equally shaky start to the regular season.

"Coming out of the locker room, we knew this game was important," Rams senior guard Courtney Whiting said. "People have been doubting us. This was our first conference game and winning it means a lot. Now eyes are turning toward us."

Randolph coach Pete Torres understood why his squad, fresh off an overtime triumph over Hackettstown, was so elated. He initially didn't mind the lengthy celebration then decided enough was enough and requested that his overjoyed players tone it down a bit.

"For us, this is big," Torres said. "We did not play well in scrimmages and our play in our first two games was choppy. Tonight, the team played together. Everyone helped on defense and ran plays. Our half-court trap was good."

In addition to the lengthy burst and the accuracy at the line, the half-court trap was highly effective, producing steals and breakaway layups. Overall, the Rams converted 17 of their 22 foul shot attempts. Senior guard Alana Miniovich led the attack with 13 points and sophomore Julia Wiersum had 11, including a trio of 3-pointers.

With Morris Knolls holding a 25-18 lead, Randolph (2-1) commenced its unanswered string of points. Wiersum netted two free throws with 18.6 seconds left in the second period to get the Rams within three, 25-22. Jennie LaMancuso tied the score, 25-25, with a 3-pointer 38 seconds after the break. Juliette LaMancuso (9 points) dropped in a layup before Wiersum, who also came up with five steals, fired in another 3. Randolph's advantage kept building and reached 10 points, 38-28, on Juliette LaMancuso's close-range basket. Morris Knolls' five points in the third quarter were in the last 2:20.

The third period ended with the Golden Eagles' Carli Van Riper stealing the ball near halfcourt and passing to Christi Conroy, who scored to leave Morris Knolls trailing by eight, 38-30.

"We're not a selfish team at all," Randolph's Juliette LaMancuso said. "We work very well together. We have goals and try to reach them. We're very motivated. We learn from our experiences. Overtime was a great experience and will help us improve."

Morris Knolls coach Rob Moore gave all of the credit to the Rams for coming from behind and clamping down on defense.

All 13 of the Rams' fourth-quarter points came at the free throw line. Whiting made 4-of-5 foul shots while Miniovich and Juliette LaMancuso had three apiece.

"Going 17 for 22 at the line is good," Torres said. "In practice the other day, I got on them because they were only 50 percent. I wanted them to take it seriously and get a routine down. We did some extra free throws and it worked."

The Golden Eagles did not quit and pulled within three, 45-42, on Vanessa Elliott's 3-pointer with 24.8 seconds remaining. Randolph closed out by converting 3-of-4 free throws. Foul shots made a difference versus Hackettstown as well as Miniovich sank four in OT.

"We struggled with free throws before," Wiersum said. "We want to be at least 70 percent in practice. They helped at the end again tonight. Our motivation to win is strong. We came together and worked as a team. We have each others' backs."

Whiting, one of the captains, was pleased with the outcome and how the Rams withstood pressure.

"It's fun to play under pressure but we don't want that every time," she said. "Games like this are good. In the future, we'll know what to do. You calm yourself and calm the team."