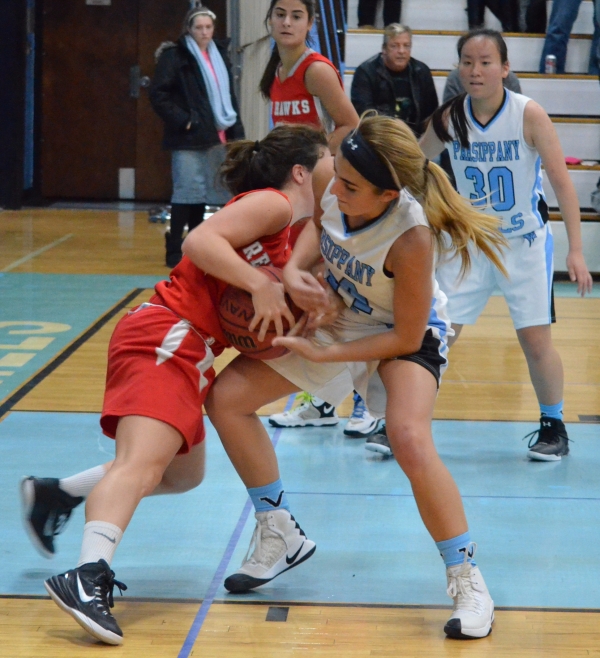 Donnie Forster, whose Vikings were clinging to the slim lead, requested a timeout and went over a play.

Shortly after, seniors Katie Kerrigan and Victoria Lombardi delivered. Kerrigan nailed a 3-pointer 28 seconds later, boosting Par Hills' advantage to a much more comfortable seven points on the way to a 40-36 win over rival Parsippany.

"That was a pick and pop off a screen with Victoria," Forster said. "It was a big play. We had quite a few. It's great beating your crosstown rival with the stands full of people. Our girls did an excellent job."

There certainly was an abundance of critical offensive plays made by the Vikings in the non-conference game on Friday, Dec. 23. Their 2-2-1 press also played a critical role.

Kerrigan, a forward, was just one of the standouts, netting 10 of her 18 points in the second half. Kerrigan, whose aunts, Laura and Janet, starred at Randolph in the 1980s, converted 3-of-4 free throws after the 3-pointer to widen Parsippany Hills' advantage to 10 points, 38-28.

"We've already had two really close games against Morris Hills and Lenape Valley," Kerrigan said. "We used those as learning experiences. We really wanted to beat Parsippany and get our first win. Parsippany is our rival so it's amazing to get this under our belts. We need this confidence to get started."

The Vikings (1-3) were sluggish at the start, falling behind, 10-4. Parsippany received four points from Tia Ayton in the opening eight minutes. Parsippany Hills used five points by Corinne Diaz and four by Kerrigan in the second quarter to battle back and knot the score, 16-16, at halftime.

When Forster had the Vikings press after the break, the momentum quickly changed. Sanjay Kao came in off the bench to handle the ball so that Lombardi could move to the shooting guard spot. Lombardi had only five points but was a force in other ways, getting weakside rebounds and defending Parsippany's Luisa Barone.

Parsippany Hills thrived with three guards on the floor. The Vikings scored the first two baskets of the third period - a 3-pointer by Lombardi and a putback by Jillian Rodgers - to go up, 21-16. The home team never lost the lead after that. Diaz had a 12-foot jumper at the buzzer signaling the end of the third quarter for 25-21.

The Red Hawks fought and stayed close but Parsippany Hills did not yield. The Vikings' fourth quarter not only featured the stunning 3-pointer by Kerrigan but a 3-pointer by Diaz and plenty of ultra-tight defense.

"We weren't as nervous as we were in the last two games," Diaz said. "We made a lot of turnovers. We focused more in this game. I was a little nervous because a lot of people were watching. I started making my shots and felt better. Our press worked really well."

"It was a pressure game and they made a few extra plays," he said.

View the embedded image gallery online at:
https://soar-nj.com/sports/basketball/item/1359-parsippany#sigProId316cd4e07a
More in this category: « Randolph gets on track Wolfpack stumble in tourney »