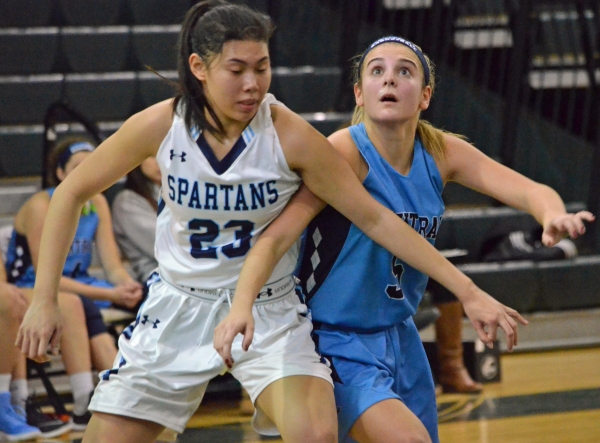 Photos by Sandy Seegers Immaculata's Izzy Reyes and West Morris' Maddie Selvaggi box out in the fourth quarter of a game at the Len Sepanak Memorial Tournament.
Rate this item
(6 votes)
Tweet

BASKING RIDGE _ No matter what the circumstances during his 11-year tenure as head coach of the West Morris girls basketball team, Fran Gavin never questioned his team's effort and hustle.

That's why Gavin was so perplexed after the Wolfpack lost 51-36 to Immaculata in a matchup at the Len Sepanak Memorial Tournament on Wednesday, Dec. 28 at Ridge High School.

"I'm extraordinarily disappointed," a very glum Gavin said. "I don't get it. By far, this is the youngest and most inexperienced team we've had but, typically, that doesn't matter. They always play hard. I didn't see that today. It just came down to effort."

What irked Gavin the most was West Morris' showing on the offensive boards. The Wolfpack (3-2) had zero rebounds on their end in the opening half while Immaculata had nine. The trend continued after halftime and West Morris ended with one offensive rebound to the Spartans' 20.

"Immaculata had three in one possession," Gavin lamented. "We have good kids, nice kids... Maybe it was just a bad day."

Junior guard and co-captain Maddie Selvaggi was equally disturbed by those statistics. She said "everyone was slow and didn't box out."

"We didn't do the little things," said Selvaggi, the lone returning starter from last season. "We could have made better passes. There were too many turnovers. Rebounding is an effort thing. Some of us didn't want to win it. It's just a battle for the ball. You don't need to be more skilled than another player to get a rebound."

Although lacking seasoning, West Morris tends to have an abundance of athleticism and desire. Those traits did not shine through in the game versus Immaculata. Besides Selvaggi, the only other players who saw varsity action in 2015-16 were Ashley Applehans, a senior co-captain, and Annie Mauldin.

"The girls are still adapting to the intensity level of varsity," Gavin said. "The physicality and aggressiveness needed for varsity are different than JV. It's a process. I guess the adjustment may be longer than anticipated."

West Morris fell behind, 21-11, in the first quarter and was unable to recover. Immaculata, anxious to get off to a quick start after a sluggish beginning versus Mendham, built its lead behind Naiya Jefferson and Anna Oliveri, who had eight and seven points, respectively.

In the second period, the Spartans continued to rule the rebounding and the Wolfpack's attack never got fully on track. Immaculata entered the locker room with a 34-21 lead.

"We were playing in the moment," Selvaggi said. "We need to be two steps ahead of the other team. We have to be able to think faster than our opponents."

"We were OK offensively," Gavin said. "Defense was the problem. We weren't communicating. We weren't jumping doubles when we needed to or doing it when it made no sense."

"We lost our opener to Pope John and learned from it," Selvaggi said. "This one will help us grow, too. We have to put the losses behind us and just improve."