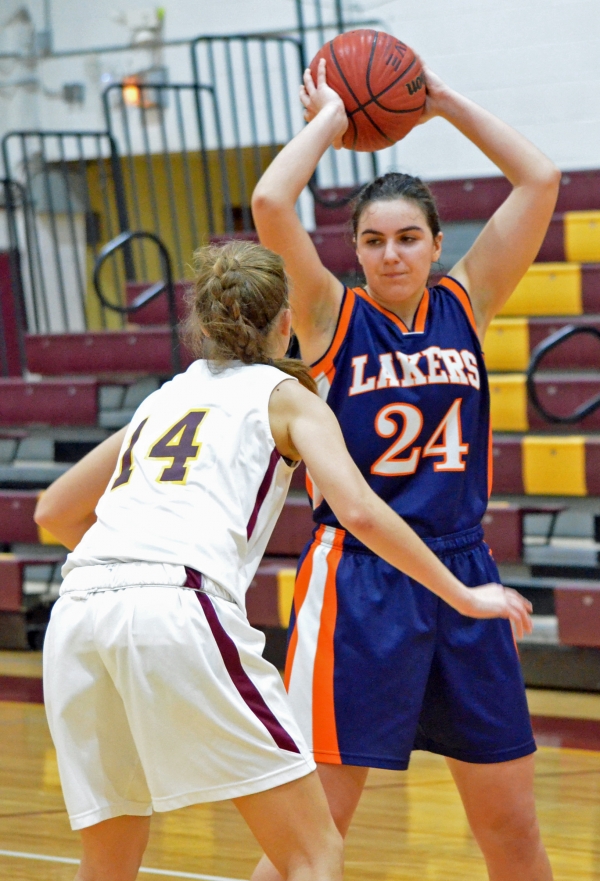 MADISON _ Mountain Lakes' players couldn't help but think back of their one-point loss to Villa Walsh when Madison chipped away at their lead in the fourth quarter.

The Dodgers got within four points with 4:22 left but the Lakers didn't fold. Instead, Mountain Lakes got the next two baskets and proceeded to outscore Madison 11-6 to gain a 38-29 win on Tuesday, Jan. 3.

"Our nerves got ahold of us in some of our games and we began to overthink everything," said senior forward Krysta Rigby, whose 17 points paced Mountain Lakes. "Today, we focused and played the way we can. We kept turnovers to a minimum and that was a plus. We saw the court well and didn't force passes."

Also critical in the NJAC-Liberty Division game was the Lakers' communication.

"We were talking a lot better," Rigby said. "We weren't loud enough in some of our other games. We talked and were calmer and more focused."

Versus Villa Walsh on Dec. 19, few of those elements were present late in the game. Mountain Lakes (2-4) led 31-23 at halftime and widened its advantage to 12 points after three periods. However, in the fourth quarter, the Vikings overwhelmed the Lakers with a 17-4 showing.

Of course, that game weighed on Mountain Lakes and was the start of a four-game losing streak.

"Our girls did very well today," Lakers coach Mike Killingsworth said. "I was impressed with how they handled it when they cut into our lead. The team didn't panic. It would have been easy to. I think the one-point loss to Villa Walsh is the kind that's always in a player's mind. This had happened to us before and we couldn't make shots. We were aiming the ball rather than shooting it."

After Catherine Crowley's close-range jumper left the Dodgers (1-5) trailing, 27-23, with 4:22 remaining, Mountain Lakes did not yield or allow nerves to intervene. Instead, it took charge.

Genny Smith inbounded the ball at halfcourt then got the ball back and cruised in for a layup, boosting the Lakers' advantage to six points, 29-23, with 3:31 left. Sixteen seconds later, Rigby dropped in a layup after making at steal near halfcourt. Jessica Torch, who scored four of her nine points in the closing period, had a pair of free throws and was the recipient of a long pass from Smith that resulted in a basket.

"We began to get a little anxious but we refocused and relaxed," said Rigby, a three-year starter. "We needed to keep the lead. I think winning today will get us ready for the rest of the season. It brought up our confidence."

Madison, paced by Crowley's 10 points and Mitra Sharif's trio of 3-pointers, pleased its coach, Gene Melleno, with its fight.

"Our problem was we fell into a 21-6 hole at halftime," Melleno said. "We're not strong enough offensively to come back. We hung in there and gave it a good try. That slow start killed us. I liked that no one quit. Everyone gave 100 percent. That's all you can ask."

According to Melleno, rebounding on the offensive end has been an issue.

"We get good looks but we're one and done," he said.

Mountain Lakes came out strong, going up 11-0 in the first quarter behind Torch's five points. Rigby was at the forefront in the second period, scoring eight points.

"We're all excited for the rest of the season," Rigby said. "We can start over."