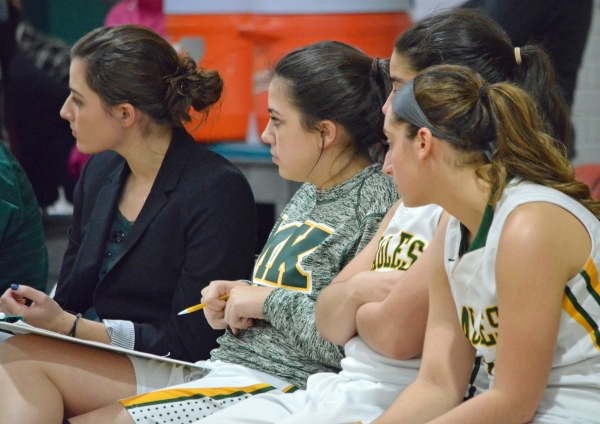 Sweetser, sidelined since suffering a torn ACL in the Golden Eagles' last scrimmage versus Somerville on Dec. 13, bid farewell to high school basketball in a game against Belvidere on Monday, Jan. 9.

Being among the first five again and getting a layup off the opening tip meant the world to Sweetser, a three-sport athlete. She will long remember Krista Mitarotonda winning the tip and Vanessa Elliott setting up the last field goal of her career.

"It's closure," Sweeter said, explaining why the opportunity was so important. "I finally got to play my last game."

Not only was Sweetser's appearance special, Morris Knolls, aided by Mitarotonda and Christi Conroy's combined 20 points in the first half and a 12-point run to start the third quarter, carved out a 51-39 victory over Belvidere.

Sweetser was touched by the gesture to wear her uniform one more time and by the support offered by her coach, Rob Moore, her teammates and the fans. Conroy gave up her starting position.

"I'm very appreciative of what I have and of everyone," Sweetser said. "For Christi to give up her spot... Everyone ran to me after I scored. We're a family. We take care of each other."

Moore contacted Belvidere coach John O'Neil to arrange the chance for one last basket because his squad also has a player, Adrienne Amey, out with a torn ACL. O'Neil, of course, agreed to the plan. Amey, who has 1,068 career points, was not on hand. Amey, a senior guard, sustained her injury two days before the season opener while playing powder puff football and already has undergone surgery.

"You hate to see this happen senior year," O'Neil said. "This was the least we could do for that young lady. It's a shame that they got hurt. Adrienne could have been our all-time leading scorer. What can you do? Accidents happen."

Moore had an abundance of praise for Sweetser, also a standout in volleyball and softball.

"This was good for Rachel, good for her family and good for the program," Moore said. "Rachel liked the idea of being in the starting lineup again. She's a hard worker, a heart-and-soul kid for all the programs she's involved in. We miss her energy and effort."

While unable to compete, Sweetser, the starting third baseman for the softball team, has been doing statistics.

"It makes me feel like I'm still a part of the team," she said. "I help coach. I'm in everyone's grill. I repeat what Coach Moore says. I still have a voice."

With Sweetser looking on, Morris Knolls improved its record to 7-1. The 12-point burst was highlighted by Elliot's three-point play and Becca Fair's 12-foot jumper 2:43 into the second period that extended the Golden Eagles' lead to 42-22.

Fair later had another jumper from 15 feet out with 2:19 remaining to make the score 48-39 and stave off a possible comeback by Belvidere.

***Photo gallery below, including picture of Rachel Sweetser, No. 15, in a game versus Randolph last season***