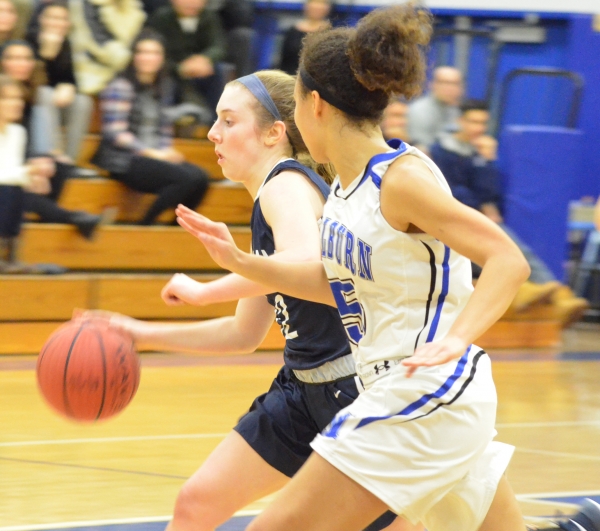 MILLBURN _ Thirty three. That number will be stuck in the mind of Chatham coach Joe Gaba for awhile.

Gaba could not comprehend how the Cougars, typically stingy on defense, could surrender so many points to Millburn by halftime. He wasn't knocking the Millers' offense and solid play. It's just that Chatham's "D" is so reliable and cohesive that a subpar showing was difficult to fathom.

"That was our worst defensive effort this season," Gaba said following the Cougars' 58-55 setback to Millburn on Friday, Jan. 13. "We got greedy. Instead of steady on-ball defense, we tried to do too much."

For their three previous games, the Cougars (8-4) thrived with their man-to-man defense, limiting Mendham, Roxbury and Parsippany Hills to 32 points or less over 32 minutes. Earlier in the season, four other teams were held to 31 or less.

However, versus Millburn, the defense was overaggressive and focused on steals. The Chatham players knew precisely what went wrong.

"We were always trying to go for the ball," Cougars senior co-captain Liz Ford said. "We really did get greedy. We've been playing defense well and very hard. That's the strongest part of our game but, tonight, it was the weakest. We're just going to have to learn from our mistakes."

Michelle Connolly, the other senior co-captain, also felt the hawkish yet careless defense was a major factor in the loss which followed three consecutive victories.

"No one was thinking of how their actions would impact everyone else," Connolly said. "We didn't react well when someone got hot, either. I think we were surprised by Millburn's intensity. It took us back a step. It was tough to establish ourselves, be in control and on top."

The Millers raced out to a 19-16 lead in the first quarter behind Layla Stansberry's 10 points. Chatham was paced by Ford who fired in two of her four 3-pointers. Rachel Hubertus asserted herself in the second period, scoring six points for Millburn. Chatham faced a 10-point halftime deficit and, although it outscored Millburn 19-11 in the third quarter to close the gap to two points, 44-42, it was unable to take complete command.

"We played composed and didn't have many turnovers," Millers coach Dave Drechsel said. "We handled their pressure. We had some players step up tonight. We needed that because we were coming off losses to West Orange and Bloomfield."

Millburn outscored the Cougars 8-3 over the first five minutes of the closing quarter and led 52-45. Chatham kept inching closer and pulled within three, 53-50, on free throws by Veronica Kelly (19 points, 9 for 12 from the foul line) with 1:08 remaining. Kelly made it 53-52 with a field goal at 42.5 seconds. The battle continued as Kelly made another basket at 20.1 seconds to bring the Cougars within one, 55-54.

Stansberry, who had a game-high 21 points and was 4 for 4 from the foul line, was surrounded by three Chatham players and fouled with 14.3 seconds left. The sophomore converted again to put Millburn on top, 57-54. At 7.5 seconds, a Chatham player was fouled while attempting a 3-pointer and converted only one free throw. Gina Saggio (10 points) concluded the scoring with a foul shot 5.1 seconds.

"Layla and Gina, our sophomores, really stepped up tonight," Drechsel said. "They had free throws and were strong down the stretch. We executed and didn't turn the ball over. If we do those two things, we'll always be in the game."

Kelly, a junior center, had 16 of her 19 points in the second half to spearhead Chatham's comeback.