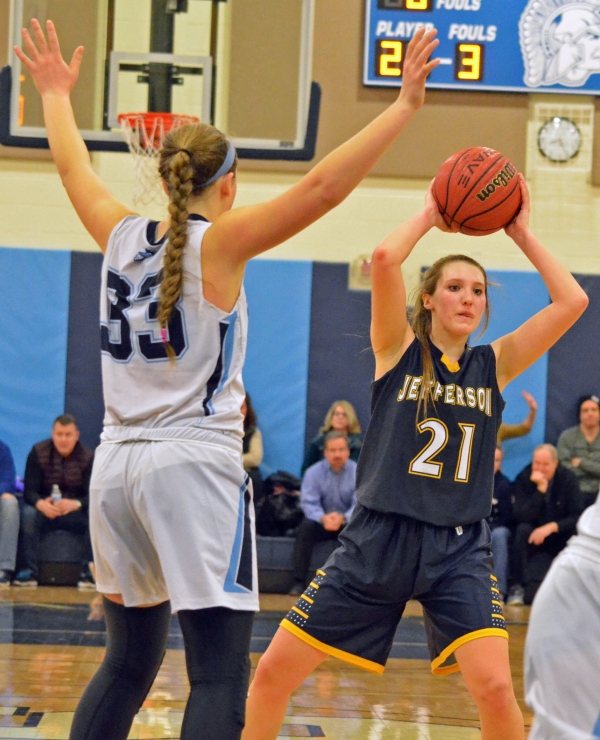 Photos by Maryann Harlow Nicole Lemieux of Jefferson, No. 21, played exceptional defense in the Falcons' win over Sparta.
Rate this item
(8 votes)
Tweet

SPARTA _ Jefferson's Nicole Lemieux was not gifted with height.

Lemieux, a junior forward, stands just 5 foot 6 but that's not a detriment. When she is called upon to mix it up with players taller and stronger, she simply takes on the challenges.

On Friday, Jan. 20, Falcons coach James MacDermid put Lemieux on the court midway through the first quarter in what he termed "a nightmare scenario." And, Lemieux, the replacement for 6-foot-3 freshman Shelby Murawinski who had two fouls, immediately went to work, getting tips, boxing out and disrupting Sparta's offense.

"I know I'm small," said Lemieux, a major factor in Jefferson's 49-30 NJAC-American Division victory over the Spartans. "My coach told me that it doesn't matter. It comes down to skill and will combined."

Last season, Lemieux went back and forth between junior varsity and varsity. This winter, she's been solely varsity, generally the sixth player, and MacDermid has been immensely grateful for her all-out efforts.

"Nicole plays big and physical," MacDermid said. "Her long arms make up for her lack of height. She frustrates the bigs inside. My co-coach Travis Gage and I had talked about how Sparta could hurt us with their size. Those two early fouls on Shelby had me concerned. I was glad to have Nicole ready to go in."

Junior Erin Walsh and sophomore Emily Dilger, both 5-10, were in Lemieux's sights. The pair had been lethal recently, often combining for 25 or more points. They've also proved reliable with rebounds and putbacks. Walsh and Dilger were less effective versus Jefferson, totaling 12 points between them. Some of it had to do with Lemieux, also in top form when assigned to Chatham standout Veronica Kelly.

"It's my first full year of playing against these girls," said Lemieux, the starting left fielder for the softball squad. "I had to take a step forward. I worked hard over the summer and improved. Whenever the coach needs, I'll work my butt off to do it."

The Falcons (11-1) still got off to a solid start against Sparta, outscoring their opponent, 17-10, in the opening period behind seven points by junior guard Taylor Langan (25 points, 9 rebounds). However, that didn't ease MacDermid's mind. He felt more comfortable by halftime when Jefferson led, 22-14.

In the third quarter, Jefferson received nine points from Langan and widened its advantage to 38-20. Senior guard Ashley Hutchinson's 3-pointer from the right corner with 3:47 remaining in the period came in the midst of a seven-point run and put the Falcons in front, 29-18.

"That 3-pointer was a big shot," MacDermid said.

Jefferson had the upper hand over the remainder of the third quarter with a 9-2 burst. Langan had all nine points, getting a basket off a putback and making several layups. Sparta, without another inside threat, Erin Scott, converted only 3-of-11 field goals attempts in the eight minutes after halftime and that hurt.

"Our girls didn't show up tonight," Sparta coach Cathy Wille said. "We missed chances to keep it close. Taylor is a great player. We did not play to win. When we do that, we look like we looked tonight."

Murawinski followed Langan with eight points, six of them coming in the second half. Dilger, Brianna Falco and Emily Lake had seven points each for Sparta.

"This whole team has a great work ethic," Lemieux said. "There's lots of energy. It's incredible. In the locker room, we pick each other up. We never let down."