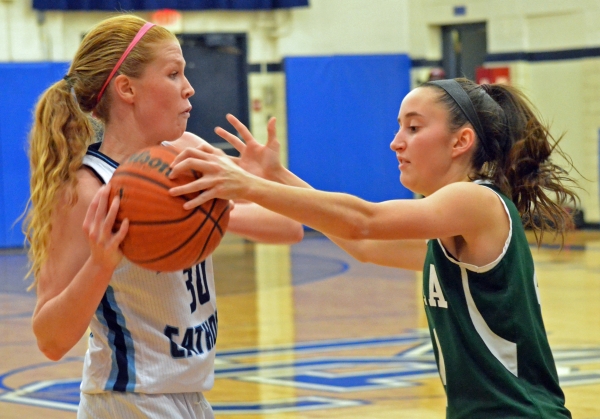 Photos by Sandy Seegers Emily Schum of Morris Catholic, left, works to retain possession of the ball while under pressure from a Villa Walsh player.
Rate this item
(6 votes)
Tweet

DENVILLE _ It has been a season of extremes thus far for Morris Catholic.

Solid efforts followed by lackluster ones. Letdowns on defense after stretches in which the Crusaders have been relentless.

On Monday, Jan. 30, Morris Catholic coach Rich Fachet was witness to a strong start by his young team as the Crusaders raced out to a 12-3 lead in the first quarter versus Villa Walsh and soon went up 16-3. Foul trouble ensued and the Vikings began to solve center Emma Duerr, who had six points in the opening period.

Three minutes and 18 seconds after halftime, Morris Catholic's lead was in serious jeopardy when Mary Walsh fired in a 3-pointer to bring Villa Walsh within three, 29-26. At that point, Alyssa DeBlasis got hot from long range, netting three field goals, two of them 3-pointers, to help the Crusaders widen the gap en route to a 45-36 victory.

"We've had ups and downs. Good and bad," Fachet said. "We've had a tendency to let other teams back in. We relax and... We were fortunate to stay a little bit ahead.

"We're beginning to play better, especially defensively, of late. Alyssa's becoming a very serious threat and really stepping up. Villa Walsh was aggressive. They played well and had 3-pointers. Villa Walsh collapsed on Emma and she had trouble getting shots off. They had a chance to win it but we just had some big points at the end."

Fachet noted that Morris Catholic (11-4) had a junior, three sophomores and a freshman on the court at certain junctures as it coped with its foul issues. DeBlasis, a transfer from Caldwell, boosted the attack in the second half, scoring 11 of her game-high 17 points. DeBlasis had 50 field goals from outside the arc as a sophomore playing for the Chiefs. Over five games for Morris Catholic, she has 10 3-pointers and is averaging 12.2 points per game.

DeBlasis was didn't sweat it when Villa Walsh, successful in switching defenses, threatened.

"Villa Walsh went up to guard the point guard and then I sank down," DeBlasis said. "I was a little nervous when they got closer but I have confidence in my shot."

Sophomore Danielle Mills had five points and several key steals in the second half for Morris Catholic. Mills, charged with three fouls in the opening half, powered in for a layup with 2:40 remaining in the fourth quarter and put the Crusaders in front, 42-36. Right before that, DeBlasis completed an 11-point run that bridged the third and fourth periods for Morris Catholic.

"We kept them off balance by switching defenses," Villa Walsh coach Van Johnson said. "We were opportunistic on offense. We climbed back in slowly. Near the end, we had three or four shots that would have brought us back to four points. They didn't fall. In the future, we need to make those. The girls played their hearts out."

Shea McGuire was one of the players assigned to Duerr and played her tightly.

"Shea did a great job," Johnson said. "She pushed Emma off the block and took her out of her comfort zone."

Fischer, a senior guard, was at the forefront of Villa Walsh's rally, scoring all 14 of her team-high points in the second and third quarters. Fischer had back-to-back 3s to open the third period.

"Erin's an excellent ballplayer," Johnson said. "She's come up with some big shots for us. Her last-second shot helped us beat Mountain Lakes recently."

Morris Catholic, the defending Morris County Tournament champion, feels it is rounding into form and hopes to have more consistent showings in the coming weeks.