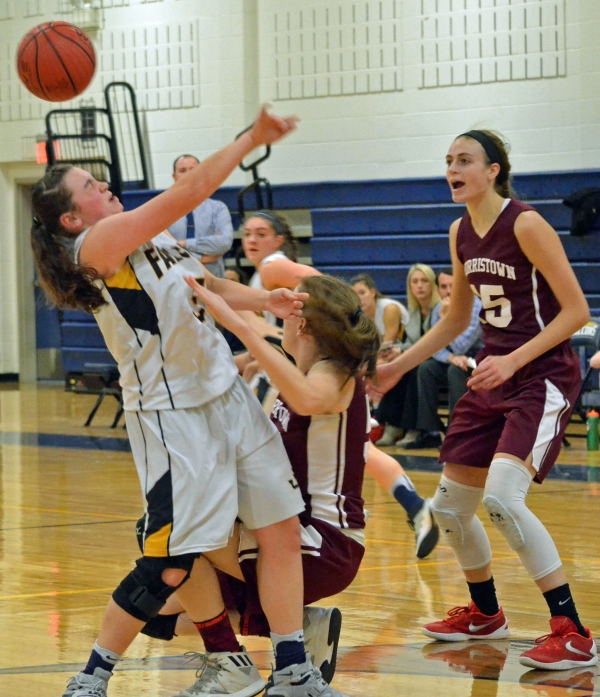 JEFFERSON _ Kimberly Calloway took a minimal amount of credit for the clutch 3-pointer that snapped a 42-42 deadlock with 3:55 remaining in the fourth quarter of Morristown's game versus Jefferson.

The ball had made its way - rapid fire - around the perimeter and through the key before Calloway, without a field goal since the opening period, made the long-range basket. Forty-one seconds later, MG Vallacchi fired in another 3-pointer, enabling the Colonials to further distance themselves from the Falcons.

"The ball movement helped me get it," said Calloway, the senior guard who finished with seven points in Morristown's 51-42 victory over Jefferson on Thursday, Feb. 2. "I had to trust my teammates and we had to keep our composure. My shots weren't dropping before that. I was so glad that went in."

Vallacchi, also a senior guard, was delighted to get her lone points at crunch time, noting that the game was "intense and tough."

"We stayed together and kept up the defensive pressure," Vallacchi said. "We made sure we didn't give anything away. When we're open, we're supposed to shoot. We moved the defense so it was a clear shot. I gathered myself. I took my time."

Tara O'Neill, a freshman, closed out the scoring for Morristown with 1:10 left, dropping in a layup after making a steal.

Of course, coach Jim Pisciotto was pleased with the manner in which the Colonials (14-1) closed out the game.

"It was exciting," Pisciotto said. "It was a great high school basketball game. Jefferson has one of the best players in the county. Winning here tonight was very rewarding. Even though Jefferson tied it, we came back. Kim's basket was big. She was open, set her feet and shot. That changed the whole thing."

Morristown, which received 20 points from Elizabeth Strambi, was up by 11 points, 40-29, after pulling away with an 11-2 run in the third quarter. Strambi netted a 3-pointer with 2:16 remaining, giving the Colonials their largest advantage.

However, the Falcons, whose spirits were lifted when Nicole Vassallo nailed a 3-pointer at the halftime buzzer, came back. Ashley Hutchinson had back-to-back 3s to pull Jefferson even, 42-42.

After the 3s by Calloway and Vallacchi, the Falcons (15-2) had several turnovers and their field goal attempts were errant.

"Things could have gotten out of hand at the end of the third quarter when we were down by 11," Jefferson coach James MacDermid said, "We exhibited mental toughness by coming back. Resiliency was a positive. It's been awhile since we've been challenged like this.

"Nicole and Ashley, our seniors, were everything you could hope for. We looked to them. The lights were bright and we responded. Later in the game, we had our chances but we were careless with the ball and rushed our shots."

Morristown, whose lone setback was to Sayreville, established an 18-14 lead in the first quarter thanks to Strambi's eight points and O'Neill's six. Taylor Langan, who topped Jefferson with 20 points, had seven points over the initial eight minutes.

Prior to the game, MacDermid warned his team to take care of the ball.

"I told my players that a turnover is an assist for Morristown. They'll convert it," he said.