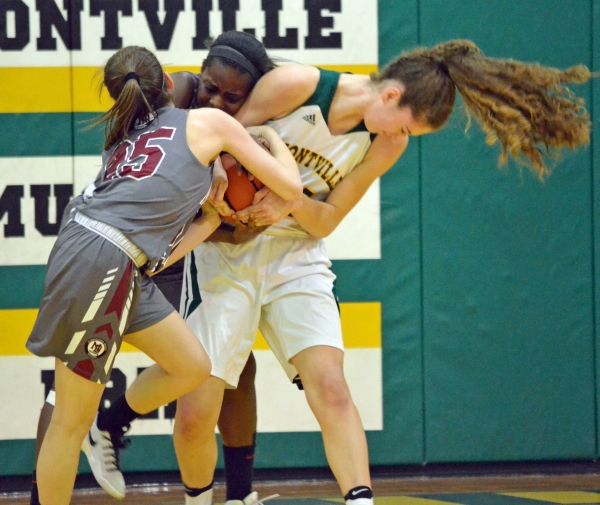 MONTVILLE _ In the opening quarter of its Morris County Tournament first round game against Morristown-Beard, Montville was ultra exuberant.

The fourth-seeded Mustangs were sharp in all aspects, scoring 15 points while limiting the Crimson to three. However, it didn't take long for Montville to lose some of its intensity and enthusiasm, getting outscored by 13th-seeded Morristown-Beard 11-2 in the eight minutes before halftime.

Although Montville didn't take its game to the highest level again, it pulled out a 35-26 win over Morristown-Beard on Saturday, Feb. 4

"Consistency has been an issue for us and it still rears it head every once in awhile," Mustangs coach Derek Lynn said. "It's about energy. We want players to be vocal and lead by example."

In most instances, Montville (14-3) has two strong quarters and two weaker ones. This time, the scenario was considerably more unsettling.

Senior guard and co-captain Lauren Minardi was the bright spot, netting 5-of-6 free throws in the fourth quarter to help the Mustangs attain a slim advantage. Minardi, usually accurate from the foul line, converted only one of four attempts over the initial three periods. The team was 8 for 10 over the final three minutes.

"Our energy was high in the first quarter but dropped in the second quarter," said Minardi, who topped Montville with 10 points. "All we need to do is bring our energy back up to get the win."

She attributed her success from the line in the waning minutes to "focusing." Minardi's most critical foul shots swished through the net with 1:18 and 38.7 seconds remaining, sealing the victory. The Crimson (10-9) were within five, 31-26, after Sarah Bregna's field goal with 1:47 left.

"When I began shooting the one and ones, I was a little nervous," Minardi said. "I was off in the beginning. I had to shake it off and make the ones I had to make."

Lynn had faith in Minardi, one of the Mustangs' best free throw shooters. His team has been practicing foul shots a lot in recent practices as part of a shootathon. The girls solicit pledges and the funds raised are donated to charities such as Coaches Versus Cancer.

Montville was wary of Morristown-Beard despite prevailing 36-25 on Jan. 18.

"I warned the team that they play us closely," Lynn said. "We had to focus on rebounding and they still won that battle today. In the first game, we both missed a lot of shots. They play hard on defense and so do we. We know each other well. Execution and rebounding were the two big things. Too many times we'd miss the first shot and that'd be our possession."

The Crimson, paced by Bridget Monaghan's 14 points, had won three games in a row before falling to the Mustangs.

"Montville is physical," Morristown-Beard coach Mike Sturgeon said. "I hoped a tighter game would be called but it wasn't either way. There was reaching and pushing on both sides. It's tough to play in that flow but our girls battled. Montville is seasoned. We're younger."

Morristown-Beard survived January when it was missing three starters due to illness and injuries. The Crimson turned in respectable efforts in games against Montville and Jefferson.

As for the Mustangs, they're looking forward to their MCT quarterfinal matchup against fifth-seeded Chatham on Saturday, Feb. 11 at Morris Knolls at 5 p.m.

"We just go game by game. We work on our mistakes," Minardi said. "We're excited for the quarterfinals. We're going to go for it."