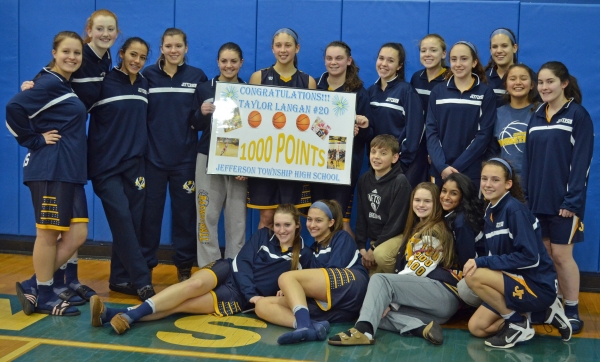 SPARTA _ It was an emotional moment for Nicole Lemieux when Taylor Langan, her best friend since kindergarten, scored her 1,000th career point for Jefferson.

"Wow! It's just crazy," Lemieux said of the junior guard's achievement. "I love to see Taylor succeed. It was special. I'm so excited about it. This definitely isn't it for her. Taylor's going to do more things, bigger things."

What lies ahead for Langan, of course, is unknown but the milestone she reached in a 54-49 loss to Pope John in a NJAC-American Division game on Tuesday, Feb. 7 is certainly a significant start. Langan, who finished with 24 points, dropped in a layup 1:46 into the third quarter to reach 1,000. She is the 15th player in the Falcons' girls basketball program to hit the mark.

She would have preferred a victory, especially because the setback put Jefferson in a three-way tie with Pope John and Sparta in the conference, but was proud to earn a spot on the banner in Jefferson's gym.

"Coming into this season, it was a goal but I'm always more focused on the team," said Langan, committed to the University of Delaware. "Getting 1,000 points is a huge deal. I saw Julia (Murawinski) get it and it was so cool. I was really happy for her."

Langan had a big first half versus the Lions, scoring 16 points. However, she had to wait until after halftime to attain 1,000. When she did, the game was halted and she received flowers and a framed poster commemorating the occasion.

"Taylor is one of a long line of great players who have come through Jefferson," he said. "We've had a long legacy of successful players and teams. Taylor is in very good company. Taylor works hard and gets better every year. She's a year-round player. She not only scores but is excellent at distributing the ball."

Langan began playing basketball in the Jefferson recreation program when she was in second grade. By the time she reached fourth grade, she was bumped up two levels and had the opportunity to be on the same team as her sister, Megan.

Lemieux recalls being on the Celtics rec team and going up against Langan, a member of the Heat. The two squads always engaged in hard-fought games on the lower levels. Langan, called "T" by her high school teammates, often stays long after practice to hone her talents. Lemieux is there with her.

"What makes Taylor so good is her attitude," Lemieux said. "If someone's having an off day, she says 'Tell me you can do this.' When she says it to me, it clears my mind."

For two seasons, Langan was a midfielder for the soccer team. She continues to compete in spring track and is versatile in that sport as well, taking on the 400, 800, high jump, triple jump and javelin.

At school, she is the president of the UNICEF Club, following in the footsteps her older sister.

"It's nice to give back to those who don't have much," Langan said. "I'm very lucky to have the life I have."

Outside of school and athletics, Langan enjoys hiking and has taken to trails in Vernon and Jefferson, including the fire tower.

"I like looking at nature," she said. "It's good being outside."

For the next month, Langan will be on the court, seeking to bring notoriety to the Falcons, one of the top teams in Morris County.

Falling to Pope John, which converted 14-of-20 free throws and ruled the boards, hurt but Langan says Jefferson simply has to keep pushing.

"Tonight's game meant a lot in the conference," Langan said. "We've got to keep a positive mindset. We'll keep fighting."