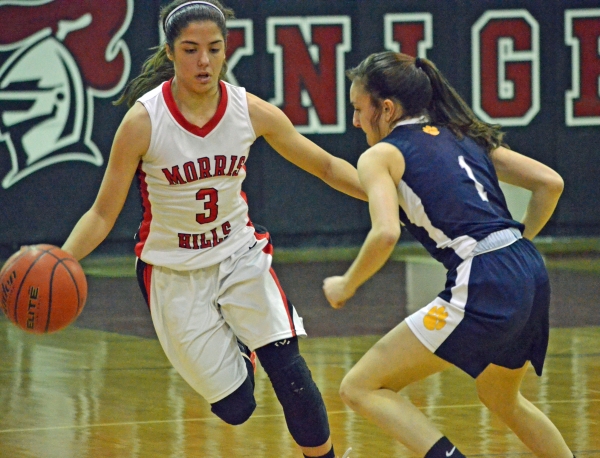 Katz noticed Panthers coach Bruce McCloud at a home game and two away ones. The extra attention reassured her that the Scarlet Knights had made progress after a difficult start. Katz was "honored" by the extra attention but she also was scared, knowing that St. Elizabeth would be super prepared and zoned in on disrupting Morris Hills' late-season success.

That's why Katz never felt comfortable, not even when the Scarlet Knights widened their lead to 13 points on Victoria Aspiazu's 14-foot jumper 1:24 into the fourth quarter. The lead kept growing and Katz finally let out a sigh of relief at the conclusion of Morris Hills' 45-25 non-conference victory over the Panthers on Tuesday, Feb. 21.

"For them to come and see us that often..." Katz said. "I have to say that I was nervous. We were nervous. St. Elizabeth came here hungry. They were ready. I never felt that we could relax. We couldn't put the brakes on."

After ending the first period deadlocked, 11-11, the Scarlet Knights outscored the Panthers 12-4 behind four points by sophomore point guard Maddison Perna. Maggie Lenehan fired in a 3-pointer - the third of Morris Hills' six - to help establish some distance.

Over the last three quarters, the Scarlet Knights (8-14) got more defensive rebounds and their offense flowed more smoothly.

"Our defense held us together in the beginning then we picked it up and ran our plays," said Aspiazu, who finished with 10 points.

"When we shoot more, we have more chances," Gaeb said. "We make one or two baskets and we get on a roll. This was a big game. We looked at who St. Elizabeth played and knew they'd be tough. We couldn't let up. We had to be strong mentally and physically."

Gaeb was consistent for the bulk of the game. She had 11 points in the critical second half and went 3 for 4 at the free throw line. Perna (9 points) guided the attack with intensity.

"If we fight our hardest, we know we can keep winning games," Perna said. "We can't put our heads down after we shoot. We have to focus on the positive."

Katz was relieved that the Scarlet Knights, winners of five of their last seven games, shot well. St. Elizabeth, which received seven points from Emma Corazza and six from Claire McVicar, did not and committed too many turnovers.

"Our shots were not falling tonight," Panthers coach Bruce McCloud said. "Hats off to Morris Hills. They must have shot 50 percent from the 3-point line. Their shots fell. Ours didn't."

Morris Hills has many reasons to believe it is going in the right direction. For example, six days ago, the Scarlet Knights held a 20-17 lead over Jefferson, set to meet Morristown in the Morris County Tournament final, at halftime. They opened their season by beating Parsippany Hills then lost eight of their next nine.

"We worked on form, fundamentals and developing skills at the beginning," Katz said. "During the first half of the season, we were learning then it clicked. Everything came together tonight. I'm really proud. This team works hard. They show up every day."

The Scarlet Knights have two games left - versus Bloomfield and Orange. They did not qualify for the state tournament.

"By not being in the states, we end on a high note and take it into next season," said Perna.