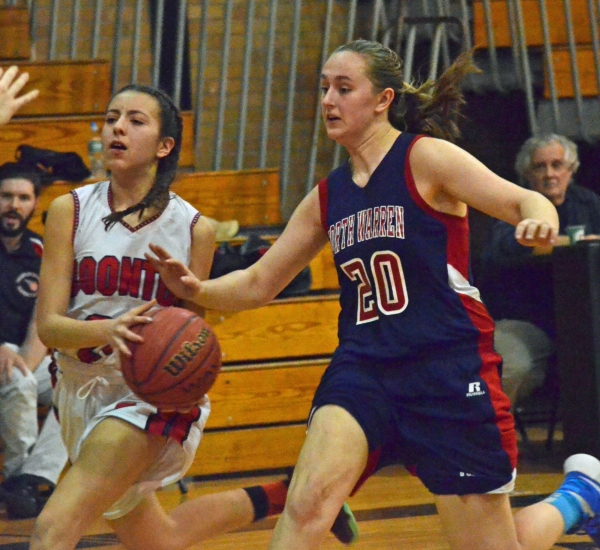 BOONTON _ The moment Boonton coach Jim Drury laid his eyes on his players, he knew a tense, hard-fought night game versus Newton the night before had taken its toll.

"As soon as I saw them in the gym, I could tell they were exhausted," Drury said.

The Bombers' mental and physical state had Drury concerned but they dug deep and garnered a 28-24 victory over North Warren less than 20 hours after falling short versus the Braves.

It came as no surprise that it took Boonton a quarter or so to build up its energy and desire in its rematch with the Patriots. The Bombers fell behind 8-0 before coming back and taking a four-point halftime lead. Sophomore guard Nina Dika had a strong first half, scoring eight of her team-high 12 points over the first two periods.

"I let them play into the game," Drury said. "I didn't get upset. They were exhausted. It was a letdown from last night. All it took was getting their legs going."

Boonton (7-19) was pleased with the win for several reasons. The Bombers are 4-2 over their last six games which means that the young squad is maturing. In late December, they fell by three points to North Warren so avenging the setback was satisfying. Finally, coming out on top after a disappointing near upset allowed Boonton to exhibit its resilience.

"We started to hit our shots and got the lead," said Dika. "We stepped up on defense and got back in the game. We didn't let anything get to us."

In the Newton game, Boonton held a one-point lead entering the fourth quarter. The Bombers played tentatively because three of their players had four fouls. The Braves outscored Boonton 17-8 over the last eight minutes and exited with a win.

"We're jelling as a team so that one hurt," Drury said. "The team has been playing well for the last three weeks. They're moving the ball and looking to the open players. We're getting more even scoring."

That's a vast improvement since the start of the season. Boonton clashed with some tough teams, including Morris Catholic and Morristown-Beard, and started out 0-7. Dika felt that the Bombers righted themselves at Wallkill Valley when they prevailed, 63-59, in overtime. That victory kicked off a span in which Boonton triumphed in three of four games.

"We were still figuring things out then," Dika said. "We had some nailbiters and lost a little hope. We kept trying our hardest. We kept going at it, no matter what the score was. We finally won and held our heads high."

A freshman, Sara Rios, scored the go-ahead points against the Patriots, netting a pair of free throws with 1:21 remaining to put Boonton in front, 25-24. Although the Bombers did not shoot well from the free throw line in the closing minutes, it was enough to get the job done. Rios joined Dika in double figures with 10 points.

"Sara is good at the line," Drury said. "She's a freshman but I have confidence in her."

In recent games, Drury has started Brianna Corporan and Katie Owens, both strong on the perimeter, and Adriana Dika along with Rios and Nina Dika.

"We're really excited," Dika said. "We know their record is better but we have a good shot at winning. I can't wait to play."

"We want to extend our season as far as we can," Drury added. "We played Newton because they're very much like Cresskill with man-to-man defense. They're all over you. We've seen films and scouting reports. We'll be ready."