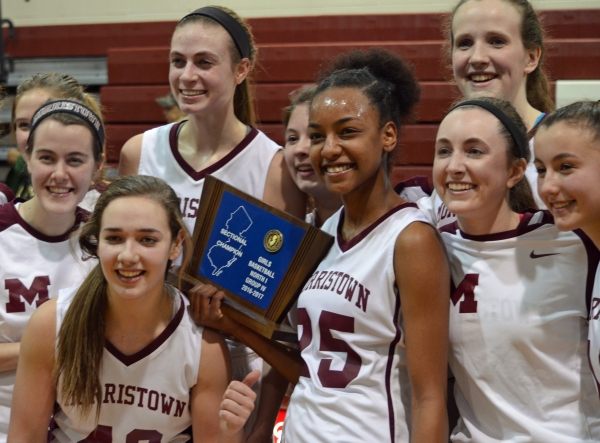 MORRISTOWN _ Morristown had taken care of all of the little details while preparing for its sectional final versus East Orange.

The top-seeded Colonials, riding high after claiming Morris County Tournament and conference titles, were ready, no doubt, but one question loomed before game time: Would it be necessary to open all of the bleachers?

The extra seating behind the team benches was needed and junior guard Liz Strambi and Morristown thrilled the enthusiastic near-capacity crowd with a 45-35 victory over East Orange to take the North Jersey Section 1, Group IV championship on Monday, March 6. The Colonials' only other sectional crown was attained in 2002.

"I'm from Morristown so to be a part of this, to win for your alma mater, to do something for the town you grew up in, is just great," Colonials coach Jim Pisciotto said. "It's really awesome."

Adding to the awesomeness were the passionate fans. Following the game, in which Strambi erupted for 25 points, Pisciotto, a star player for the boys squad in the early 1980s, was the recipient of an abundance of hugs and handshakes. His family's roots in the town run deep. He noted that his parents, Dominick and Anna, along with a multitude of relatives, attended Morristown High School.

"There were people here tonight who I haven't seen in 10 or 20 years," Pisciotto said. "The energy in the packed gym tonight was just terrific."

Morristown, set to clash with Franklin on Wednesday, March 8 at 6:30 p.m. at Union High School in a Group IV semifinal, put on quite a show versus the 11th-seeded Jaguars, who advanced to the final with victories over No. 6 Morris Knolls, No. 3 Bloomfield and No. 2 West Orange.

As always, the Colonials thrived with their defense. They raced out to an 8-0 lead. Two minutes and 48 seconds into the second quarter, Morristown went up 17-2 on a Strambi layup. The Jaguars battled back behind Moriyah Jordan's eight second-quarter points and trailed 24-11 at halftime. The fact that Morristown held the visitors to 11 points was a great source of pride for Pisciotto.

The distance between the Colonials (26-2) and East Orange widened after the break. Ayanna Smith provided Morristown with its largest advantage - 20 points - when she netted a 3-pointer 1:42 into the third period for 31-11.

However, East Orange was not done and had a stretch of four-plus minutes when it outscored the Colonials 11-2 to cut its deficit to 33-22. Spearheading the run were Jordan and Brianna Turner, responsible for nine of the 11 points.

"Our coach told us they'd have a run or two," Strambi said. "East Orange is a tough team with quick guards and they gave us some trouble. We all trusted one another and that got us through. We just kept going. We survived."

Freshman Tara O'Neill said Morristown weathered the comeback because its players "stuck together."

"We kept our heads up and stayed positive the whole time," O'Neill said. "We play well together. We don't get down on each other."

"No way with their talent was East Orange going to quit," Pisciotto said. "We knew that. We weren't going to stay up by 12 or 14 points and they'd just fade away. They're here for a reason. They're well-coached and a very, very good team."

The fourth quarter featured six points by Strambi and four from Kimberley Calloway. Calloway made a pair of free throws with 1:42 remaining to put the Colonials in front, 45-28, and ensure the victory.

"Elizabeth is a great leader," O'Neill said. "She's amazing. She keeps us together and composed on the court. Elizabeth hypes and energizes us."

Strambi was elated by the win and was "glad to bring it home for the town and the school."

"It's a dream come true for all of us," Strambi said. "I couldn't ask for more. Look... Everyone is so happy. People are taking pictures. They're excited. I'm honored to represent Morristown. We don't play for ourselves. We play for the name on our jerseys."

View the embedded image gallery online at:
https://soar-nj.com/sports/basketball/item/1385-colonials#sigProId1473bfe036
More in this category: « Mendham bows out of tourney A fine season comes to a close »