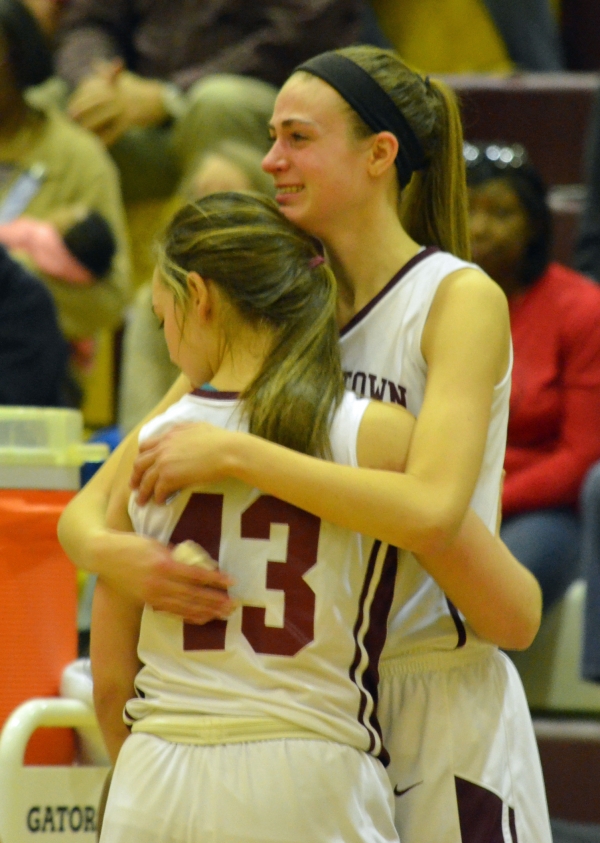 UNION _ Errant passes. Hasty offense. Not responding well under pressure. Double-digit turnovers in the first half.

Those are not the trademarks of Morristown basketball and certainly not what earned the Colonials three titles and kept them alive until deep into the season.

Morristown, normally exceptional at rattling its opponents, simply could not contend with sophomore Diamond Miller and Franklin in a Group IV semifinal on Wednesday, March 8 and lost, 61-37, at Union High School.

"I think we needed to stay together. Be more poised," said senior Kimberly Calloway, whose 12 points paced the Colonials. "We were nervous and tense and never settled down. Franklin is a really good team but we are, too. I still believe in my team and feel we did a good job."

The Colonials (26-3) seemed stunned by what greeted them in the opening period. The Warriors, Tournament of Champions semifinalists two years ago, came at them full force, playing in-your-face defense which helped them attain a 22-9 advantage. Franklin (22-7) kept it up, starting the second period with a 14-0 run. Miller (19 points) began the unanswered skein with a 3-pointer 1:57 into the second quarter. It ended with Kennady Schenck's free throws 44.5 before halftime.

Franklin had a nine-point burst in the third quarter and bridged the third and fourth periods with eight consecutive points. Morristown had been on the positive end of similar overwhelming efforts. The Colonials did not yield 22 points in a quarter this winter nor were they limited to 14 points and four field goals over the initial 16 minutes.

"They have a great point guard and we have a great point guard," Morristown coach Jim Pisciotto said. "You never think that this is how it'll happen. We made some mistakes. We were careless... We threw the ball away. We've played fast and aggressive teams. I don't have an answer. We rushed our shots. We hoped to make them work on offense and didn't really do a good job. We couldn't get a rhythm going."

After halftime, the Colonials put together a small run and reduced their deficit to 17 points, 40-23. Elizabeth Strambi, Morristown's junior standout, had only two of Morristown's nine points in the streak but was on the assist side of Calloway's 3-pointer and a basket by Kayla Bush.

At 40-23, the Warriors asserted themselves, reeling off nine straight points, four by Camille Gray. Morristown was without Bush, their tallest player, when she drew her fourth foul with 4:38 left in the third period. Bush, a senior who played a significant role in Morristown's success, fouled out 48 seconds into the closing quarter.

Keona Schenck guarded Strambi (11 points) and did not allow her much room. Therefore, Morristown never established an offensive flow. When the Colonials had possession of the ball, they were hasty with their shots or had it stolen. Franklin controlled the boards as well.

Although the finale was unfortunate, Morristown certainly had a season to remember as the squad garnered several championships, including its first MCT crown since 1980.

"Our team bonded so well," Calloway said. "We motivated each other every day. We had great season."

Pisciotto, a Morristown High School graduate, was flattered to be a part of it.

"Just to hear them say 'Coach, I'll never forget this,'" he said. "I was glad to be a part of it and enjoy it with them."