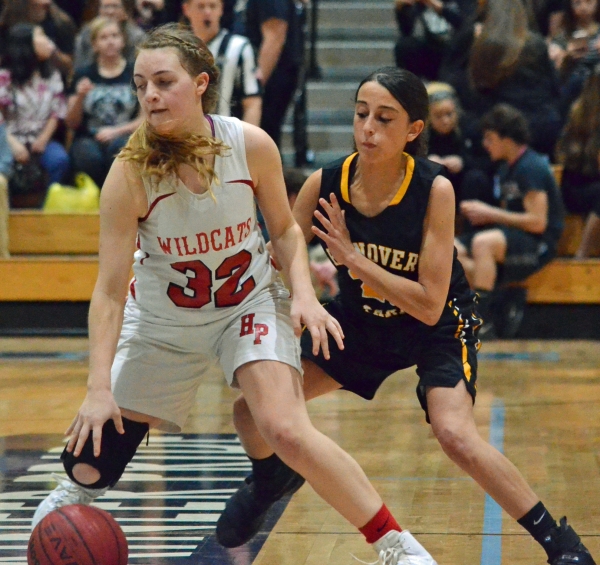 WEST ORANGE _ Alexa Bursese isn't going to dwell on the last game of her high school career, certainly not the last 10 or 12 minutes.

Bursese, who won't don a uniform in college, is going to remember all of the moments before the 48-33 loss to High Point in a Group II semifinal that brought Hanover Park's fine run to a halt.

Getting ousted from the state tournament was disappointing and it saddened Bursese and her teammates but it was hardly devastating. Much of what made the Hornets one of Morris County's top teams was on display - hustle, teamwork and plenty of desire. Hanover Park was known for striving - and often attaining - its goals. The objective for the night of March 9 was to stay close to High Point, which was taller, deeper and aiming for a second straight trip to the group finals.

"Instead of reflecting on this, I'm going to reflect on the sectional," said Bursese, referring to the Hornets' victory over Hackettstown that secured the North Jersey Section 2, Group II title. "It would have been nice to go to Toms River and play but I won't think about that. It's been a great, great four years."

Bursese, adept from 3-point range, had 19 points in the Hackettstown game, which enabled coach Doug Wear to notch his 301st win. Bursese had 16 in the opening half to help the Hornets to a 25-12 lead.

Although Bursese had some significant baskets versus the Wildcats, Hanover Park's sputtered. High Point, accurate from outside the arc with seven 3-pointers, three in the first quarter, took command with a 13-9 first quarter and stayed in front for the duration.

"They came out and just kept hitting 3s," Wear said. "I think we responded pretty well and were down by only six points at halftime. In the second half, we turned the ball over way too much. Once that happened, it was going to be tough to come back."

Bursese (6 points) netted a big 3-pointer with 4:09 remaining in the third period to bring the Hornets within four, 31-27. A layup by Alexis Sisco ensued, putting High Point up, 33-27. It was Sisco again 10 seconds into the fourth quarter for 35-27. Hanover Park continued to persevere and got a 3-pointer from Ava Gammo 27 seconds later for 35-30.

Over the last seven minutes, High Point outscored the Hornets, plagued by turnovers, 13-3. Powering the Wildcats in the last stretch was Margo Peterson, the main focus of Hanover Park's defense. Peterson, silent in the third quarter, recorded two layups and a pair of free throws.

"(Peterson) was the one we needed to stop," Wear said. "She's their best shooter. Their other players made their shots, too. We didn't match up with them very well."

"High Point is big but it didn't affect us," Bursese said. "Everyone is a shooter. They passed well and were quick. They seemed to make all of their shots."

Like Bursese, Wear isn't going to put much thought into the game that concluded the careers of seven seniors, including Gammo who topped Hanover Park with 12 points.

"We've been undersized and outmuscled all year," Wear said. "This team has the heart of a lion. What they accomplished is unbelievable. We won 25 games this year. They won three conference titles in a row and went 35-1 (in the NJAC-Liberty Division) with these players. If you came in the gym and didn't know anything about us, you'd be surprised. Our tallest player is 5 foot 9. That's why this is such a special group."

The sectional title game, highlighted by stellar zone defense, was the fourth under Wear.

"We played very well in that game," Wear said. "It was phenomenal. Alexis stands maybe 5 feet but kept us afloat with her shooting. She also had assists and steals. None of our girls are intimidating. It's been all heart and hustle."