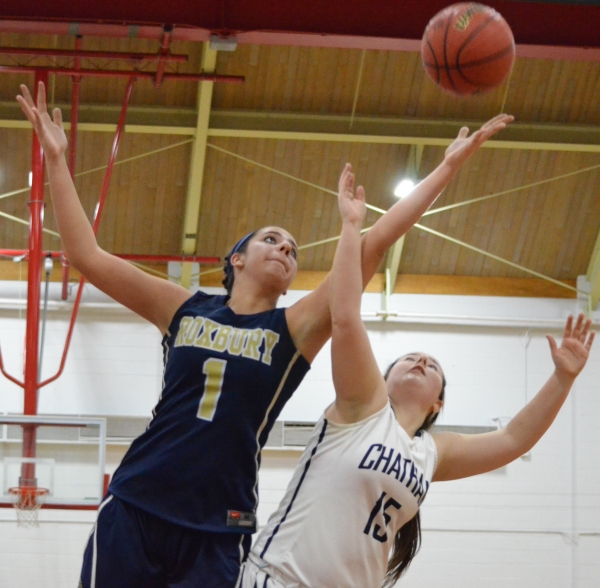 Photos by Maryann Harlow Roxbury's Giovanna Harrigan of the Black Team vies for a rebound with Liz Ford of Chatham during the 2017 Senior All-Star Game.
Rate this item
(10 votes)
Tweet

MORRISTOWN _ Kaleigh Rubino was feeling glum when Pequannock's basketball season came to an end at Ramapo in late February.

Several days later, Rubino, still feeling sad, handed in her No. 32 uniforms. Her high school career was officially over.

On Wednesday, March 22, Rubino, chosen to compete in the Morris County Girls Basketball Coaches Association Senior All-Star Game, got her home jersey and shorts back. The shooting guard's smile returned, too. She'd have one more chance to play the game she loves.

Three days later, Rubino, who sent out a Snapchat from home before the game, thrived on the hardwood at Morristown-Beard, netting five 3-pointers to help the White Team to an 84-74 victory over the Black Team.

"I was really excited," Rubino said. "I thought I got out all of my sadness at our last game. I was a little sad today. To play again was a good feeling. I love being on the court. It was bittersweet."

Rubino was one of two players from the White Team, comprised of players from the NJAC's American, Independence and United divisions, to reach double figures, totaling 15 points, one less than Morristown's Kayla Bush.

A three-year varsity player and co-captain, Rubino, headed to the University of Scranton where she will major in exercise science, had 35 3-pointers during the 2016-17 season. Her back-to-back baskets from outside the arc with 5:33 and 4:32 remaining, respectively, made the score 74-69. The Black Team, which featured standouts from the NJAC's Liberty and National divisions, trailed 44-39 at halftime but rallied and tied the score four times in the second half.

"Teams know me as a 3-point shooter," Rubino said. "After my sophomore year, I worked on my shot to perfect it. Teams sometimes put a box and one on me. Sometimes they'd say 'Don't let No. 32 shoot.'"

Three-point baskets were abundant in the All-Star Game as the triumphant White Team fired in 11 and the Black Team accumulated 10.

Rubino relished the opportunity to play with and against some of the girls she became acquainted with through AAU. Lauren Minardi and Jane Beiermeister of Montville and Alexa Bursese of Hanover Park were teammates on the International Youth Basketball squad.

"These kids have been banging heads for years and now they're teammates," said Whippany Park's Tom Wilson, coach of the White Team. "I think the kids enjoy playing one more game. The parents appreciate one more game, too. It's fun. It's definitely a good experience for the girls."

Dover's Alondra Pequeros suited up for the Black Team and realized she "missed the intensity" of basketball following a nearly month-long layoff.

"This wasn't my team at Dover but it felt like it," Pequeros said. "I played against these girls and now we were all together. It was so uplifting to be back and be in an uptempo game."

During her three years as a starter for the Tigers, Pequeros, a co-captain, proved to be well-rounded, scoring, handing out assists, making steals and clamping down on defense.

"I tried to be a leader and present the positive side of things," she said. "We played our hearts out regardless of the score. I wanted to motivate everyone."

Pequeros has plans to attend County College of Morris. She's unsure about playing basketball yet may decide to try out.

Pete Torres of Randolph guided the Black Team and considered the game "a blast."

"I had fun watching," Torres said. "The best in the county were out there. We hit some nice shots during the comeback. We were off balance at times but balanced enough to put the ball in the basket."

Morristown's Kim Calloway and Bush combined for six points to open the second half for the White Team. The Black Team then reeled off nine unanswered points to come within two, 52-50. Mitarotonda knotted the score for the Black Team, 52-52, with a putback 7:09 into the second half.

Ava Gammo's 3-pointer with 1:46 remaining was the Black Team's last field goal. The White Team had the final six points, four by Bush, to close out the scoring.