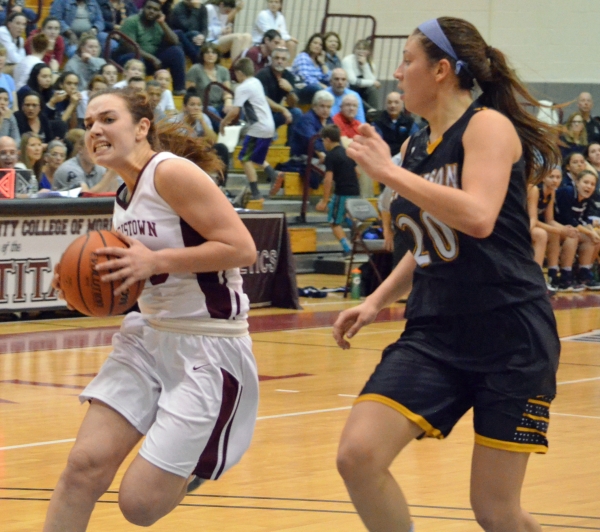 MORRISTOWN _ To the Junior Colonials, Elizabeth Strambi is a superstar.

Kids flock to Strambi, Morristown's affable junior guard. They cling to her and climb on her. Strambi, comfortable with her elite status, lets them, laughing and joking as she drags them around.

"Elizabeth is approachable, whether at clinics or games. Anywhere," Colonials coach Jim Pisciotto said. "Children look up to her. They watch her play. They look at her crossover dribble and say 'See what she just did?!?' They admire Elizabeth and she gives back. All of our kids do."

Strambi, the 2017 Soar-NJ.com Morris County Basketball Player of the Year, and her teammates recently danced with the youth players after being honored at the Junior Colonials dinner. There was much to be joyous about as Morristown celebrated its first Morris County Tournament title in 37 years as well as sectional and NJAC-United Division championships. At the forefront of all of it was Strambi, the MVP of the MCT and the Morris County Girls Basketball Coaches Association Player of the Year.

"I had fun. We all had fun," the 17-year-old Strambi said. "It was a great experience. Everyone - teachers, security guards, other students - knew when we were playing and wished us good luck. People in town knew us. I'm glad to be at Morristown High School. I wouldn't want to go anywhere else."

Strambi and Morristown needed little motivation. A loss in the 2016 MCT final provided the spark. After graduating Abby Schubiger and six other seniors, however, the season ahead had some uncertainty. With Strambi taking command, the concerns disappeared.

"Elizabeth is tough and focused," Pisciotto said. "The great ones make it look easy. Against Jefferson, Montclair, East Orange and other teams, her competitive nature was on display. There's just something in her eyes."

The statistics Strambi posted in her third year as a starter were impressive: 16.4 points per game, 4.4 rebounds, 3.3 assists and 1.4 steals. She attained a career-high 26 points against Queen of Peace and had 25 versus East Orange in the sectional final. Only twice in 29 games this season did Strambi fail to reach double figures.

Her story, though, is hardly about numbers. It extends way beyond that. Teammates were fond of her for her ability to calm them in stressful situations. She made them laugh. Strambi, too, had the ability to bring in fans.

For the county final, for example, 30 family members and friends were in the bleachers. Her grandmother, Rae, traveled from Florida. Her mother's co-workers from Morristown Memorial Hospital often were in attendance. Strambi's second cousin, Ann Marie Davies, the long-time Madison High School field hockey coach, was a regular at Morristown games.

"I'm glad I have the family I do," Strambi said. "The same goes for friends. We got a lot of support."

Strambi, who is hoping to play Division I basketball, comes from a sports family. Her father, Steve, and older brothers Stevie (19) and Matt (20) are golfers. Her mother, Debbie, plays paddle tennis. Strambi is a member of the Colonials golf team, whose top score for nine holes is 44. Her game is relatively solid but she admits that putting frustrates her.

As a 10 year old, she paired with Gabby Andretta, who went on to become one of the state's top field hockey players, to win a national doubles championship in paddle tennis.

"We're a big sports family," said Strambi, a fan of Derek Jeter. "I play golf because my parents say it's a lifetime sport. Paddle tennis was OK. My favorite was always basketball. I'd play in the backyard with my brothers. It was a lot of fun. They taught me much of what I know. They took it easy on me but I still cried. It was really competitive. I'd miss a shot and one brother would be mad. Another time, I'd make a shot a be a hero."

She assumed the role of hero on many occasions with the Colonials, taking charge in tough situations. For example, against East Orange in the sectional final, she accounted for more than half of the team's points. Strambi, whose nickname is Boo, is most fond of getting a rebound and racing up the court. She took care not to get "riled up" and made it a point to relax and listen to Kim (Calloway) and Kayla (Bush) when the going got tough.

"Elizabeth stepped up all the time," Pisciotto said.

"I think Elizabeth is a great leader," freshman guard Tara O'Neill said. "She keeps us together and composed. She hypes and energizes us."

As a student, Strambi prefers math and science and is considering majoring in engineering in college.

"I like that there's a right answer in math. There are no gray areas," she said.

Pisciotto feels that many great things lie ahead for Strambi.

"Elizabeth is so humble," Pisciotto said. "She appreciates everything and enjoys what she's doing. She's happy go lucky. I saw her a few days ago and she tells me how she misses basketball, the team, the coaches. To have her say that is enough. I hope all of her dreams come true."