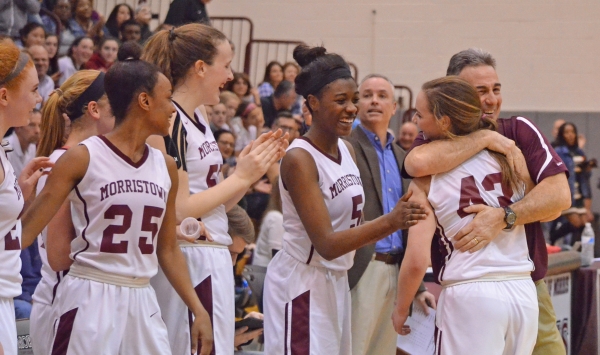 Photos by Maryann Harlow Morristown reveled in its first Morris County Tournament title in 37 years. The Colonials prevailed 47-23 over Jefferson in the final.
Rate this item
(11 votes)
Tweet

MORRISTOWN _ Lacking an "I" mentality and focused on unyielding "D," Morristown, coached by Jim Pisciotto, took its season to the limit.

"The girls understood their roles and put the team first," said Pisciotto, the 2017 Soar-NJ.com Morris County Coach of the Year. "Some of them started but came out in the first quarter. They never asked why. No one complained about anything. The chemistry this group had was great. They enjoyed each other's company."

Those elements translated into success for Morristown, the 2017 Soar-NJ.com Team of the Year. The Colonials made history, capturing their first MCT championship in 37 years. The sectional crown was their first since 2002.

"We saw what we could have done after losing in the (MCT) final last season," junior guard Elizabeth Strambi said. "Winning the MCT was a big goal. We wanted it. Everyone put in a little something extra."

According to Strambi, the last two weeks of the season were most memorable.

"The MCT. The state tournament. That two-week span was great," Strambi said. "We all worked together so well. Last year, we trusted each other. This season, we depended on each other."

Senior co-captain Kimberly Calloway, known for her stellar defensive abilities, emphasized how close the Colonials (26-3) were. Never did they criticize or question a teammate or a coach.

"Our team bonded so well," Calloway said. "We motivated each other every day."

It was the disappointment of having lost 48-27 to Morris Catholic in the 2016 MCT title game that helped propel the Colonials prevail a year later. They opened up the game with a 17-0 barrage en route to a 47-23 victory over Jefferson.

"I think we were really nervous last year because it was our first time in a long while in the championship game,” said senior Kayla Bush, who finished the game with 11 points, five rebounds and two blocks. “But, this year, with our experience, it really helped us early in the game. Getting off to a 17-0 lead was amazing. And, once we get the lead, we like to keep the pressure on and keep attacking.”

“Last year, we tried our best but it just didn’t happen for us,” said Strambi, the tournament MVP who finished with a game-high 15 points, three assists and three steals.  “Losing last year was hard for us but we kept the feeling at practice and I think that’s what really got us through.”

Poise, patience and teamwork were key

Calloway contributed five points and six rebounds to the triumph.

"I think we just had to worry, not about last year, but be poised on offense, pass the ball around and just work as a team,” Calloway said. “Jefferson is a good team. We are a good team as well. We had to be patient and poised and just listen to Coach Pisciotto. I’m glad we were able to bring a title back for our team. It feels great. We have a very good team, a great chemistry and I’m just happy to be a part of it.”

The incredible ride continued. Ten days after living up to their No. 1 seed in the MCT, Morristown won the North Jersey Section 1, Group IV championship by defeating East Orange. On March 8, Franklin, which went on to hoist the Tournament of Champions trophy, halted the Colonials' dream season.

Pisciotto's players lauded him for emphasizing defense. The man to man was fine tuned and frustrated many an opponent.

"Our coach is a huge defense guy," Strambi said. "He's big on it. We practice it a lot."

"I've always stressed defense," said Pisciotto, in his fourth year coaching the Morristown girls. "Ninety-nine percent of coaches agree. It wins games. Look at the teams in the Final Four. They're there because of defense."

Pisciotto took over the girls program after serving as an assistant for the boys for seven seasons under Ricky Osborne. Coaching with Osborne gave him the opportunity to be with his sons as well as watch them play. Former athletic director Kathy Perri suggested Pisciotto, who teaches at Morris Knolls, take on the girls program. Reluctant initially, he relented.

"Kathy kept saying 'Why don't you do it?'" he said. "I grew up in town so I figured it'd be easier to do it. I connected the dots and figured I'd give it a shot."

Pride in town and school

He was the perfect candidate, having led the varsity boys squad at Morris Knolls from 1995-2005 and the program at Villa Walsh from 1985-1995. Pisciotto played basketball and football at Morristown and wanted to instill the pride he felt for the town and the school into the girls.

"You represent your family, your school and the community," Pisciotto said. "I'm seen around town. The kids are, too. It was all very gratifying. Everything came full circle."

His coaching philosophy is "not set in stone." Pisciotto analyzed his squad's strengths and weaknesses and came up with a plan.

"I figure out what the team has and what will work for them," he said. "I see what every player is good at and put them in spots to be successful."

Making a march to the MCT final was the ultimate thrill for Pisciotto. As a senior in 1980, Pisciotto and the Colonials suffered a suffered a setback to West Morris in double overtime in the final.

"This was a special year," Pisciotto said. "All 12 kids worked really hard. We had six terrific seniors. They taught the younger kids and made them feel welcome. Many things fell into place. We were in the right place at the right time and probably had a little luck on our side."