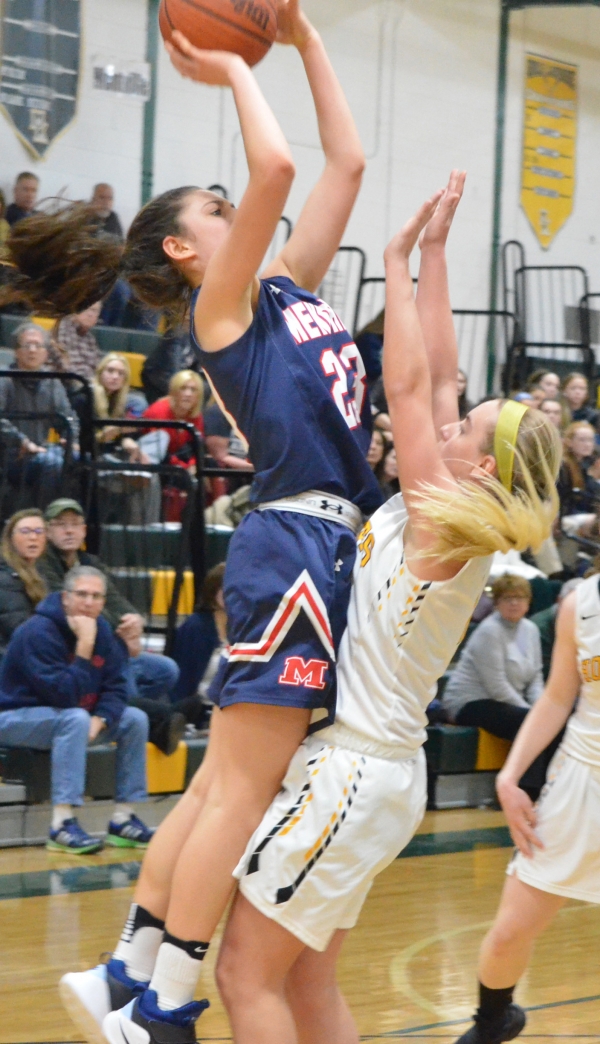 Meyers, a sophomore, made the transition from forward to guard look easy but there was plenty of hard work that led to her successful 2016-17 campaign.

An afterthought as a freshman forward when she averaged under four points per game, Meyers had a breakout season with 19 points, 8.0 rebounds and 3.0 steals a game from the guard position. Included in her highlights were hitting game-winning shots against Pope John and Ridge and scoring a career-high 26 points in a 53-43 decision over Roxbury on Feb. 23. She finished the year with 505 points.

"Joey has to be the most improved player in the county,” said Mendham coach Mark Gnapp. “She’s a tireless worker who developed her skill level to become a perimeter player. She has one goal in mind and works to keep getting better.”

A junior point guard, Selvaggi was the heart and soul of West Morris, helping the club to a 15-12 finish and the NJSIAA North 2, Group 3 quarterfinals. Selvaggi led the Wolfpack in scoring at 18 points a game, steals (6.0) and assists (4.2) and was second in rebounding with 5.0 a contest.

In addition to her outstanding stat line, it was her spirit of competitiveness, leadership and experience that had a positive effect on the club. Recalling the first game of the season when his team trailed by 10 at halftime, West Morris coach Fran Gavin turned to Selvaggi and asked her to take over. Although Pope John won the game, Selvaggi finished with a game-high 25 points.

“I had one senior and she didn’t have much experience. Everyone else on the floor was brand new,” Gavin said. “In the first half, she distributed the ball like she was supposed to do then, I asked her to take over the game, and she did. She can shoot, has a great handle, can defend anybody and is very disciplined. She’s the leader and everyone on the team looks to her."

Playing her role in Hanover Park’s system to perfection, Gammo, a senior guard, contributed every game with averages of 11 points, 3.4 assists, 3.0 steals and 4.0 rebounds a game to help the Hornets finish 25-3 with a third straight NJAC Liberty title and reach the NJSIAA Group 2 semifinals.

Equally adept at passing, shooting or going to the basket as well as being a dogged defender, Gammo’s 46 3-pointers and 91 steals were both team highs.

“Her court vision was exceptional and she was very good at finding the open player and getting the ball to her,” Hanover Park assistant coach Tara Kelly said. “By her stats, you can see how well rounded she was. In our program, she was expected to do a lot, and she did. If she wasn’t having her best offensive game, she was probably having her best defensive game.”

Long and athletic, Kelly routinely worked through double and triple teams and averaged 14.2 points, 9.8 rebounds, 2.6 steals and 2.4 blocks a game for Chatham. The junior center racked up 13 double doubles, including eight of the Cougars’ last nine games when the club was playing without starting guard Chloe Blanc.

Her career-high - 24 points - came against Morristown-Beard on Feb. 24. Four days later, Kelly had 22 versus Rahway in a state tournament game.

Mills, a 5-9 guard and forward, led 18-8 Morris Catholic in virtually every statistical category this season. An exceptional athlete who combines strength and quickness, Mills topped the Crusaders in scoring (10.0), rebounding (9.2), blocks (1.9) and steals (2.9) and was second with 3.5 assists per contest.

Despite being a sophomore, Mills also provided a leadership presence for a relatively inexperienced Morris Catholic squad.

“Danielle saw a lot of playing time for us last year, mostly as a rebounder, but this year she played a more significant role,” Morris Catholic coach Rich Fachet said. “She is a  phenomenal  athlete. I don’t know if there is a better athlete in the county. Her basic ability is phenomenal and we tried to take advantage of that both on offense and defense. She’s a total player and she can do everything.”

The junior guard displayed her versatility and did it all on the floor for Jefferson. A threat to score with her jumper, off the dribble or down in the paint, Langan parlayed her talents to lead the Falcons to a 23-5 mark, a spot in the Morris County Tournament final and the NJSIAA North 1, Group 2 semifinals.

“She is an incredibly hard worker and a year-round player who has become a better player, teammate and leader each year of her high school career,” Jefferson coach Jim MacDermid said.

Strambi, a junior, is the 2017 Soar-NJ.com Morris County Basketball Player of the Year. Strambi reached double figures in all of the Colonials' games but two.

She averaged 16.4 points, 4.4 rebounds, 3.3 assists and 1.4 steals. Strambi, a member of the golf team, scored a career-high versus Queen of Peace.

"Elizabeth is so humble," Morristown coach Jim Pisciotto said. "She appreciates everything and enjoys what she's doing. She's happy go lucky. I saw her a few days ago and she tells me how she misses the basketball, the team, the coaches. To have her say that is enough. I hope all of her dreams come true."