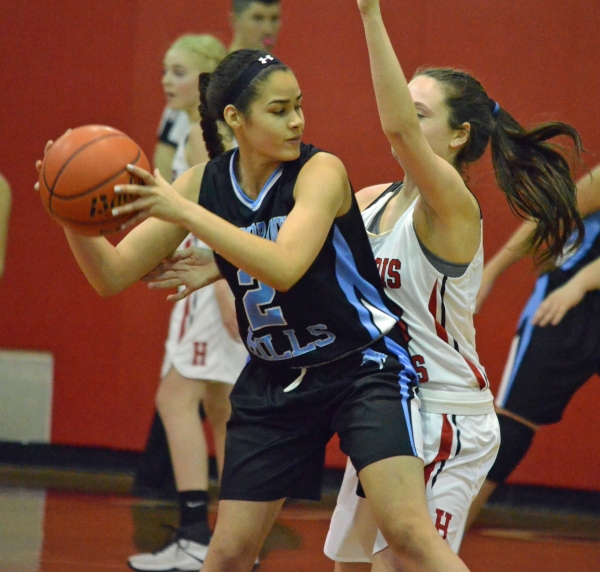 At the time, the Vikings were up by one point and all Diaz could think of was widening the lead. Forster yelled out, "What are you doing?"

At the conclusion of the game, a 29-28 Parsippany Hills victory over Morris Hills on Friday, Dec. 15, Diaz, of course, had mixed emotions, bearing a smile on her face and proud that the Vikings had won their season opener and yet a bit upset and teary-eyed about the decision she had made.

"Coach got made at me for taking that 3," said Diaz, a junior guard. "If we had lost, it would be my fault. It feels good that we won. I'm happy."

The Vikings used a 12-point run that bridged the third and fourth quarters to pull ahead, 27-25, with 3:55 remaining in the closing period. Diaz helped fuel that string of unanswered string, scoring two baskets, including the 16-foot jumper that snapped a 25-25 deadlock and put Parsippany Hills ahead to stay. Junior forward Amanda Gurth also came up big during the decisive run with a pair of close-range field goals, one of them a putback.

"I told our girls at halftime that we needed to cut into the deficit," Forster said. "We needed to get to a manageable spot. We had a lot of steals. Corinne had an important one at halfcourt. We got some timely baskets. Morris Hills pressured us on the perimeter and they were controlling us on defense. We had to drive and put pressure on them."

Parsippany Hills switched to man-to-man defense in the second half and that, too, had a major impact on the outcome. Jillian Rogers stepped up and played superb defense on Morris Hills' Victoria Aspiazu, limiting her to three points after halftime. Aspiazu scored nine points over the first two quarters, propelling the Scarlet Knights to a 19-11 edge at the break. At the halftime buzzer, Aspiazu, who ended with a game-high 13 points, netted a 3-pointer, launching the ball from halfcourt.

The Vikings, however, did not let Morris Hills take momentum from that dramatic basket. They chipped away after the Scarlet Knights' Cristine Coiro dropped in a layup 2:57 into the third quarter to put the home team on top by 10 points, 25-15. Gurth kicked off the Vikings' 12-point burst with a basket with 3:21 remaining in the third period.

"When Victoria made that 3-pointer (at the halftime buzzer), I thought it'd be a momentum booster," Morris Hills coach Brian Dillon said. "It did a little but we stalled. At 25-15, we let up a little. We're still learning to win. We're young and tentative. A lot of these girls were role players last season. The plays we made earlier, we didn't make down the stretch. That will come in time."

In the fourth quarter, Parsippany Hills held the lead by outscoring Morris Hills, 8-2. The Scarlet Knights had no field goals over the final 11 minutes.

"We limited our mistakes in the second half," Diaz said. "We were more aggressive and played better defense. Our coach's main thing is for us to go to the basket. If we miss, we can get a foul or put it back."

With 3:28 left and the Vikings ahead by one, 27-26, Gurth, a force inside, drew her fourth foul. That didn't stop her from battling for rebounds under both baskets. The Vikings were poised enough to hold on. There was the errant 3-pointer, though, by Diaz, who handled the ball with poise when point guard Sanjay Kao got into foul trouble quickly.

"I'm like 'No!'" Forster said of the 3-point attempt put up by Diaz as the scoreboard wound down.

"That's OK," Forster said. "Corinne did a lot of things for us tonight. She did very well. Everyone was probably a little nervous tonight. It's the first game. We'll take better shots. We'll improve."

Since then, the Vikings have struggled, losing three of their last four. Their win over Dover was another tense one as they triumphed by three points. Diaz and Gurth had 11 and 10 points, respectively.