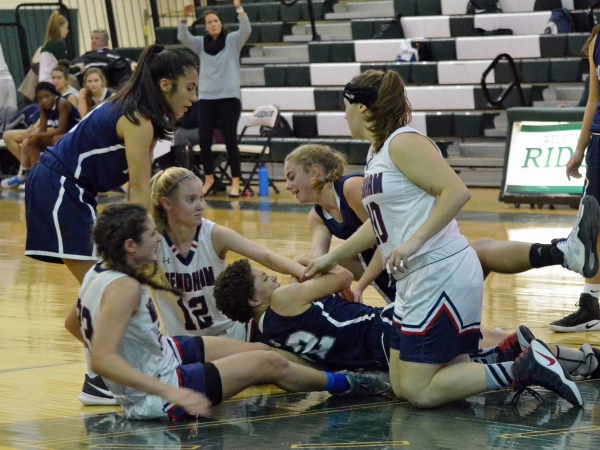 BASKING RIDGE _ Mendham's first game, marred by turnovers, lack of hustle and ineffective boxing out, was beyond ugly.

Montville put up 60 points against the Minutemen and held them to single digits in the middle two quarters. The outcome was upsetting to Mendham coach Mark Gnapp and, of course, his players.

Since then, the Minutemen have toiled to right themselves, posting wins in three of their last four games, including a 50-39 defeat of Pingry in first-round action at the Len Sepanak Memorial Holiday Basketball Tournament at Ridge High School on Wednesday, Dec. 27.

"We played very well in our last four games," Gnapp said. "We didn't play hard against Montville. We weren't prepared. That game helped us get better. It's going to benefit us in the long run."

Mendham (3-2) entered the tournament coming off a five-point setback to West Orange but shook it off and pulled away over the last 16 minutes after being tied, 19-19, with the Big Blue at halftime. Junior guard Joey Meyers fueled the Minutemen in the second half, scoring 17 of her game-high 25 points.

Many other elements contributed to Mendham's second-half showing, most notably the team's unwillingness to feel the way it felt following the 29-point loss to Montville.

"Once we start playing our game, we're fine," Meyers said. "We pushed the ball. We played tight 1-3-1 defense which pressures other teams a lot, especially the point guard. Our offense is aggressive. We made layups and had good looks. We don't want what happened against Montville to happen again. We've played so much harder after that."

The fourth period, in which Mendham outscored Pingry, 20-13, was key. The Big Blue was within striking distance for awhile and, with sophomore standout Kelsey Ransom pacing the attack, anything was possible. Meyers went into highly-driven mode in the fourth quarter, registering 11 points. Paige Kaplan had four points. The Minutemen netted 5-of-7 free throws over the last 4:26.

"Joey played great," Gnapp said. "Ransom was on her and they went at it all game. Joey toughed it out and came through for us."

The Meyers-Ransom matchup was intense. The two premier players had gone at it before, clashing during AAU. Meyers is on New Jersey United while Ransom is on the New Jersey Panthers.

"Joey is very, very good and plays at a high level," said Ransom, who had 18 points and took down 7 rebounds. "This was like AAU. It was more mental than physical and I love that. We were nitpicking. There was some pushing here and there."

Meyers, too, relished the chance to go up against Ransom.

"Kelsey was denying me hard," Meyers said. "That's why it was good to get points in transition."

Pingry (2-2) fell behind by four points in the third quarter. While that doesn't seem like much, Ransom detected the Big Blue might be waning.

"We were foggy mentally and that transfers to the way you play," Ransom noted. "If one player is lethargic, we all fall to that level. We weren't very energized at halftime. We needed to come out with a bang like Mendham did."

Meyer may have taken the game into her hands in the second half but her teammates certainly contributed. Kaplan finished with eight points as did Jessica Hall. Kaplan was adept as well at rebounding. Nikki Surella aided the Minutemen's fast start with five first-quarter points. Beyond that, Surella rebounded and went all out on defense.