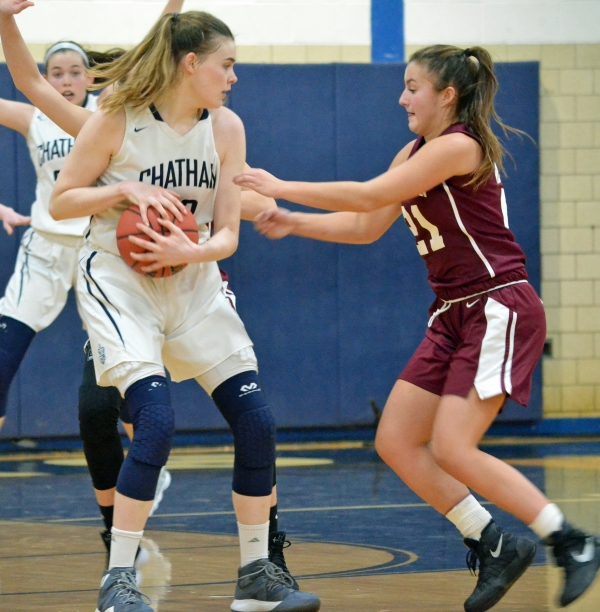 CHATHAM _ Nicole Ferrara had been coming off the bench for Morristown while waiting for a sprained ankle to heal.

Given her first career start, Ferrara, a junior guard, sought to make an impact against Chatham, a formidable foe in the United Division of the NJAC.

Ferrara, best known for her exploits on the lacrosse field, scored seven points to key a 14-point run that bridged the third and fourth quarters and had a significant impact on the Colonials' 36-26 victory over the Cougars on Wednesday, Jan. 3.

"I am so happy to be back," Ferrara said. "It was great to start. It was awesome. My teammates and coach are great. This was a huge win for us. Chatham is very good. They came out strong. We had to really step up our offensive intensity."

After a first half punctuated by errant shots and turnovers on both sides, Morristown (5-1) commenced what would turn out to be a decisive string of unanswered points. The Cougars led 17-16 following Michaela Ford's free throw with 4:48 remaining in the third quarter. Forty-five seconds later, was about 23 feet away from the basket with the ball in her hands.

Ferrara, admittedly "not a big dribbler," let go of her long-range attempt quickly, netting a 3-pointer at 4:06 to put Morristown ahead for good, 19-17. The next play, two minutes later, was even more rewarding for Ferrara because it required teamwork.

Jessica Willette passed to Ferrara, who traversed a wide-open path for a layup to move the lead to 21-17. Getting Ferrara open for the back screen was Elizabeth Strambi, who finished with 17 points.

"We ran it through," Ferrara said of the play that culminated in the layup. "Jess gave me a fantastic pass and I was able to finish. Elizabeth's screen was perfect. The 3-pointer was the first basket I made in the game. Our coach told us to keep shooting and the shots would fall eventually. That's pretty normal range for me. I put it up and hoped for the best."

Strambi, too, was satisfied with the well-executed play and the no-fear approach taken by Ferrara, committed to play lacrosse for Ohio State, when it was needed most.

"Nicole's a great player," Strambi said. "She's a huge part of our team. She's back and better than ever. I knew that 3-pointer was going in. We were agressive during that run. We all wanted to win. We got a lot of big baskets from everyone during that run."

Colonials coach Jim Pisciotto was elated to have Ferrara among his top five for the Chatham game. Ferrara was anxious to be in the mix after turning her ankle while rebounding during a preseason scrimmage against the JV squad.

"We're just getting healthy," Pisciotto noted. "We've had some girls out. Nicole has been good off the bench. She does a lot of good things for us."

Ferrara has played in four games, reaching double figures (13) versus Montclair Immaculate. She is one of the team's sharpshooters and has six 3-pointers. Scoring is her forte has evidenced by the 109 goals and 63 assists she has accumulated in two seasons of lacrosse.

The opening half of the game was frenzied with both teams exhibiting high energy levels that led to rushed and, ultimately, missed shots. Veronica Kelly scored both of Chatham's first-period baskets, including a 3-pointer from the right corner. Strambi had a bit of difficulty getting on track and made a layup with 33.5 seconds left in the first quarter to put Morristown, playing without 6-foot-2 center Kate Kolb, sidelined with a concussion, ahead, 6-5.

In the second quarter, the Cougars received four points from Tess Ford while the Colonials got four from Strambi.

"When you get into conference play, it's always like this," Pisciotto said. "It's a rivalry. Us vs. Montville. Morristown vs. Chatham. Morristown against Mendham. Emotions lead to silly things. We got some pretty good looks but we rushed it at first. Our shots didn't fall. Overall, we played well. We settled down and got a little breather when we had our run."

With 2:43 remaining in the game, Chatham cut its deficit to eight, 31-23, on Emma Frohnapfel's basket. Two more times, in the last 38.5 seconds, the Cougars trailed by eight yet could cut no further into Morristown's lead.

"We were all over the place at the beginning," Strambi said. "We finally relaxed and good defense kept us in the game. That's the heart of our game. Defense. We buy into it and that's good when we're not executing on offense."

Veronica Kelly ended with 7 points for Chatham (2-5) while Hannah Kelly had five.

View the embedded image gallery online at:
https://soar-nj.com/sports/basketball/item/1479-motown#sigProId0e22edd37c
More in this category: « Meyers, Mendham stay on track Colonials are top seed for MCT »