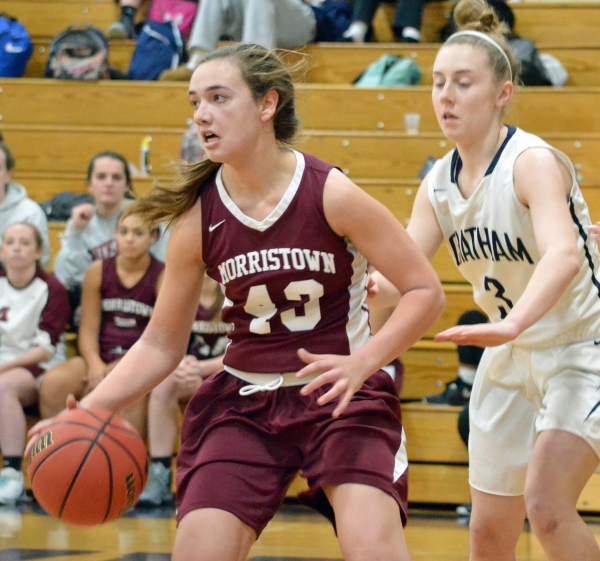 Photo by Sandy Seegers Morristown's Elizabeth Strambi, left, is pictured in a game versus Chatham earlier this season.
Rate this item
(5 votes)
Tweet

The top-seeded Colonials, awarded the No. 1 seed for the 2018 MCT at the seeding meeting held on Sunday, Jan. 21 at Villa Walsh, are ready to defend.

The 10-1 Colonials have a bye in the preliminary round and will play the winner of 17th-seeded Madison and 16th-seeded Morris Tech in the first round. Morris Catholic (14-0) received the second seed. Chatham (8-5), Montville (8-2) and Jefferson (9-3) were third, fourth and fifth, respectively.

Despite the graduation of three starters and several injuries, the Colonials remain a force in the conference, county and state. Nicole Ferrara, a junior guard, has been stellar since returning from a sprained ankle. Ferrara is a 3-point threat.

Strambi, now a senior, earned MVP honors for the 2017 tourney when Morristown defeat second-seeded Jefferson, 47-23. The MCT title was the first for the Colonials since 1980. In 2016, they made it to the final but fell to Morris Catholic.

Man-to-man defense is one of Morristown's fortes.

"It's the heart of our game," Strambi said after a victory over Chatham earlier this season. "We buy into it. It's good when we're not executing offensively."