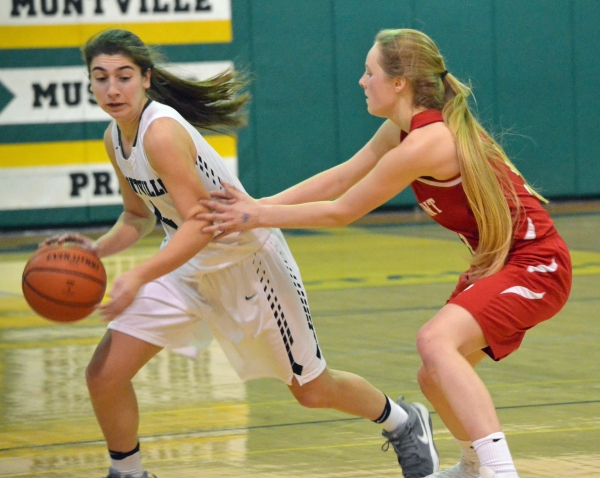 Photos by Sandy Seegers Montville's Bella Vito, on the left, brings the ball up in the fourth quarter versus High Point.
Rate this item
(10 votes)
Tweet

MONTVILLE _ Having active hands and talking on defense were what it'd take for Montville to upend Morris Catholic.

Those reminders, actually necessities, were written prominently on the whiteboard in the Mustangs' team room. They were also ingrained in the minds of the Montville players. Stick to the plan and the Mustangs could very well be rewarded.

As it turned out, the well-executed matchup zone was at the forefront of Montville's 47-28 victory over the Crusaders in non-conference action on Thursday, Jan. 25. Also prominent were Dani Campbell's 12 points and Emma Wax's 11 points, 11 rebounds, 4 assists and 2 steals.

"This is a huge win for us," said Wax, a sophomore guard. "Morris Catholic was undefeated coming in. This was a statement game for us. We showed we can play with anybody. We really emphasized talking and playing hard."

The win, which improved the Mustangs to 11-2, is believed to be the first over the Crusaders in the history of the program. That's why the celebration, which occurred in the team room, featured "dancing, cheering and a lot of jumping around," according to Wax.

Montville coach Derek Lynn was immensely pleased by his team's effort against Morris Catholic, which well respected and tough year after year.

"We've seen them on film," Lynn said. "They move the ball well. They have shooters everywhere. If we didn't do those things that were on the board, it could have been a very long night. We knew they were unbeaten and had a higher seed than us for the county tournament. We could get 50 or more power points for the state tournament by beating them. We're power-point hungry."

That hunger was evident immediately as Wax opened the game with a 3-pointer. After that, Montville (11-2) reeled off 10 more points and gained a 13-0 lead. Campbell, a junior guard, and Jordan Strickland also netted baskets from outside the arc over the initial eight minutes. The Crusaders (15-1) received a 3-pointer from Danielle Mills and field goal from Emily Schum in the first period.

The Mustangs were in double digits in the second quarter as well, outscoring Morris Catholic, 10-7, behind Amanda Gorski's six points. After the third quarter, Montville was ahead, 31-19. The Mustangs admitted that they feared a comeback. However, they had a 16-point showing in the closing period to gain the upset. Six different players scored. Wax had four points.

"It's very exciting," said the 6-foot-2 Campbell, a junior guard who contributed a trio of 3-pointers. "I'm not really surprised that we won. We worked hard. We deserved it. All of the Morris Catholic players are athletes. They can do a little bit of everything. We had to focus on everyone and on our defense.

"We had to keep up our positivity, even on the bench. We were hyped up and cheered each other on. There was a lot of energy."

Versus the Wildcats, Montville built an 18-5 first-quarter advantage and were up, 22-13, at halftime. High Point came back and tied it. Gorski snapped the last deadlock of the game 59 seconds into the fourth quarter with a layup, putting the Mustangs in front, 30-28.

Freshman guard Bella Vito made a difference with her free throws in the last 4:07, netting 3-of-4 attempts. Dani Campbell's block with 3:30 remaining was critical as well. With 2:02 remaining, Strickland made a steal and cruised in for a layup to send Montville ahead, 33-29.

The win over HIgh Point was just as gratifying as the one over Morris Catholic.

"These types of wins build confidence and prepare us for upcoming tournament games," Lynn said. "We're challenging ourselves. With Chatham, Mendham and Morristown in our conference, we're battle tested."