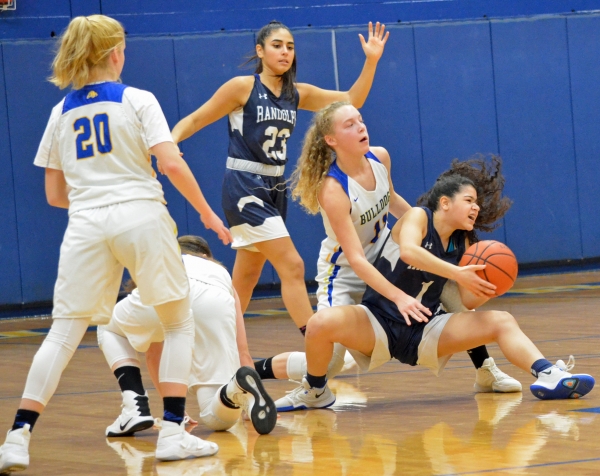 Photos by Sandy Seegers Randolph's Angeleen Mulero, No. 1, tries to maintain possession of the ball while being pestered by Butler's Melissa Konopinski.
Rate this item
(5 votes)
Tweet

Rarely do the Rams, in spite of their inexperience, allow a substantial advantage to slip away.

On Thursday, Feb. 8, Randolph in command by 17 points after three quarters, may have gotten a bit too comfortable and allowed Butler to come within five.

The undesirable circumstances caused the Rams to dig deep and they emerged with a 57-50 victory over the Bulldogs in non-conference action.

"The lead wasn't taken seriously," Randolph coach Pete Torres said. "The girls were looking for their own shots and putting bad ones up. It turned into a dogfight. Because we're so young, we never know what we'll get. We struggle with remembering how young we are."

Butler, spurred by Sam Beck's eight points, Kaysey Scott's seven and much determination, outscored the Rams 22-11 in the closing period. Randolph made 5-of-9 free throws, enabling it to close out the win. However, there were many tense moments. The Bulldogs (9-11) cut their deficit to five three times, including 45-40 when Beck made a close-range basket with 23 seconds left.

"We're usually able to maintain leads but we made sloppy mistakes," said Rams junior forward Julia Wiersum. "Effort wasn't the issue. We just forgot small things. For me, I stopped boxing out. Then I calmed down."

"It hit us when they were coming back," Randolph freshman Angeleen Mulero said. "There was too much up and down. We need to stay at the same level. There wasn't enough focus."

The Rams (11-10) were still flying high after suffering a one-point setback to West Morris on Tuesday. Wiersum, who had two points versus the Wolfpack, finished with 11 and Mulero, a freshman, topped Randolph with 14. Having Wiersum in double figures was encouraging because she had been struggling.

"Julia had a nice game," Torres said. "As one of the oldest players we have, she was taking on too much. She was putting pressure on herself to carry the team. Maybe she realizes it now."

Wiersum is one of three juniors among the Rams' top six. The others are a freshman and two sophomores. And, yes, she knows she was taking on a lot of responsibility.

"I've been trying to take control and set an example," she said. "I've been slumping the last few games. My game has been off. Driving. Dribbling. Everything. This was a good opportunity to get back where I was at the beginning of the season."

Mulero, who moved to Randolph from East Stroudsburg, Pa., attained double figures for the sixth time this winter. She joined the starting lineup in the sixth game.

"Angeleen has been dynamite," Torres said. "She runs the show for us. She's one of our leading scorers and leads the team in assists."

The loss was a heartbreaker for Butler, which entered the game with a win over Pequannock. However, coach Kim Wilson was pleased with the Bulldogs' performance.

"We're getting better every game," Wilson said. "We're playing bigger schools, a lot of tough independents, to get us ready for the states. We didn't back down. It was never really out of reach. Our kids are the salt of the earth. They work hard. Everyone contributed something. It came down to Randolph making free throws. Still, it was a great effort. Little things are turning into big things."