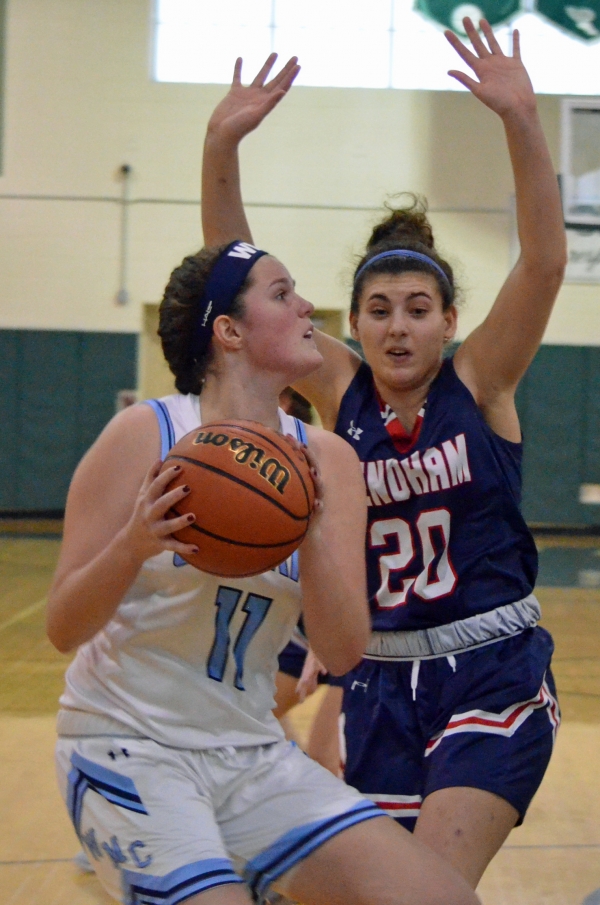 BASKING RIDGE _ The lead changed frequently when Mendham and West Morris clashed on Dec. 14 in a season opener.

The Minutemen ruled the first quarter and the Wolfpack had the upper hand in the second period. West Morris had a slim one-point edge at halftime. And, the third quarter was tense, too, as the sister schools stayed close. It was uncertain until the end but then the Wolfpack emerged with a six-point win.

Fifteen days later, the scenario was completely different as Mendham, dominant on the boards, took a commanding lead over the first eight minutes and went on to prevail, 46-36, in the third-place game at the Len Sepanak Holiday Tournament.

"The first time we played it was much different," said Hilary Klimowicz, Mendham's first-year head coach. "This is a testament to how our team can play. It was a team effort, especially with rebounding. All five players needed to body on someone and they all did it. We went to the basketball. We showed quite a bit of maturity for a young team."

Mendham, behind five first-period points by senior Joey Meyers, raced out to a 16-2 lead. Klimowicz attributed the quick start to "energy" and the fact that the Minutemen "picked West Morris up in full court." Meyers, the lone returning starter, added six more of her 19 points in the second quarter. For West Morris coach Fran Gavin, the setback was upsetting.

"We played one quarter today - the fourth," Gavin said. "Even then, the girls had their heads in the clouds. The first time around, we played all four quarters. It was a good, competitive game. Both teams were focused and played hard. Everyone was playing too much in the moment. There was too narrow of a focus and things were very individualized.

"We needed to see the 10 (players) on the floor rather than two and anticipate what would happen next. When we get those two elements down, this team will do nice things."

It was evident that the Minutemen came out wanting to control the rebounding. They positioned themselves well and boxed out. They didn't allow second shots and used their rebounding prowess on the defensive end to power their offense.

"We rebounded great," Meyers said. "We did well with transition and we pushed the ball. I wasn't really surprised by the lead because we've been working so hard. We let defense lead to offense. It's a huge game every time we play West Morris. It's a battle."

Although Mendham was in front by double digits for much of the game, West Morris rallied in the fourth quarter. The Wolfpack cut their deficit to eight points, 44-36, on Mackenzie Selvaggi's 3-pointer with 45.6 seconds remaining. The Minutemen boosted their advantage back to 10 points on two free throws with 34.4 seconds left. On the ensuing trip down the floor, West Morris was whistled for traveling, squashing its chance to further close the gap.

"West Morris can go on runs," Klimowicz said. "They came back at the end. We had to stay full steam ahead. We couldn't look back and we couldn't let up."

"At the end, we played with urgency," Gavin said. "We were lacking in the first three quarters and couldn't recover."

Lexie Naval and Shannon Timoney chipped in with eight points apiece for the Minutemen (3-4). Faith Pappas led West Morris, which reeled off five wins before dropping the last two, with 13 points and Selvaggi, a freshman, followed with eight.

Mendham and West Morris, which compete in the NJAC-United Division, will meet in a conference game on Jan. 24. They could share the same court two more times as well if they oppose one another in Morris County or state tournament games.

View the embedded image gallery online at:
https://soar-nj.com/sports/basketball/item/1551-mendham-gb#sigProId350a99907f
More in this category: « Mo-Beard fends off Panthers Gibbs has 1,000 reasons to smile »