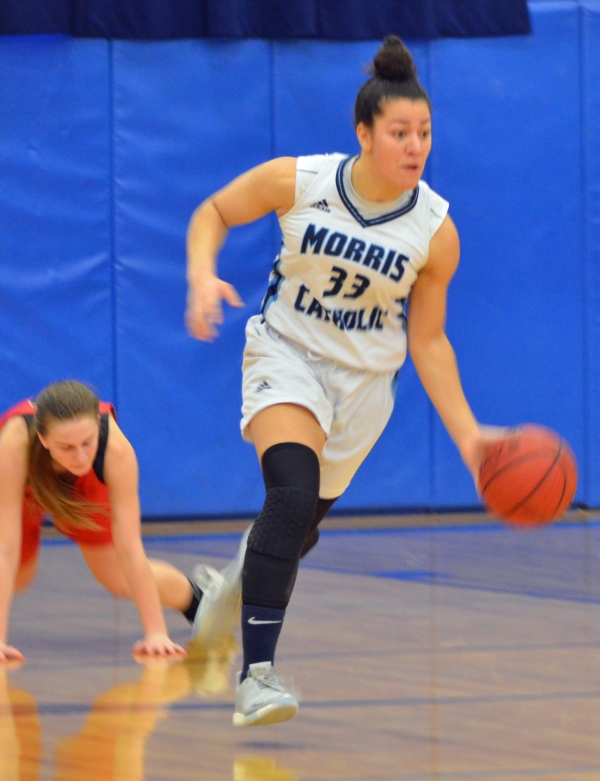 DENVILLE _ Mimi Rubino, as always, tied back her hair and piled it high on her head when Morris Catholic clashed with Morris Hills in a Morris County Girls Basketball Tournament first-round game on Saturday, Feb. 2.

Rubino, a junior guard, thought about one of her former coaches, Bob Caprio, several times that day, recalling the inside jokes they shared, in particular the one about her wavy brown hair, which falls almost to her waist when it's down.

"Coach Caprio kept telling me he was going to take scissors and cut it all off," she said with a smile while remembering the former Crusaders assistant coach who passed away on Tuesday, Jan. 29. "It's kind of heavy when it's up. I'm used to it."

This time, it was Rubino's heart that was heavy as she spoke about Caprio after scoring a career-high 29 points in Morris Catholic's 68-35 victory over Morris Hills. She, like the entire Morris County sports community, was stunned by his death. She and her teammates attended Caprio's wake on Feb. 4.

"This has definitely been hard for the team," Rubino said. "He had a light spirit. He cheered us up. I was close to Coach Caprio. Many of us were. He definitely united us."

The atmosphere for the game versus was the Scarlet Knights was subdued. Caprio, who left the sidelines along with head coach and close friend Rich Fachet at the conclusion of the 2017-18 season, was on many fans' minds at the second game since his passing.

Caprio, the former long-time athletic director at Parsippany Hills, had a passion for the MCT. He was in the midst of planning a ceremony to honor past coaches of boys teams that had captured MCT titles.

Senior Danielle Mills played three of her four years at Morris Catholic under the guidance of Fachet and Caprio. Mills said the Crusaders found out about Caprio's death the day after on a group chat.

"We were all taken aback," Mills said. "No one could believe it. Coach Caprio was a goofball kind of coach. He joked around with us, made things fun. Before games, he'd remind us to catch the ball with two hands and to make good bounce passes. He was the type of person who put a smile on your face. We love him. He will be missed."

Rubino, who missed two practices due to a stomach virus, got off to a slow start, missing a trio of 3-point attempts in the opening quarter. By the second period, Rubino was on her game, scoring 12 points to help second-seeded Morris Catholic gain a 30-8 halftime lead. She kept it up in the third quarter, adding 12 points. Rubino made five steals and was 4 for 4 from the free throw line.

"We played like we know how to play," Rubino said. "We were running to the ball. We got the ball to each other. There was a lot of teamwork."

Mills felt that same way. Teamwork, lacking at certain junctures this season, was crucial to the win and will be important in coming games.

"We've been on and off," Mills said. "In our last game (Villa Walsh), we were a second-half team. It was a little stressful. We all know we have to contribute. We've got our first MCT game out of the way. Now it's wins, wins, wins. We're not going to lose anymore."

"We have a good shot at the MCT title," Rubino said of the Crusaders, who claimed their last county championship in 2016. "We split the season into three parts - conference, county and state. We want to win all of them."