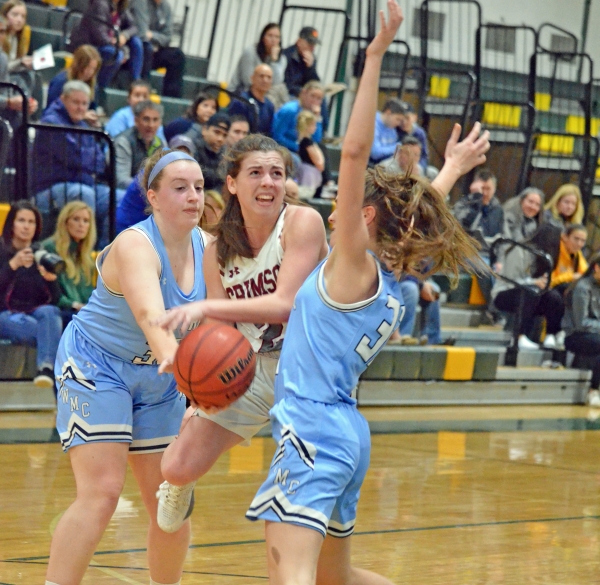 Rella, a senior guard, tends to always go all out but this was an extra-intense effort. With the Crimson holding a six-point lead 1:37 into the period, the 5-foot-2 Rella, unguarded, went up - extraordinarily high - to take down a defensive rebound. Less than two minutes later, she made a steal. Not for one millisecond did Rella let up.

The performance by Rella was representative of the entire Morristown-Beard team: Relentless and driven. Because of it, the third-seeded Crimson, who harbored unpleasant memories of their first-round loss to West Morris in a 2018 Morris County Tournament first-round game, earned a 69-53 over the Wolfpack in MCT quarterfinal-round action on Saturday, Feb. 9.

"We worked so hard all summer," Rella said. "We were strong in the fall league. This is unfinished business for us. We want to show we're here to win. We're capable of it."

Last year's setback to West Morris had a double sting. Not only did Morristown-Beard make an early exit, it was playing without Bridget Monahan, who was sidelined with a broken hand. Monahan, a senior guard, was a huge presence this time around and was one of three Crimson players in double figures with 18 points.

Morristown-Beard, which has won eight of its last nine games, was clearly out for revenge after the 69-31 defeat at the hands of the Wolfpack. Every possession had purpose and each girl was focused.

"I'm not going to lie," Morristown-Beard coach Mike Sturgeon said. "We wanted revenge. The front page of our scouting report was the boxscore from the West Morris game. This is it. Unfinished business. We're coming back for you. These kids remember stuff."

Saturday's game, however, was one to remember as the Crimson (18-2) assumed control early and did not relinquish it. Morristown-Beard, whose opponent will be No. 7 Morristown in its first MCT semifinal appearance, raced out to a 19-11 advantage behind eight first-quarter points by Monaghan (18 points). They went into halftime on top, 30-24.

Olivia Omelczuk scored 14 of her 23 points in the second half for the Crimson. She had the initial seven points of the third quarter, including a 3-pointer that she banked off the glass 56 seconds after the break.

"We wanted to go out and hammer them in the second half," Omelczuk said. "This was a big game. We wanted to leave it all on the floor. We had to if we wanted to advance. We had to stay focused which is what we did."

Erin Martin (16 points) stood out in the fourth quarter with six points while Monaghan had seven. Martin indicated that it was ball movement which enabled Morristown-Beard to be successful from start to finish. Another factor was Morristown-Beard's desire to seal the win and move on to the semifinals.

"It's just unfinished business," Martin said. "That's it. We wanted this last year. The seniors pumped us up throughout the week. They kept saying we could do it. Our goal was to get past this and to move on."

Rella beamed when reminded about the second-period rebound and her non-stop hustle.

"Our coaches kept saying the guards needed to go in the lane," Rella recalled. "It was four on two. No one was on me so I crashed (the boards). The whole team was on fire. We wanted this."

Sturgeon spoke of Rella's value to the team, noting that she didn't start several games. Rella was upset she wasn't among the first five and asked what she could do to contribute.

"We need Gianna out there. She's our sparkplug, our Energizer Bunny," he said. "She doesn't get many points but her energy is a big thing. Gianna has no numbers really so she's so overlooked."

For West Morris, Mackenzie Selvaggi, a freshman, had 17 points. Five of Selvaggi's baskets were from outside the arc.

View the embedded image gallery online at:
https://soar-nj.com/sports/basketball/item/1559-crimson#sigProId27ea4a8e34
More in this category: « Crusaders triumph in time of sorrow Morristown stuns No. 2 Crusaders »