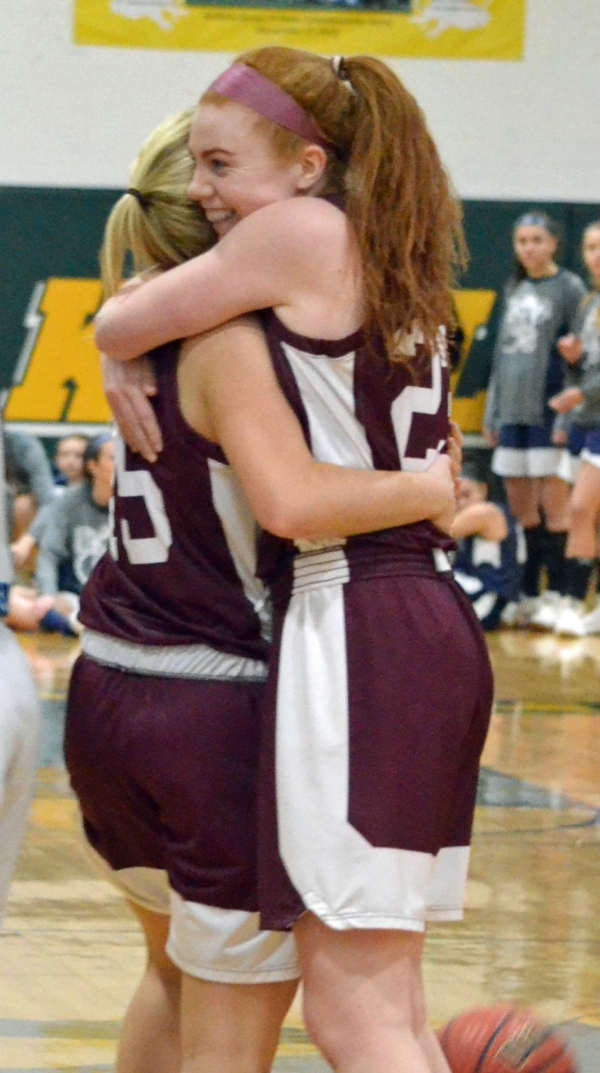 Those six words are entrenched in the minds of the players on the Morristown girls basketball team. Each time the Colonials exit their home locker room, whether for practice or a game, they jump and tap a sign that bears those repetitive words.

"We think about it a lot," said senior guard Nicole Ferrara, whose 3-pointers, along with Kolby Lynch's spirited play, helped Morristown rally in the third period en route to a 49-42 upset of second-seeded Morris Catholic in a Morris County Tournament quarterfinal on Saturday, Feb. 9.

"We're playing for the seniors, for each other. The seniors may not have another chance to do this."

That's why the Colonials, trailing 24-20 at halftime, turned it up in the third period. Ferrara, bound for Ohio State University on a lacrosse scholarship, nailed a 3-pointer with 1:30 remaining in the third quarter to put seventh-seeded Morristown in front to stay, 32-30.

Ferarra's trey commenced a nine-point run, one that extended into the fourth quarter. Lynch, out all of last season with a torn ACL, had nine of her 12 points in the third period, including a critical layup following a rebound with 24.7 seconds left. Ferrara ended the third stanza in dramatic style, hitting a 3-pointer at the buzzer. The ball bounced high off the rim before trickling through the net.

"That was a lucky one," said Ferrara of the 3-pointer. "I got a great pass from Katie McGuinness and shot. I think that gave us more momentum. We were super hyped. It was like 'Let's do this.'"

For Lynch, a junior, being on the court was much better than sitting on the Colonials' bench.

"This is my first time here, my first year on varsity," Lynch said. "It's so much different being in the game than being on the sideline. I fed off all of the energy. I went off of it and played for the team."

Colonials coach Jim Pisciotto was elated about the comeback and the victory it produced as well as for Lynch, new to the spacious gym at Morris Knolls High School.

"We saw an opportunity and what could happen," Pisciotto said. "We got the ball to Kolby. She can make 3s. She can drive. Kolby didn't get to play last year. Now, she's picking and popping."

According to Pisciotto, Morristown, which adjusted to the graduation of four-year starter Elizabeth Strambi by using Tara O'Neill, Morgan O'Neill and Grace Godfey at point guard, fell behind because it was rushing shots, not playing team basketball, not moving the ball well and not boxing out.

"They were killing us on second shots," he said.

Composure, said Lynch, was key for the Colonials.

"I was more excited than nervous," Lynch said. "This was a great environment to play in. Coming out of the locker room at halftime, we had to focus on our shots, keep the lead and stay calm."

The game was tied three times in the first quarter then Morris Catholic began pulling away. After O'Neill made it 12-12 with a baseline move with 1:06 left in the period, Sanai Newell had a three-point play. Newell scored after three misses. She then took a pass from Mimi Rubino and scored for 17-12 with 0.4 seconds remaining. The Crusaders further distanced themselves by getting the first basket of the second quarter. It was a low-scoring second period for both teams but Morris Catholic retained the edge.

"Don't look at our record," Ferrara said. "We prepared so much for this. We've improved from the first game until now. It's crazy how much we've grown."

***CHECK BACK FOR PHOTO GALLERY***