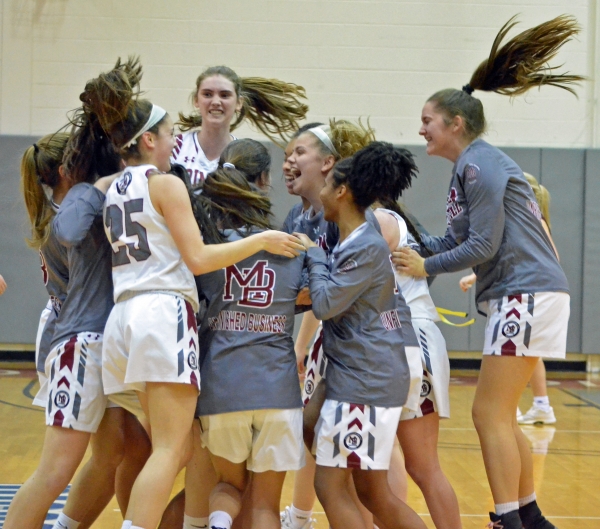 RANDOLPH _ The text from Gianna Rella had an emotional impact on each and every one of Morristown-Beard’s players.

Rella, a senior, sent the encouraging words from a bed at Overlook Hospital, where she underwent an appendectomy five and a half hours before the Crimson’s first appearance in the Morris County Tournament semifinals on Friday, Feb. 15 at County College of Morris. Morristown-Beard's players read her text in their group chat right before taking to the floor for warmups.

You've got this. I'll be there for the final.

It was apparent that third-seeded Morristown-Beard, which will meet top-seeded and defending champion Chatham for the title on Friday, Feb. 22 at 7 p.m. at CCM, missed the exuberant senior guard as it struggled through the first half of its game versus No. 7 Morristown before ultimately gaining a 32-30 win.

Rella’s absence, however, wasn't all the Crimson (20-3) had to overcome to land a berth in the final. The Colonials applied effective high-pressure man-to-man defense and held a five-point halftime lead. Add in some nerves, the experience of playing before a larger-than-usual crowd in a cavernous and it's easy to understand why this wasn't a typical game.

“We were upset about Gianna, of course,” said senior guard Bridget Monaghan. “That text had all of us in tears. We were like ‘Do it for G.’ It really helped us. This was not one of our best games.”

At halftime, Rella appeared in the locker room via FaceTime and listened to the pep talk given by coach Mike Sturgeon. That, too, touched her teammates and made them determined to turn things around in the second half. Rella normally is a key component in the huddles, saying "Crimson on three" before everyone follows with "1-2-3 Crimson." Right before the players exited the room at the break, Rella did her part via cellphone and her teammates immediately responded with enthusiasm then took that energy out on to the court.

"Gianna is our lifeblood," said Sturgeon, who found out that Rella was hospitalized at 2 a.m. on Thursday night and never went back to sleep. "She doesn't light up the scoreboard but is as valuable as they come. She's a big part of our gameplan."

Morristown-Beard trailed, 18-13, but went on a nine-point run over the first 5:20 of the third quarter to gain a 22-18 advantage. Monaghan had six of 10 points in that burst, dropping in two layups and getting a basket off a putback to put the Crimson on top, 19-18. Erin Martin's 3-pointer capped the run.

The closing period was tense as the Colonials, outscored 11-2 in the third period, showed no quit. Olivia Omelczuk had her lone field goal, a 3-pointer, 11 seconds into the closing quarter to extend Morristown-Beard's lead to seven, 27-20. Morristown received a free throw from Elizabeth Mongey before Nicole Ferrara netted a 3-pointer to bring the Colonials within three, 27-24. Soon after, Ferrara sank a pair of foul shots which enabled Morristown to pull ahead, 28-27. Senior guard Christina DeMattheis converted a pass from Martin, boxed in by defenders, into a layup with 1:42 left, allowing the Crimson to regain the lead, 29-28.

Over the last 19 seconds, Morristown-Beard connected on 3-of-4 free throws for 32-28. Morristown's Aziah Adams then went in, uncontested, for a layup at 3.8 seconds.

"We were in a situation where nothing went right for 16 minutes," Sturgeon said. "We had to change things and run our offense. Morristown plays good hard-nosed defense. It's as good as it gets. Morristown wants 30 possessions in a game. We want 60. We had to adjust."

Rella watched the entire game, the last half of it live, thanks to Sarah Bregna, a former player. There also may have been another factor in the Crimson's victory, thus far the biggest in their school's girls basketball history. On the way to the semifinals, Morristown-Beard players sipped a Starbucks acai drink, Rella's favorite.

"I figured we could come back," Monaghan said. "We had it in us. This feels incredible. It's our first time at CCM. We always hoped to be here. We have high hopes for this season."

Chatham, competing in the Final Four for the 12th time, earned the right to defend the MCT crown by defeating fourth-seeded Hanover Park, 42-38, behind 17 points by Maddie Hartnett.

This semifinal was a nailbiter as well, with the Cougars (18-5) in control at halftime, 23-21. The score was knotted on three occasions in the second half. One minute and 27 seconds into the fourth quarter, the Hornets' Brielle Junda knocked down a 3-pointer for 32-32. Two free throws by Kelsey Stites ensued and Hanover Park led, 34-32. A three-point play by Hartnett put Chatham in command to stay, 35-34.

Still, the game was far from over. Olivia Mathern, a senior forward, had her second 3-pointer with 4:50 remaining to keep the Cougars ahead, 38-34. The Hornets fought back and, with 1:55 remaining, Stites (15 points) made a layup to make it a one-point game, 39-38. Ultimately, Chatham netted 3-of-4 free throws over the last 11.9 to seal the win.

Chatham coach Joe Gaba deemed Mathern's 3-pointer to be one of the plays of the game.

"I try," said Mathern of her long-range shooting ability. "We all shoot a lot of 3s. We got a lot of opportunities because Maddie and Tess (Ford) drive a lot."

Mathern acknowledged that "there was a lot going on at the end." She said that the Cougars were able to move on in the tournament by "talking to each other" and "staying calm."

Gaba attributed his squad's play in the semifinals and this season to their defense, noting "We'll defend the floor until the last horn goes off" and to "their love for each other."

"They're close on and off the court," Gaba said. "They do everything together. You want to go into battle with people you trust completely."